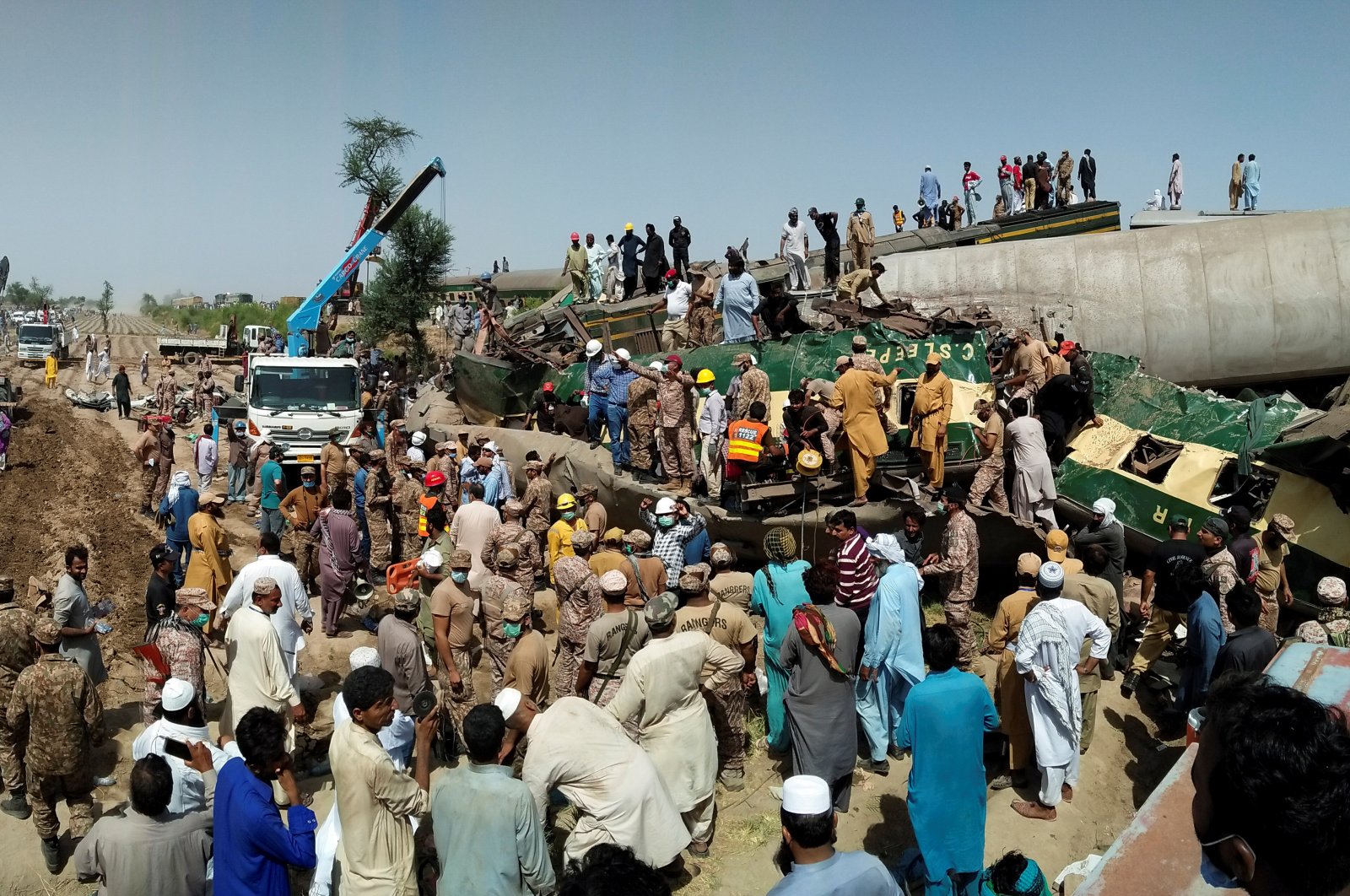 Paramilitary soldiers and rescue workers gather at the site following a collision between two trains in Ghotki, Pakistan June 7, 2021. (Reuters Photo)
by Agencies Jun 07, 2021 9:22 am
RECOMMENDED

A collision between two express trains in southern Pakistan on Monday left at least 62 passengers dead after some of the casualties died of injuries sustained in the crash, local officials said.

A train derailed in the town of Ghotki before dawn on Monday and another one coming from the opposite direction rammed into it. The reason for the initial derailment is not yet clear.

"We fear more people may die,” said Usman Abdullah, local administration chief in Ghotki. "Some of the injured people are in a critical condition,” he said.

The operation to find survivors and bodies in the wreckage had been completed and the track would be reopened today, said Syed Ijazul Hassan, a spokesperson for the state-owned railway operator.

The Millat Express and Sir Syed Express trains were carrying more than 1,000 passengers.

According to local media, some of the passengers were traveling by the Millat Express train to attend a wedding party but it was unclear whether they were among the dead or injured.

Pakistan’s prime minister expressed his deep sorrow over the tragedy. Imran Khan said on Twitter that he had asked the railway minister to supervise the rescue work and also ordered a probe into the crash.

Officials at Pakistan railways said they had ordered an investigation and rescue work was still in progress. Aijaz Ahmed, the driver of the train that collided with the derailed train told Pakistan's Geo News TV that on seeing the derailed train cars, he tried his best to avoid the accident by braking but failed. He did not explain how he survived.

Officials said at least 50 passengers had been transported to the hospital, where some of the passengers were listed in critical condition. Malik Aslam, a local villager, told Pakistan's Geo News TV that about 100 people were injured and he counted at least 30 bodies of passengers during the rescue and recovery work.

Train accidents are common in Pakistan, where successive governments have paid little attention to improving the poorly maintained signal system and aging tracks.

In 1990, a packed passenger plowed into a standing freight train in southern Pakistan, killing 210 people in the worst rail disaster in Pakistan’s history.

At least 75 people died when a train caught fire while traveling from Karachi to Rawalpindi in October 2019, which officials later blamed on a fire caused by a short-circuit.

At least 19 members of a small Sikh community died in a collision between a bus and a train in Punjab's Sheikhupura district in July last year.