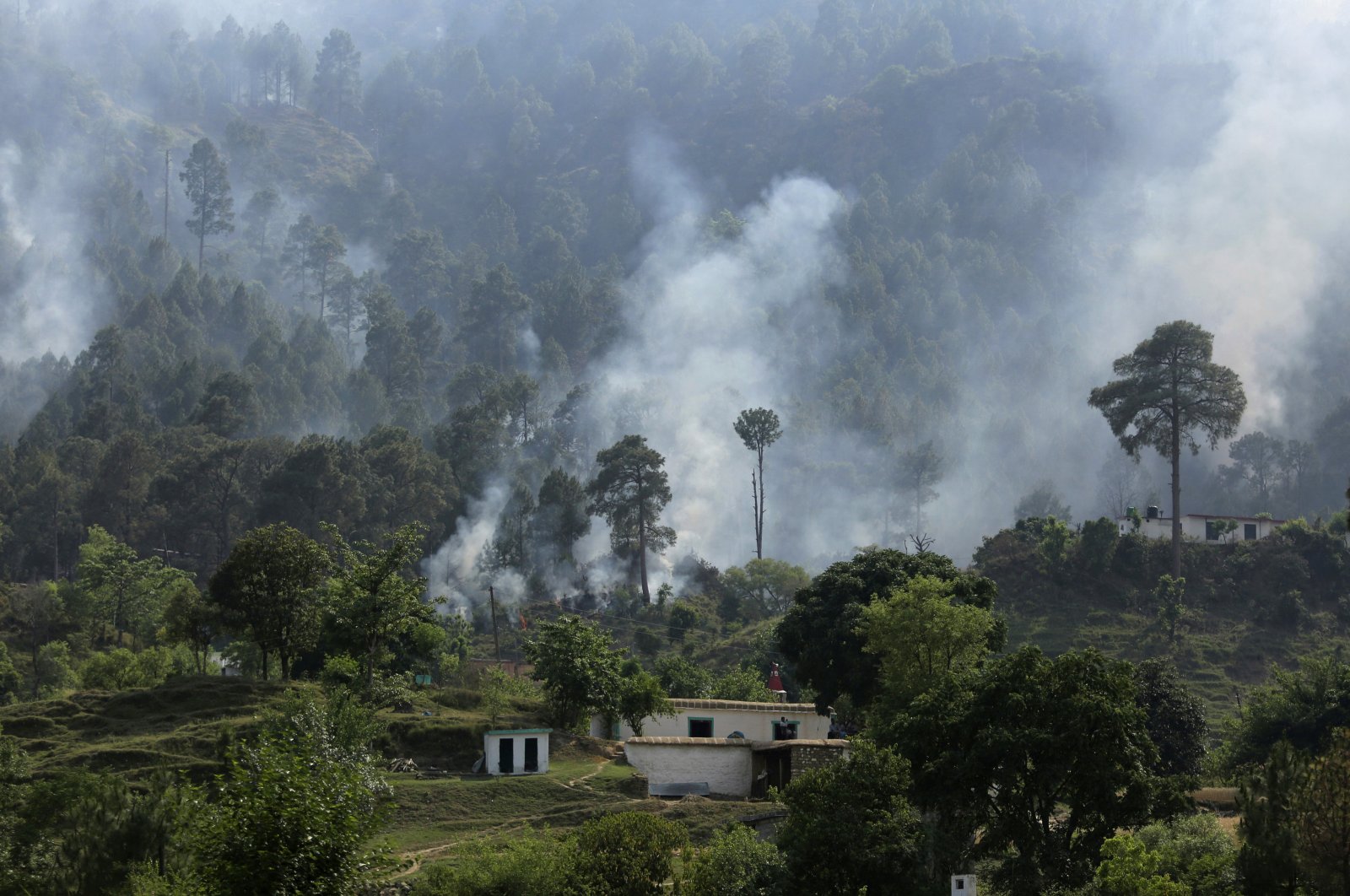 Smoke rises from a mortar shell fired from the Pakistan side of the border in a civilian area at Bhawani village at Nowshera sector, along the highly militarized Line of Control that divides the region between India and Pakistan, May 13, 2017. (AP Photo)
by Anadolu Agency
Apr 05, 2021 3:23 pm

Salamat Ullah told Anadolu Agency (AA) that a school and mosque were among the gutted structures, while more than 18 families were left homeless. He said the fire, which started around 1 a.m. local time (7:30 p.m. GMT) in the Maratha Mohalla area of Jammu, also destroyed his shop. He was appreciative of the local police's help during the crisis.

Jammu police chief, Chandan Kohli, said the fire started in a junkyard and spread to nearby shacks, and fire tenders were pressed into service. Massive fires have regularly erupted in Jammu areas inhabited by the Rohingya Muslims of Myanmar.

Five huts belonging to the persecuted community were gutted in the Narwal area on the night of Feb. 4 last year. In the same area, at least 70 makeshift settlements were destroyed, while three children and a woman were charred to death on the night of Nov. 25, 2016.

The administration at the time announced that it would be taking legal action against a person who had rented out a plot to the Rohingya. On the site of the latest fire, which also houses migrant laborers from some Indian states, as many as 200 shacks were razed in a massive fire in June 2019.

About 41 of the shanties belonged to the Rohingya.

More than 700,000 Rohingya fled to neighboring Bangladesh in 2017 as the Myanmar military launched a crackdown that saw villages being burned down, extrajudicial killings and rape. Last month, the Jammu and Kashmir government – now directly ruled by New Delhi after being stripped of autonomy in 2019 via a deputy governor – lodged about 150 Rohingya refugees in a "holding center” that was set up in a jail in the Kathua district.

A police official had told AA that the process of identifying the illegal immigrants had been taken up after obtaining approval from India's Home Affairs Ministry.

"All details of nationality, the time since they have been settled here and total family members are being collected to carry out the verification process. After due process, the immigrants who were not holding valid documents have been sent to a holding center and will be ultimately deported back," the official said.

Mohammad Haneef, a Rohingya community leader, says they are distressed over the developments. According to him, there are over 6,000 refugees living in 39 camps in the Jammu region, where right-wing groups have been demanding their eviction and deportation.