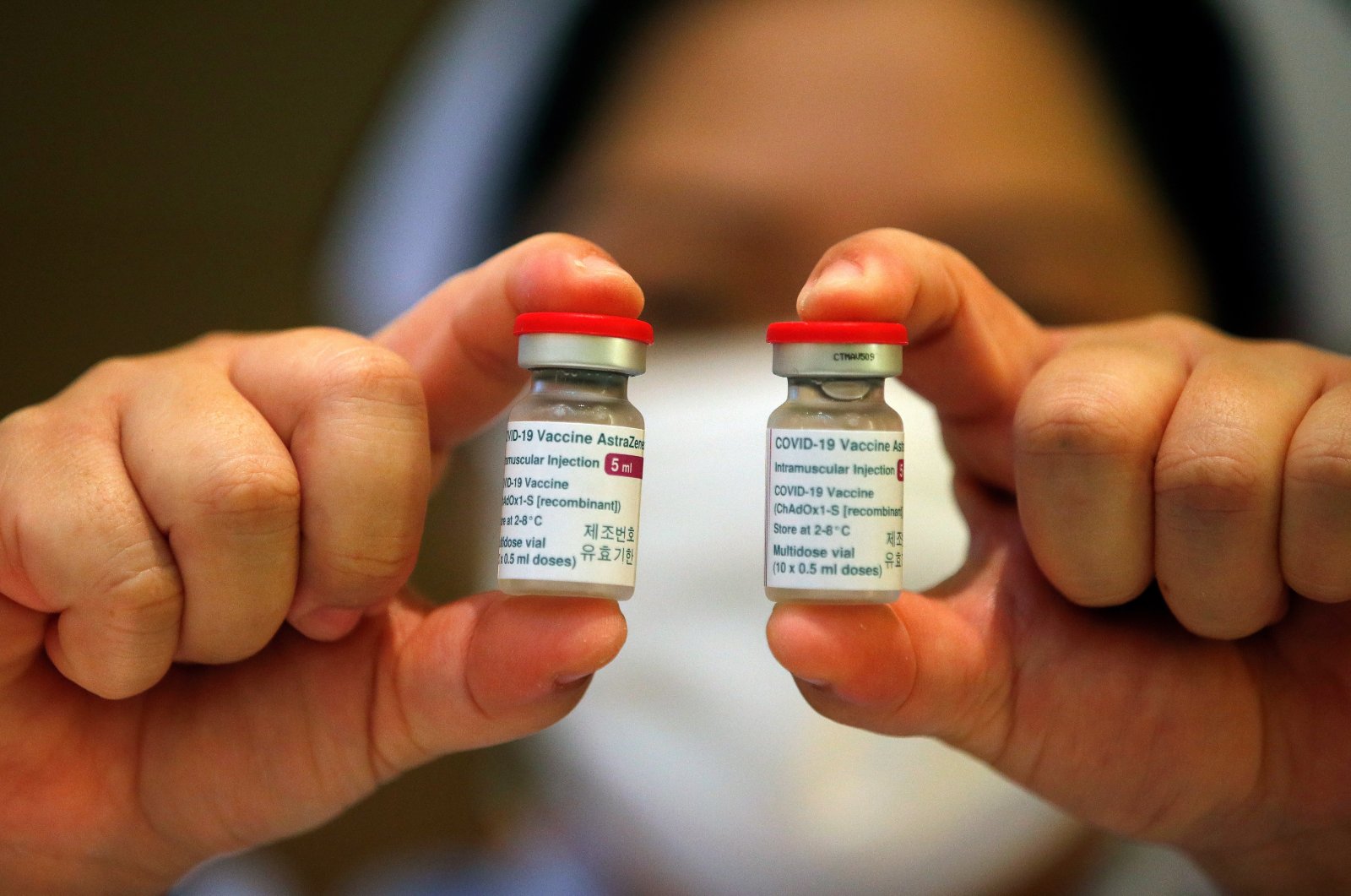 A Thai nurse displays vials of vaccine against COVID-19 developed by AstraZeneca after the cancelation and postponement of the vaccination event for the prime minister and cabinet ministers due to reports of side effects, at Bamrasnaradura Infectious Diseases Institute in Nonthaburi province, Thailand, March 12, 2021. (EPA Photo)
by REUTERS Mar 12, 2021 2:42 pm
RECOMMENDED

Thailand's Prime Minister Prayuth Chan-ocha and members of his cabinet canceled plans to receive the AstraZeneca vaccination on Friday, after the country delayed the use of the vaccine over reports of blood clots in some European nations, a health official said.

In a health ministry news conference, Prasit Watanapa, Dean of the Faculty of Medicine at Siriraj Hospital, confirmed the rollout would be delayed after a suspension of inoculations using the vaccine in Denmark, Norway and Iceland.

Thailand is in a position to suspend the rollout for safety investigations because it has brought a second wave of coronavirus cases under control, said Kiattiphum Wongjit, permanent secretary for the Public Health Ministry.

"AstraZeneca is still a good vaccine but with what has happened ... the health ministry based on this advice would like to postpone the usage of the AstraZeneca vaccine momentarily," Kiattiphum said.

Yong Poonvorawan, a virology expert, told the news conference that the investigation would also check on whether any issues might be related to particular batches in Europe and said the vaccines supplied to Thailand were made in Asia.

Thailand has so far recorded just over 26,500 coronavirus infections and 85 fatalities in a population of 66.5 million. A second wave that began in December is now registering below 100 new infections per day.

Thailand's overall vaccination strategy is heavily reliant on AstraZeneca, which will be produced locally by a company owned by the country's king, with 61 million doses reserved for the Thai population.

However, the locally made AstraZeneca is not due to be ready until at least June, and Thailand last week began limited inoculations with imported doses of the Sinovac vaccine.

Thailand has so far administered about 40,000 of the 200,000 recently received doses of Sinovac’s CoronaVac, Kiattiphum said.

The country also last week received 117,300 doses of the AstraZeneca vaccine, which the prime minister and his cabinet had been scheduled to receive on Friday.

Kiattiphum said that Thailand's imported doses were not from the same batch that is being investigated in Europe.

A number of European countries have also suspended AstraZeneca vaccinations, following Denmark, Norway and Italy temporarily suspending the use of the company's COVID-19 vaccine after reports of blood clots in some people.