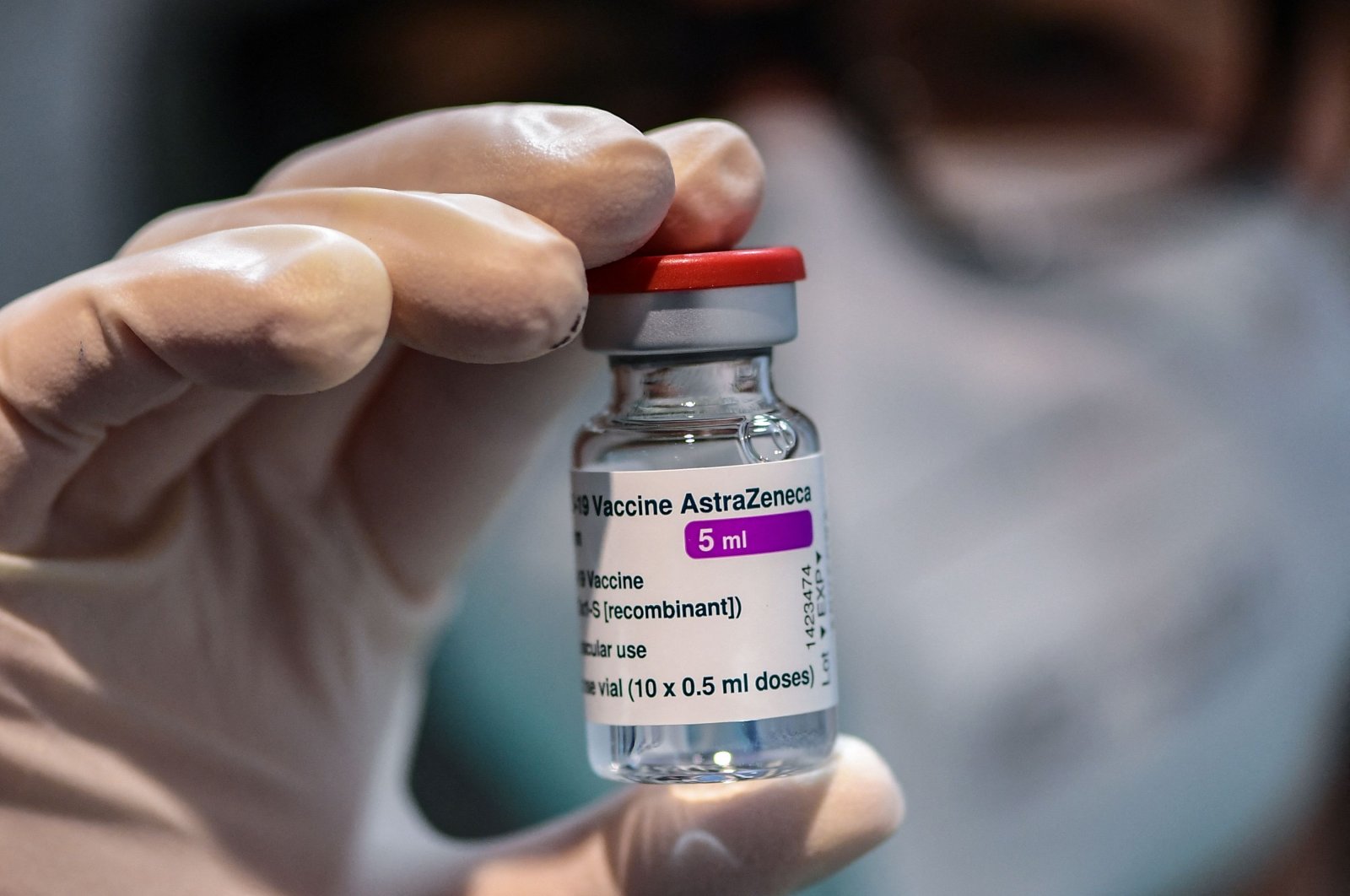 A medical worker holds a vial of the AstraZeneca/Oxford COVID-19 vaccine during a vaccination campaign at the National Museum of Science and Technology Leonardo Da Vinci, Milan, Italy, March 9, 2021. (AFP Photo)
by Agencies
Mar 11, 2021 6:40 pm

Denmark has temporarily suspended use of the AstraZeneca's COVID-19 vaccine after reports of blood clots in some people, but its health authority said Thursday it has no evidence the vaccine was responsible.

Other experts pointed out that of the millions of AstraZeneca vaccine shots administered elsewhere, including in Britain, there have been no reported cases of the vaccine causing blood clots or related problems.

Denmark's Health Authority said its decision was "based on a precautionary principle” and that one person who developed a blood clot after vaccination had died.

"At present, it cannot be concluded whether there is a link between the vaccine and the blood clots,” authorities said. Danish officials did not say if the patient had any underlying conditions and did not provide any other details, including age or gender.

Some doctors pointed out that people now being immunized against COVID-19 are more likely to already have health problems and that it would be difficult to determine whether a vaccine shot is responsible.

"The vast majority of people being vaccinated at the moment are elderly or have got underlying diseases,” Dr. Paul Hunter, a professor of medicine at the University of East Anglia, told The Associated Press (AP). "They will be at increased risk for all sorts of adverse outcomes, regardless of whether or not they have been vaccinated.”

Hunter said there were 11 reports of blood clots in Britain, and none have been shown to have been caused by the AstraZeneca vaccine. He said pausing immunizations was also a risky decision in itself.

"When you stop vaccinating, you know that some people will die of COVID-19,” he said. Denmark's suspension of the AstraZeneca vaccine will last for at least two weeks, the agency said, adding it hinged on an evaluation by the EU medical regulator.

"Like others, I find (the pausing) and its consequences annoying. It’s too early to conclude in this case and when there is a risk, it must be investigated,” Danish Prime Minister Mette Frederiksen said.

After the Danish announcement, Norway decided to follow suit and temporarily suspend the Anglo-Swedish company' s vaccine, which was developed by the University of Oxford, also saying that there are no proven links.

In addition, Italian Medicines Agency (AIFA) said Thursday it was banning a batch of the AstraZeneca's coronavirus vaccine after what it said were "serious adverse events,” reported Agence France-Presse (AFP).

"Following the reporting of some serious adverse events... AIFA has decided, as a precaution, to issue a ban on the use of this batch throughout the national territory," AIFA said in a statement.

It said that it "reserves the right to take further measures, if necessary," in coordination with the European Medicines Agency (EMA).

However, it stressed that at the moment there had been no established link between the administration of the vaccine and the alleged side-effects.

In an interview with the broadcaster La Sexta, Spanish Health Minister Carolina Darias said there had been no similar incidents in Spain and said only minor side effects had been reported from the AstraZeneca vaccine.

Dr. Bharat Pankhania, an infectious diseases expert at Britain's University of Exeter, called Denmark's decision to pause its use of AstraZeneca shots "a dramatic step.”

"The vaccine has been given to several million people all over the world and we have not had similar reports of vaccine-induced clotting,” he said, adding that the blood clots were more likely to be "separate, unconnected events.”

Britain's medicines regulator, MHRA, reacted by noting there was no confirmation that the reported blood clot was caused by the AstraZeneca vaccine. "People should still go and get their COVID-19 vaccine when asked to do so,” it said.

However, Hendrik Streeck, a German virologist at the University of Bonn, said the Danish decision was the right one, reported AP. "It’s not clear what the cause was, that’s why the vaccinations are being stopped for now,” Streeck told German broadcaster n-tv.

"In very rare cases, there can be a problem with a specific batch. Now they are looking to see what caused the clot... We don’t want to put anybody at risk, but I’m not concerned,” he said. "The exact right thing is being done in Denmark.”

The European Medicines Agency has begun investigating the cases in Denmark but so far there's no information that there are more blood clots in people who have received a vaccine.

On Wednesday, the EMA said Austria had suspended the use of a batch of COVID-19 vaccine made by AstraZeneca after a person had been diagnosed with multiple blood clots died 10 days after vaccination, and another was hospitalized with blockage in arteries in the lungs after being vaccinated. The latter is now recovering.

Two other reports of similar problems had been received for this batch as of March 9, the EMA said, though there is no indication that the problems were caused by the vaccine.

The EMA said the 1 million-dose batch in question was delivered to 17 EU countries.

Germany’s Paul Ehrlich Institute, which oversees vaccine matters, said it was in contact with Danish authorities and the EMA on the issue but that no doses from the batch used in Austria were on the German market.