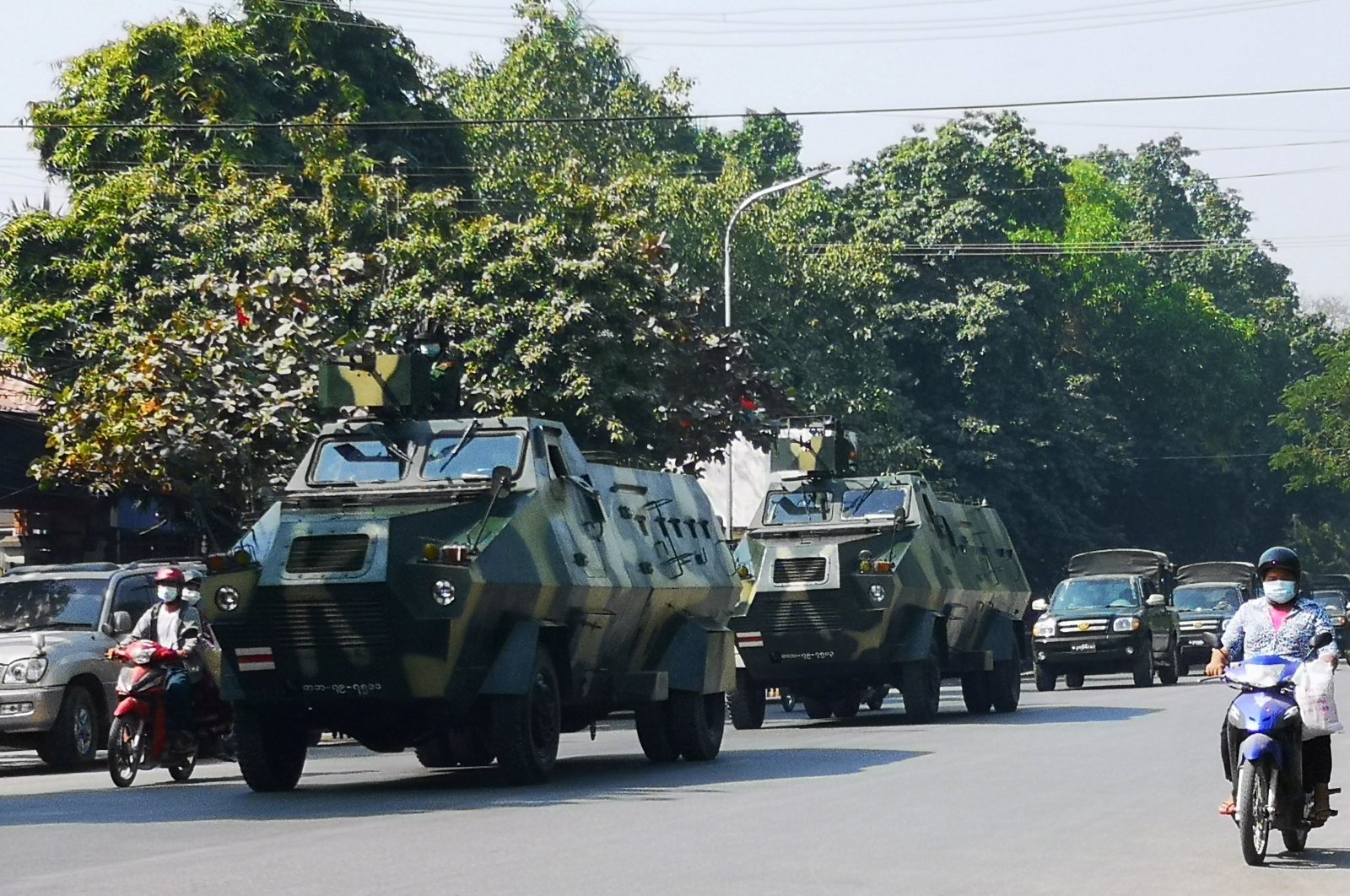 Myanmar Army armored vehicles drive past a street after they seized power in a coup in Mandalay, Myanmar February 2, 2021. (Reuters Photo)
by REUTERS May 23, 2021 2:15 pm
RECOMMENDED

The fighting at Muse, one of the main crossing points to China, was the latest to hit Myanmar since the coup led to an upsurge of conflict with insurgent groups in border regions, as well as bombings, shootings and arson across the country.

Gunfire broke out in Muse around dawn, broadcaster DVB and Khit Thit Media said. Khit Thit Media published pictures of what it said were civilian vehicles that were peppered with bullet holes. There were no immediate reports of casualties.

Reuters was unable to reach a junta spokesperson or spokespeople for the four ethnic armed groups that make up the Northern Alliance. One of the groups in the alliance, the Kachin Independence Army, attacked a military post in northwestern Myanmar, nearly 320 kilometers (200 miles) from Muse and closer to the Indian border on the other side of the country, on Saturday. The junta is fighting a growing number of conflicts since it seized power on Feb. 1 and overthrew elected leader Aung San Suu Kyi.

Ethnic armed groups that have waged war for decades to demand greater autonomy have been joined by new groups opposed to the coup. Meanwhile, protests are carried out daily against military rule, while strikes have paralyzed hospitals, schools and much private business.

More than 125,000 school teachers – nearly a third of the total – have been suspended for joining a civil disobedience movement to oppose the coup, an official of the Myanmar Teachers' Federation said. At least 815 people have been killed by security forces since the coup, according to the Assistance Association for Political Prisoners (AAPP) activist group.

The junta disputes that figure and its leader, Min Aung Hlaing, said in comments broadcast on Saturday that 300 people had been killed in addition to 47 police. Protesters also demand the release of nearly 4,300 people who have been arrested since the coup, including Suu Kyi, 75. Min Aung Hlaing said Suu Kyi was healthy and would soon appear in court.

Her next hearing is on Monday on some of the many charges brought against her, which range from illegal possession of walkie-talkie radios to breaching a state secrets law. The army seized power on the grounds of alleged fraud in the general election won by Suu Kyi's party in November.

Its accusations had been dismissed by the former electoral commission, dozens of whose officials are now locked up.