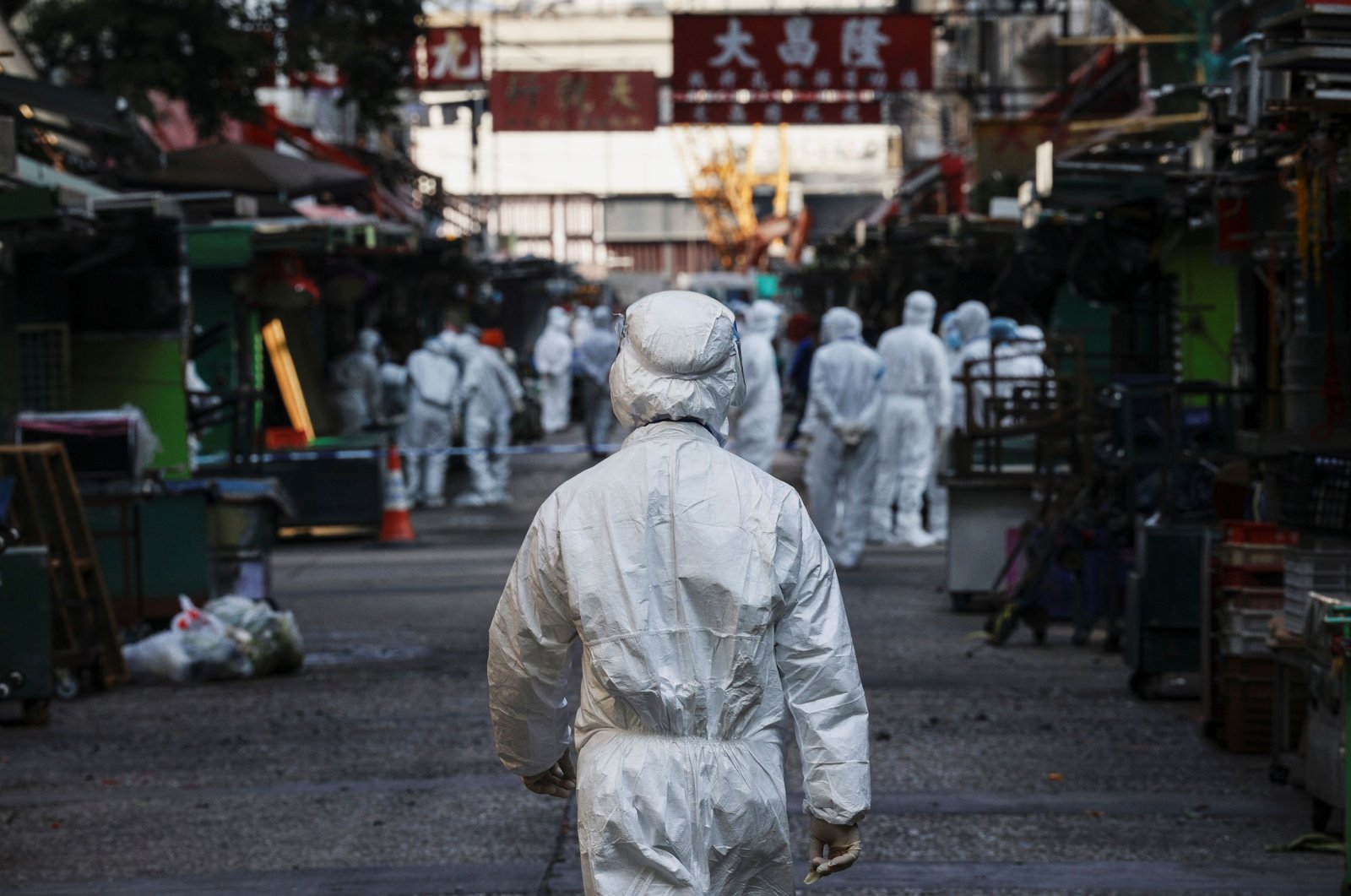 Health workers wear protective gear inside a locked down portion of the Jordan residential area to contain a new outbreak of COVID-19, in Hong Kong, China on Jan. 23, 2021. (Reuters Photo)
by German Press Agency - DPA Jan 23, 2021 9:44 am
RECOMMENDED

Hong Kong's government declared its first lockdown Saturday in a bid to contain an ongoing outbreak of the novel coronavirus in one of the city's poorest and most densely populated districts.

The lockdown, which affects around 10,000 residents across 150 residential blocks in the Jordan neighborhood in Kowloon, was announced with immediate effect at 4:45 a.m. (20:45 GMT Friday).

The announcement came after a full day of speculation after some details were leaked to the press, which officials did not comment on, leading to confusion and panic-buying in the area, local media reported.

According to government statements, the "restricted area" will remain sealed off for 48 hours to allow for mandatory nucleic acid testing for the virus of all residents, which is expected to be completed by midnight Saturday.

Residents will be barred from leaving the area until around 6 a.m. Monday, but will be free to move around within it. Only essential workers such as carers for the elderly and Hospital Authority staff will be allowed to enter the restricted zone.

After sample collection, residents are required to stay at home until all their test results are ascertained, the government said in a statement issued early Saturday morning.

Although Saturday is a working day in Hong Kong, the government has promised no support for those unable to go to work, saying they "hope employers can exercise discretion and not deduct the salary of benefits from employees."

Thousands of police, fire services, and immigration officials were deployed to enforce the unprecedented lockdown, according to Secretary for Home Affairs Caspar Tsui.

On Friday, the city reported 55 new locally transmitted cases of COVID-19, of which 24 came from Yau Tsim Mong. Between Jan. 1 to Jan. 20, a total of 162 confirmed COVID-19 cases, involving 56 buildings, were reported from the district.

The area is home to a high number of elderly and poor residents in small, subdivided units, as well as many people from ethnic minorities who have been unduly blamed for the outbreak.

Official statements from the government singling out ethnic minority residents, as well as local media reports accusing them of flouting restrictions, have been blamed for inflaming discrimination.

The city's fourth wave of infections, which began in December, is believed by experts to have originated from a cluster that began in private dance studios and social gatherings among wealthier members of society.

Government adviser Yuen Kwok-yung has said rich residents made up a larger portion in the fourth wave than in previous ones, some of whom, including well-known members of local high society, refused to reveal their whereabouts and aid in contact tracing.

Only four of the over 700 confirmed local cases logged in January have involved members of ethnic minority groups.