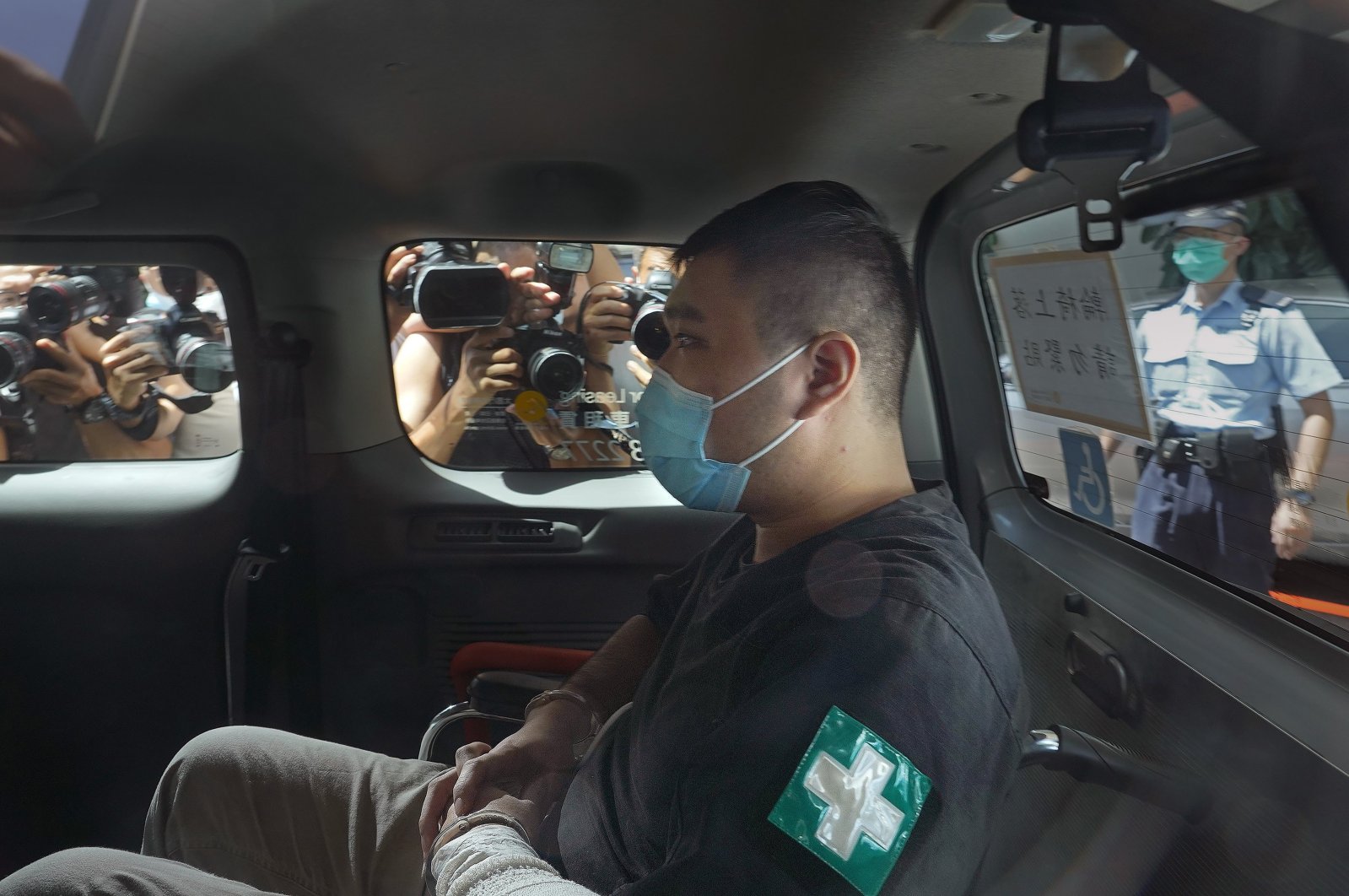 Tong Ying-kit, 23 years old, arrives at a court for the violation of the new security law after carrying a flag reading "Liberate Hong Kong, Revolution of our times" during a protest in Hong Kong, China, July 6, 2020. (AP Photo)
by REUTERS
Jul 30, 2021 11:38 am

The first person convicted under Hong Kong's national security law was jailed for nine years on Friday for terrorist activities and inciting secession, judges said, in a ruling with long-term implications for the city's judicial landscape.

Former waiter Tong Ying-kit, 24, was accused of driving his motorcycle into three riot police last year while carrying a flag with the protest slogan "Liberate Hong Kong. Revolution of our times."

Tong's lawyer, Clive Grossman, told reporters outside the court the defense would appeal both the verdict and the sentence. He made no further comment.

Judges Esther Toh, Anthea Pang and Wilson Chan – picked by city leader Carrie Lam to hear national security cases – ruled on Tuesday that the slogan was "capable of inciting others to commit secession."

On Friday, the judges sentenced Tong to 6.5 years for inciting secession and 8 years for terrorist activities. Of these, 2.5 years will run consecutively, resulting in a total term of 9 years.

"We consider that this overall term should sufficiently reflect the defendant's culpability in the two offenses and the abhorrence of society, at the same time, achieving the deterrent effect required," they said in a written judgment.

Human rights groups have criticized Tong's conviction, saying it imposes new limits on free speech, as well as the precedents set by the trial, which they say contrast with Hong Kong's common law traditions.

"The sentencing of Tong Ying-kit to nine years confirms fears that the national security law is not merely a tool to instill terror into government critics in Hong Kong; it is a weapon that will be used to incarcerate them,” Amnesty International’s Asia-Pacific Regional Director Yamini Mishra said in a statement.

The Hong Kong government did not immediately respond to a request for comment.

Security was tight outside the court, with dozens of police stopping and searching people in the vicinity.

Tong was denied bail in line with a provision of the national security law that puts the onus on the defendant to prove they would not be a security threat if released. Tong also did not get a trial by jury because of "a perceived risk of the personal safety of jurors and their family members or that due administration of justice might be impaired."

Hong Kong and Chinese authorities have repeatedly said that all the rights and freedoms promised to the former British colony upon its return to Chinese rule in 1997 were intact, but that national security was a red line. All cases have been handled in accordance with the law, both governments have said.

At a pre-sentencing hearing on Thursday, Grossman pleaded for lenience, saying any incitement was of a minor nature and Tong was a decent young man who did something stupid.

Tong, who pleaded not guilty to all charges, was also found guilty of terrorist activities, with judges saying on Tuesday his motorcycle was potentially a lethal weapon and his actions "a deliberate challenge mounted against the police."

In their reasons for sentencing, the judges wrote: "whoever carries out terrorist activities with a view to intimidating the public in order to pursue political agenda, whatever that is, should be condemned and punished.

"But when the political agenda is secessionist in nature, it is our view that there is an added criminality in that such an agenda is seeking to undermine national unification."

A charge of dangerous driving causing grievous bodily harm was not considered.

Tong's trial focused mostly on the meaning of the slogan, which was ubiquitous during Hong Kong's 2019 pro-democracy protests.

The arguments over its interpretation drew on topics such as ancient Chinese history, the U.S. civil rights movement and Malcolm X.

The judges said on Tuesday they were "sure that the defendant fully understood the slogan to bear the meaning of Hong Kong independence." Tong did not testify during the trial.