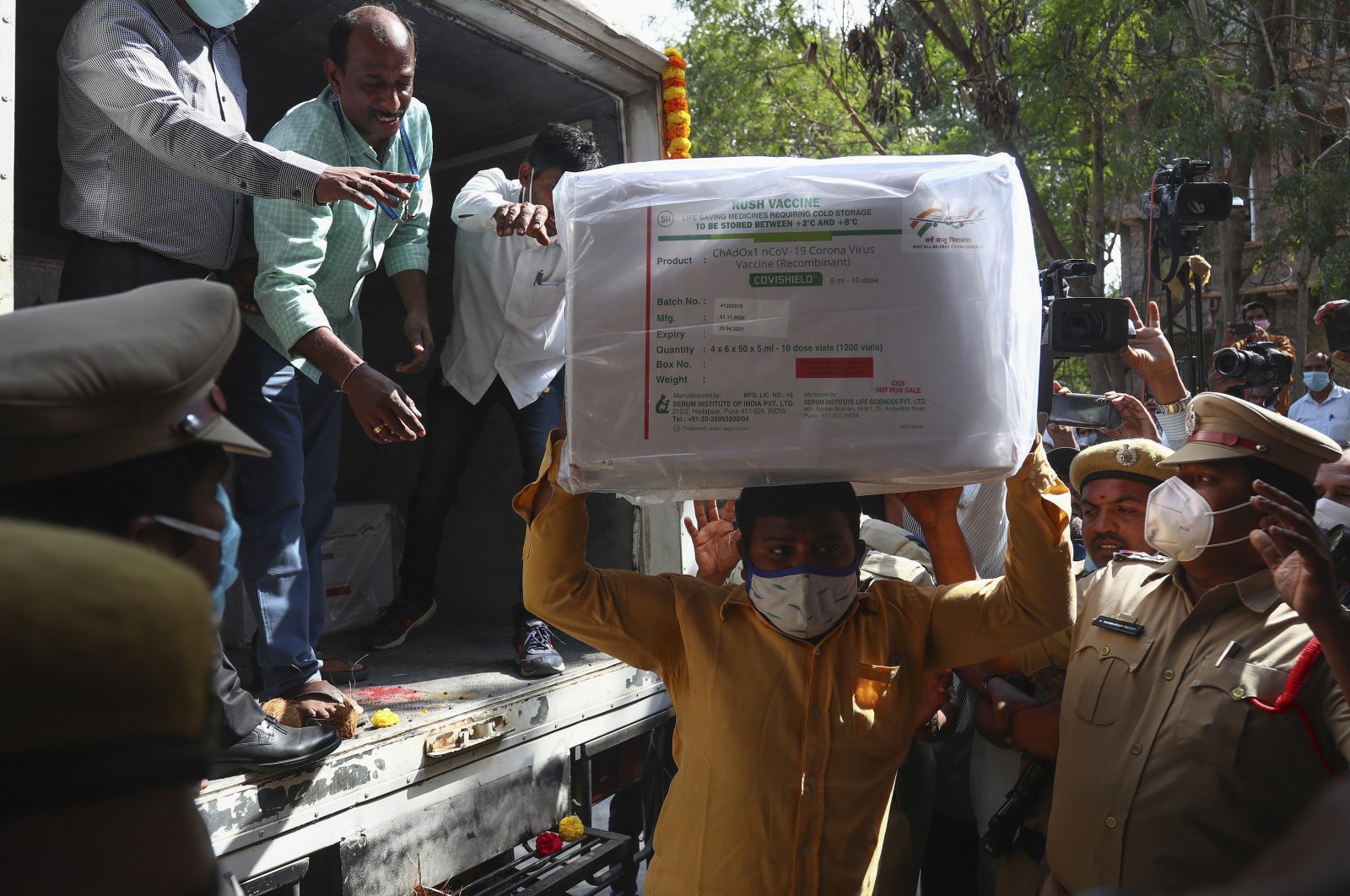 Health workers shift a box containing COVID-19 vaccines from a vehicle to a cold storage at Commissionerate of Health and Family Welfare in Hyderabad, India, Jan. 12, 2021. (AP Photo)
by Agencies Jan 12, 2021 12:57 pm
RECOMMENDED

Indian airlines started delivering batches of COVID-19 vaccines across the country on Tuesday, getting ready for the launch of a campaign to offer shots to 1.3 billion people in what officials call the world's biggest vaccination drive.

The first consignment of vaccines developed by the Serum Institute of India left the Indian city of Pune on Tuesday. The vaccines rolled out from Serum Institute of India's facility in temperature-controlled trucks to the city’s airport from where they were loaded into private air carriers for distribution all over the country. Aviation minister Hardeep Singh Puri called the shipping of vaccines a "momentous mission.”

Beginning Saturday, India will start the massive undertaking of inoculating an estimated 30 million doctors, nurses and other front-line workers. The effort will then turn to inoculating around 270 million people who are either older than 50 or have secondary health conditions that raise their risks of dying from COVID-19, as The Associated Press (AP) reported.

"These vaccines will be taken to the cold storage from the airport and swiftly delivered to vaccination booths," said Nitin Patel, Gujarat's deputy chief minister, according to release in quotes carried by Reuters.

The first vaccine shipments contain the COVISHIELD vaccine made by the Serum Institute and developed by Oxford University and AstraZeneca. India's drug regulator has also approved for emergency use a homegrown vaccine, Bharat Biotech’s COVAXIN.

Medical groups and others have raised concerns about the drug being approved with scant evidence of its effectiveness. It’s still unclear when and where COVAXIN will be distributed.

Health authorities in eastern and western states said they would use the experience from regular child immunization programs for polio to ensure everyone gets covered in what they called the world's biggest vaccination drive. But shoddy transport networks and a crumbling health care system add an enormous layer of complexity, they said.

India has the second-most COVID-19 infections in the world, after the U.S. Since the pandemic began, it has confirmed more than 10.4 million cases and over 150,000 deaths. On Tuesday, the number of infections in India climbed by 12,584, the lowest daily increase in several months.