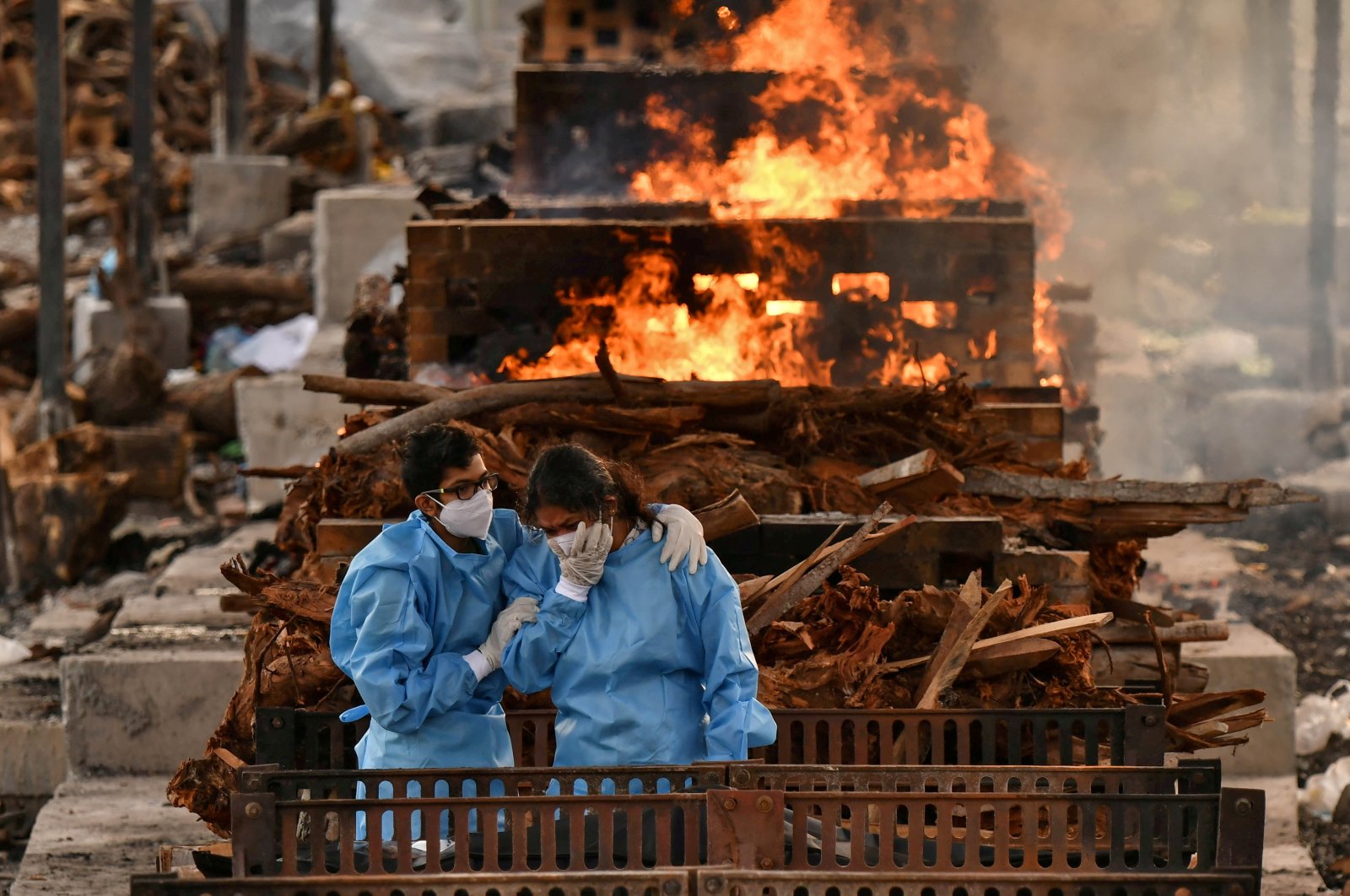 Family members of Vijay Raju, who died as a result of COVID-19, mourn before his cremation at a crematorium ground in Giddenahalli village on the outskirts of Bengaluru, India, May 13, 2021. (Reuters Photo)
by Agencies
Jul 02, 2021 11:03 am

The official death toll from the coronavirus in India reached the 400,000 mark, though experts say the actual number of deaths could be a million or more, with a third wave likely approaching

India on Thursday crossed the grim milestone of more than 400,000 people lost to the coronavirus, a number that though massive is still thought to be a vast undercount because of a lack of testing and reporting.

More than half of India's reported coronavirus deaths – the third highest in the world – have occurred over the past two months as the delta variant of the virus tore through the country and overwhelmed the already strained health system.

New cases are on the decline after exceeding 400,000 a day in May, but authorities are preparing for another possible wave and are trying to ramp up vaccination. The Health Ministry said that 853 people died in the past 24 hours, raising total fatalities to 400,312. It also reported 46,617 new cases, taking the country's pandemic total past 30.4 million. India, a country of nearly 1.4 billion people, is the third to cross 400,000 deaths, after the United States and Brazil. Experts believe India's reported deaths and infections are massive undercounts.

They say an untold number of people died during the April and May surge outside of hospitals, before they could even be tested for the virus. A model from the University of Washington’s Institute for Health Metrics and Evaluation estimates there have been more than 1.1 million COVID-19 deaths in India.

India’s federal ministers from the ruling Bharatiya Janata Party (BJP) have dismissed reports of undercounting as exaggerated and misleading. Even as cases are on the decline, experts worry India could be at risk of another surge of the virus because less than 5% of the population has been fully vaccinated. Health Minister Harsh Vardhan said Wednesday that vaccination speed has picked up after a new policy announced last month ended a complex system of buying and distributing vaccines that overburdened states and led to inequities in how the shots were handed out.

Under the new policy, the federal government will buy 75% of all vaccines in use in India and give them to states for free. Private hospitals can buy the remaining 25% at prices that have been capped and can charge for them. Vardhan also said 120 million doses will be made available by the government in July, as The Associated Press (AP) reported.

The country is hopeful that it will achieve a rapid increase in inoculations in the coming months. Last month, the head of India's COVID-19 task force told reporters that about 2 billion doses could be available by December under a road map that depends on India’s two main suppliers – Serum Institute of India and Bharat Biotech – ramping up production and five other potential vaccines being made available in the coming months. But some have raised questions over whether this is a realistic estimate as both of the country's main suppliers have struggled to boost manufacturing.

On Tuesday, it was announced that the Moderna shot will soon be the fourth vaccine to be administered in India after the AstraZeneca shot, Bharat Biotech’s Covaxin and Russia's Sputnik. India’s Zydus Cadilla has also applied to the government drug controller for emergency use authorization of its DNA vaccine. The vaccine can be used for both adults and young people in the 12-18 age group, the company said Wednesday.

Battling one of the worst coronavirus outbreaks in Asia, Indonesia which is the world's fourth most populous country has seen record infection numbers recently, including on Thursday when it recorded 24,836 cases and 504 deaths from respiratory disease. The scenes in Indonesia's hospitals in the past week have been eerily similar to those in India two months ago – hospital corridors jammed with COVID-19 patients and frantic families trying to find oxygen to treat sick loved ones.

Instead of the makeshift funeral pyres in the streets of New Delhi, the capital of predominantly Muslim Indonesia, Jakarta, has seen truckloads of corpses being transported to newly dug gravesites.

Since the peak of its recent crisis, Indonesian President Joko Widodo called Indian leader Narendra Modi for guidance as his nation grappled with a trebling of positive COVID-19 cases in the past three weeks.

"We can learn from there," Jokowi, as the president is widely known, told business leaders Wednesday.

But epidemiologists and health professionals say Indonesia has failed to fully heed the lessons of India. Indonesia announced a two-week lockdown Thursday limited to the islands of Java and Bali covering only 12 of the country's 34 provinces and about 55% of its population.

By contrast, "almost all" states and territories in India introduced stricter movement restrictions during its COVID-19 crisis, according to a World Health Organisation (WHO) analysis. This followed guidance from India's central government that lockdowns should occur where positivity rates – infections per person tested – were 10% or more. All of Indonesia's 34 provinces have positivity rates above 10%. The WHO says a positivity rate above 5% indicates COVID-19 is out of control.

Australia, like several other countries in Asia, has struggled to inoculate people as initial successes in containing the pandemic led to vaccine hesitancy, and manufacturers were slow to ship doses. Australia has fully vaccinated only 6% of its population, while Japan has vaccinated 12%.

Japan reported on Wednesday that the delta variant now accounts for nearly a third of all cases in the eastern part of the country, including Tokyo, and that could grow to 50% by mid July. Tokyo and three neighboring prefectures are among areas under a 'quasi' state of emergency set to run through July 11 and the recent uptick in infections has officials leaning towards keeping restrictions in place, government sources have told Reuters.

On Friday, Tokyo governor Yuriko Koike reiterated that a ban on spectators for the Olympic Games, which start on July 23, would be an option if the coronavirus situation worsened.

In South Korea, officials said on Friday daily coronavirus cases topped 800, the highest in nearly six months, with vaccination below 10%. The average number of new infections in the country has risen for 10 days straight, and authorities in Seoul have delayed relaxing social distancing measures.

"The delta variant is a strain that is most optimized for widespread transmissions," said Chun Eun-mi, a respiratory disease specialist at Ewha Womans University Medical Center in Seoul. "The cases of Indonesia, India and Britain show that not just Korea but many other countries will need to rethink their vaccine strategy and reopening plans," she said.