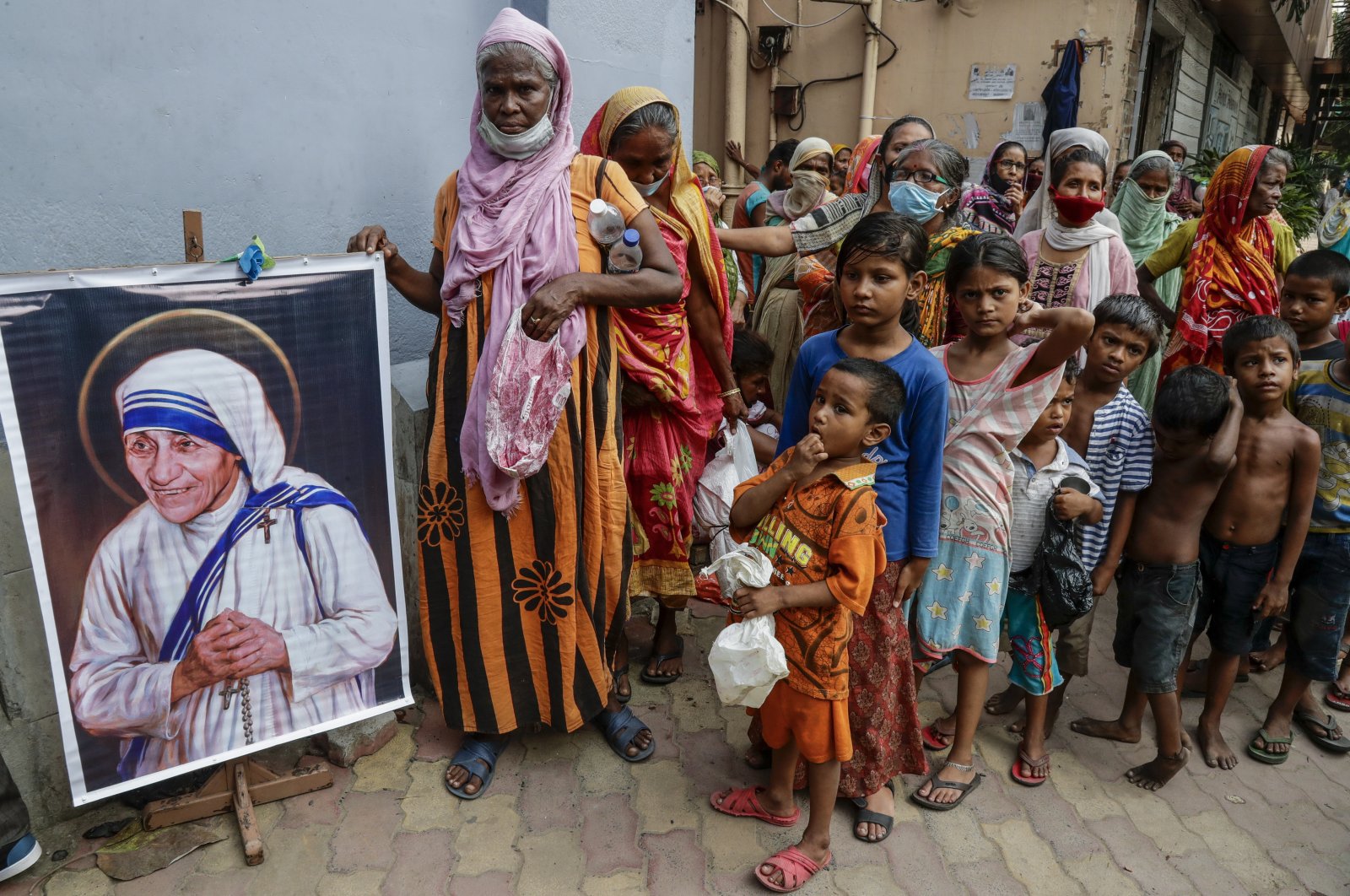 Homeless people gather beside a portrait of St. Teresa, the founder of the Missionaries of Charity, to collect free food outside the order's headquarters in Kolkata, India, Aug. 26, 2021. (AP Photo)
by REUTERS Dec 28, 2021 1:59 pm
RECOMMENDED

Hindu vigilante groups disrupted Christmas mass in parts of India, including in Modi's core territory ahead of local elections in the coming months.

"Shocked to hear that (at) Christmas, Union Ministry froze all bank accounts of Mother Teresa's Missionaries of Charity in India!" Mamata Banerjee, the state's chief minister, wrote in a tweet. "Their 22,000 patients & employees have been left without food & medicines. While the law is paramount, humanitarian efforts must not be compromised," Banerjee, an opposition leader and vocal critic of the Modi government, said.

Nobel-laureate Mother Teresa, a Roman Catholic nun who died in 1997, founded the Missionaries of Charity in 1950.

Head-quartered in the eastern state of West Bengal, the MoC has more than 3,000 nuns worldwide who run hospices, community kitchens, schools, leper colonies and homes for abandoned children.

Officials at MoC were not immediately available for comment, while the federal home ministry said the government will issue a statement once an initial inquiry is completed.

"I urge the press to not mix financial irregularities of a charity group with religious sentiments ... the decision to freeze accounts has nothing to do with Christianity," an official said, requesting anonymity as he is not authorized to speak to the media.

Vicar General Dominic Gomes of the Archdiocese of Kolkata said the freeze of the West Bengal accounts was "a cruel Christmas gift to the poorest of the poor."

Since Modi came to power in 2014, right-wing Hindu groups have consolidated their position across states and launched small-scale attacks on religious minorities, saying their action is to prevent religious conversions.

Christians and other critics say the justification for preventing conversions is false and note Christians represent only 2.3% of India's 1.37 billion people, while Hindus are the overwhelming majority.

The Hindu newspaper on Monday reported disruption of Christmas celebrations at the weekend and last week, including the vandalizing of a life-size statue of Jesus Christ at Ambala in Haryana, a northern state governed by Modi's nationalist Bharatiya Janata Party (BJP).

It also reported activists burnt a model of Santa Claus and chanted slogans against Christmas celebrations and religious conversions on Saturday outside a church in Varanasi, Modi's parliamentary constituency and Hinduism's holiest city.

On Saturday, Christmas celebrations were also disrupted in Silchar, eastern Assam, after men, claiming to be members of Bajrang Dal – a right-wing group with close ties to BJP – forced their way into a church, NDTV, a local news channel, reported.

Contacted by telephone, the federal and state governments declined to comment on the protests.

Several Indian states have passed or are considering anti-conversion laws that challenge freedom of belief and related rights that the Indian Constitution guarantees to minorities.

"The strength of India is in its diversity and the people who have done this at Christmas are the real anti-nationals," Vaz said.