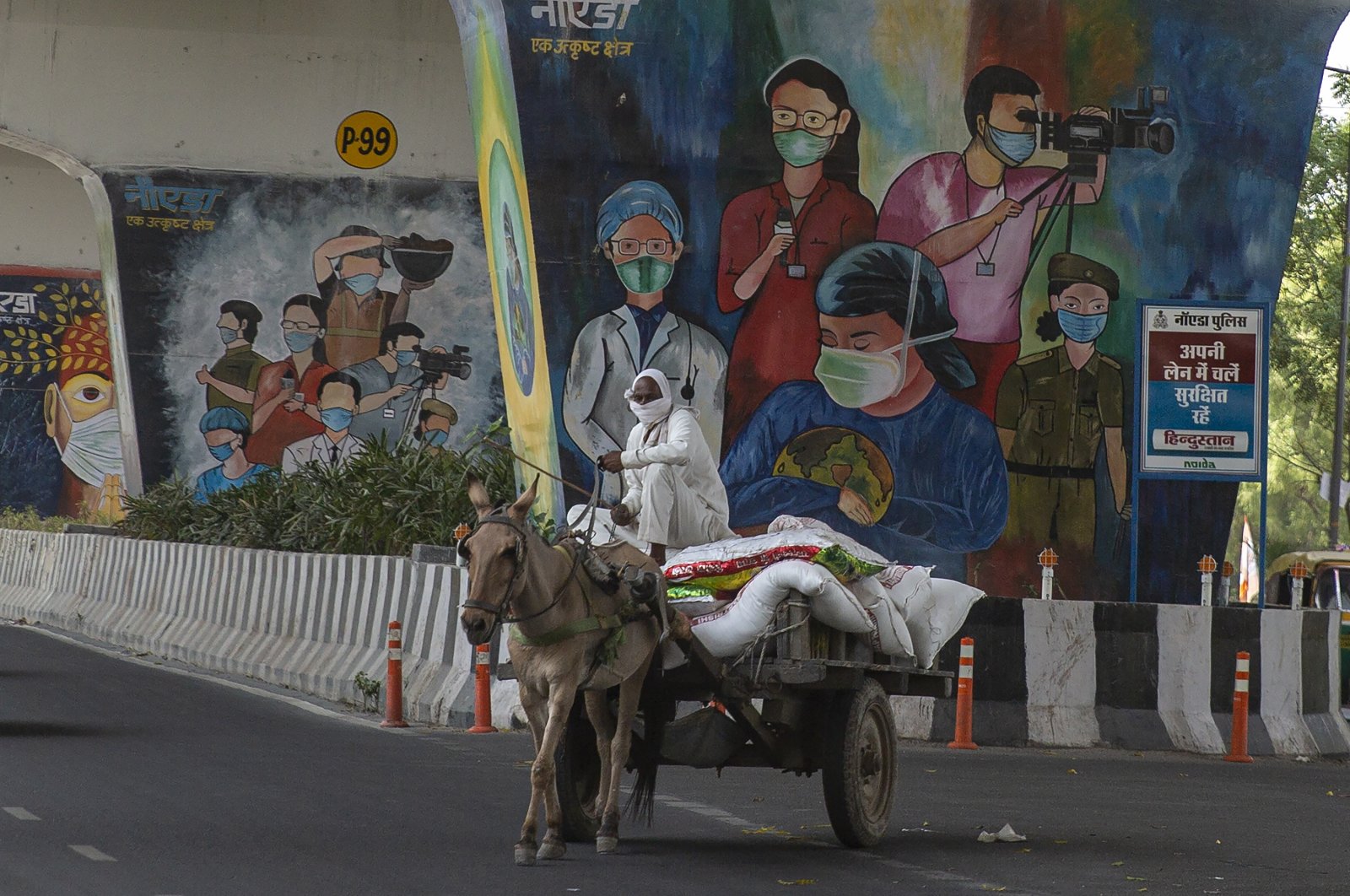 India has registered a record 200,739 COVID-19 cases over the last 24 hours, taking its staggering overall tally to 14 million as the country struggles to cope with the growing number of patients and severe shortages of beds and oxygen

India recorded a worrying number of coronavirus cases, reporting over 200,000 new infections in a single day on Thursday as the country's overall case tally passed the 14 million mark, putting its already fragile health system in even more peril.

In the capital, New Delhi, more than a dozen hotels and wedding banquet halls were ordered to be converted into COVID-19 centers attached to hospitals. "The surge is alarming,” said S.K. Sarin, a government health expert in New Delhi.

Arvind Kejriwal, Delhi's top elected official, announced weekend curfews to break the chain of infections in the capital, which added 17,282 new cases and 104 more deaths in the previous 24 hours.

Trips to railway stations, hospitals and airports will be allowed as essential services, but shopping malls, gymnasiums, spas and auditoriums must close, he said in a statement. He also said 5,000 hospital beds are available and more capacity is being added, so there was no bed shortage in the capital.

"This virus is more infectious and virulent...We have 35-year olds with pneumonia in intensive care, which was not happening last year," said pediatrician Dhiren Gupta, at the Sir Ganga Ram Hospital. "The situation is chaotic."

According to the NDTV news channel, there was a constant stream of hearses arriving at Nigambodh Ghat, one of Delhi's main crematoria, where waiting times for cremation ranged from five to six hours.

Local TV channels also showed angry relatives of a patient who passed away after spending several hours on a stretcher outside the COVID-19 hospital in the state capital of Jharkhand's capital of Ranchi, where all beds were allegedly occupied. A similar scene could be seen in neighboring Bihar’s capital, Patna.

In the northern city of Haridwar, hundreds of thousands of pilgrims had thronged to a Hindu religious festival on the banks of the river Ganges on Wednesday, stoking fears of a new surge.

After a lockdown a year ago caused widespread misery and one of the sharpest downturns of any major economy, the central government is desperate to avoid a hugely unpopular second shutdown. But many states are tightening the screws, in particular Maharashtra and its capital Mumbai, which this week introduced tougher restrictions for its 125 million people.

The bustle of India's biggest city and financial capital, Mumbai, ebbed under lockdown-like restrictions to curb the spread of the virus.

The action imposed by worst-hit Maharashtra state Wednesday night closed most industries, businesses and public places and limits the movement of people for 15 days, but didn’t stop train and air services.

A massive second wave of infections is centered on Maharashtra, which makes up a quarter of the tally, and is spreading wider as doctors and experts blame everything from official complacency to aggressive variants. The government has blamed a widespread failure to adhere to norms on physical distancing and the use of masks.

"The situation is horrible," said Avinash Gawande, an official of a government hospital in the industrial city of Nagpur that was battling a flood of patients, as were hospitals in neighboring Gujarat state and Delhi in the north. "We are a 900-bed hospital, but there are about 60 patients waiting and we don't have space for them."

In recent days, migrant workers hauling backpacks have swarmed overcrowded trains leaving Mumbai, an exodus among panic-stricken day laborers. In addition to the 200,739 new cases of infection, the health ministry also reported 1,038 fatalities from COVID-19 in the past 24 hours, taking deaths to 173,123 since the pandemic started last year. India's total cases are second behind the United States and its deaths are fourth behind the U.S., Brazil and Mexico. The actual numbers may be much higher with limited testing among India's nearly 1.4 billion people.

Shahid Jamil, a virologist, said the recent local and state elections with massive political rallies and a major Hindu festival with hundreds of thousands of devotees bathing in the Ganges river in the northern city of Haridwar were super-spreader events. India is ramping up its vaccination drive.

The health ministry said the total vaccinations crossed 114 million with more than 3 million doses administered on Wednesday. The government has also put the brakes on the Serum Institute – the world's largest maker of vaccines by volume – exporting to other countries.

Poorer countries, as well as some rich nations, have relied heavily on Serum for supplies of the AstraZeneca vaccine, but last month New Delhi told the institute to prioritize domestic needs.

The country also said on Friday its drugs regulator will decide on emergency-use applications for foreign COVID-19 vaccines within three working days from application, as it tries to attract Pfizer, Johnson & Johnson and Moderna to sell their shots. The regulator "will process such applications for Restricted Use in Emergency Situation" and its chief "will consider and take a decision within three working days from date of submission of complete application by the applicant," the health ministry said in a statement.

Hospitals in Maharashtra, Madhya Pradesh, Gujarat and several other states were overwhelmed with patients with several hospitals reporting a shortage of oxygen cylinders. In Gujarat, Prime Minister Narendra Modi’s home state, there was a long line of ambulances where patients were being treated, as there was no space in the hospital that said they were short of oxygen cylinders.

Forty-year-old Prashant Mehra said he had to pay a broker for preferential treatment before he could get his 90-year-old grandfather admitted to an overstretched government hospital.

"He died after six or seven hours," he said. "We already asked for our money back."

"If such conditions persist, the death toll will rise," the head of a medical body in the state's industrial city of Ahmedabad told its chief minister in a letter. Television broadcast images of a long queue of ambulances carrying virus sufferers waiting to be admitted to a city hospital that can accommodate more than 1,000. The Indian government said that for the past two days, the country has been producing oxygen at full capacity every day and has increased production.

"Along with the ramped up production...and the surplus stocks available, the present availability is sufficient," the health ministry said in a statement, according to remarks carried by Agence France-Presse (AFP).

Cremation and burial grounds in the worst-hit area also were finding it difficult to cope with the increasing number of bodies arriving for last rites, Indian media reports said, as The Associated Press (AP) reported.

Imran Sheikh, a resident of the western city of Pune, said hospital authorities asked him to arrange for an oxygen gas cylinder for his relative undergoing COVID-19 treatment. New Delhi and dozens of other cities and towns imposed night curfews as they battled an infection rate that almost doubled within 11 days.

When infections began plummeting in India in September, many concluded the worst had passed. Masks and social distancing were abandoned. When cases began rising again in February, authorities were left scrambling.