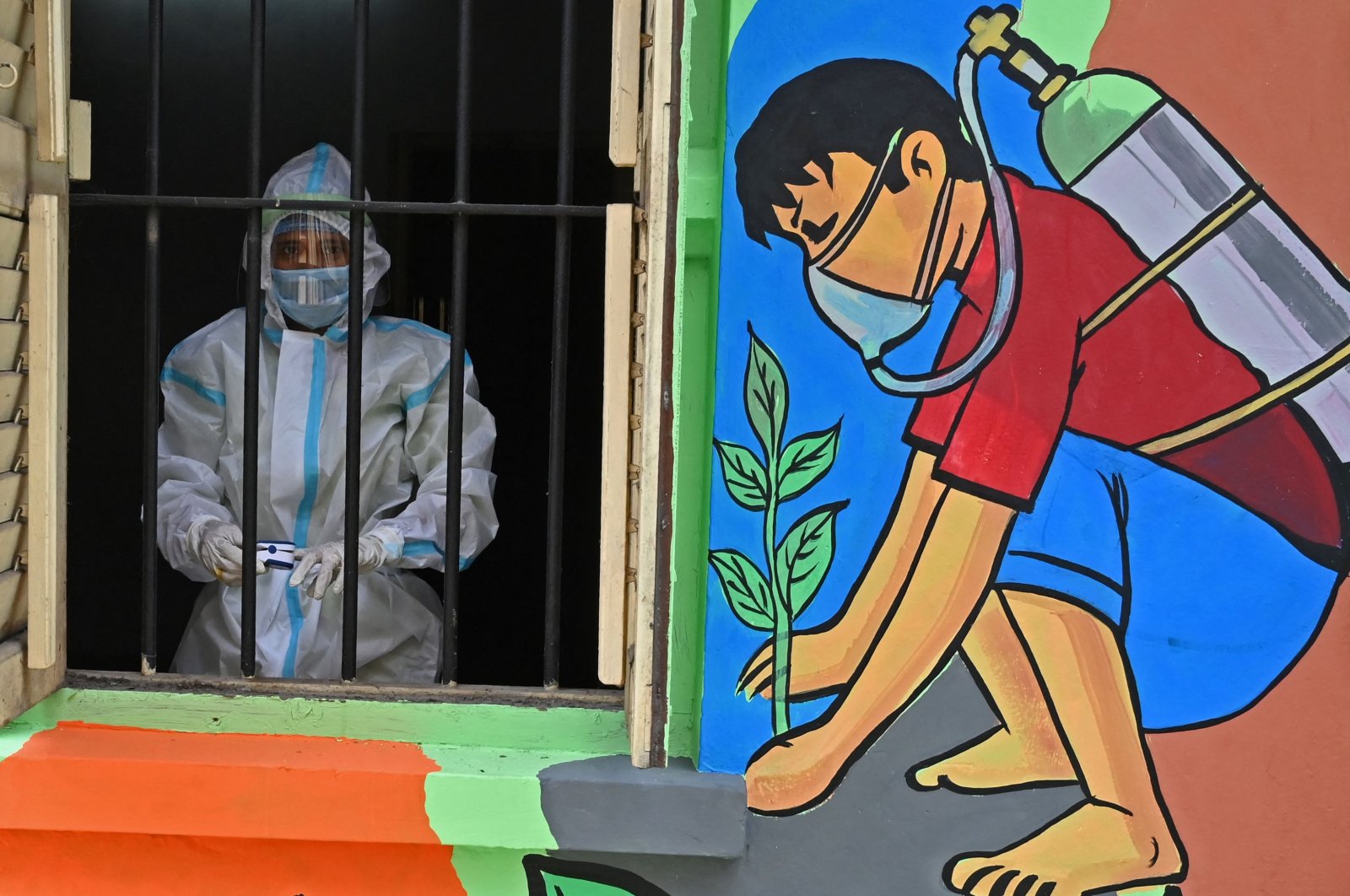 A health worker wearing a protective suit stands in the window of a newly inaugurated "Oxygen Hub" for COVID-19 patients in Kolkata, West Bengal, India, May 23, 2021. (AFP Photo)
by Agencies May 23, 2021 1:57 pm
RECOMMENDED

Doctors in India are fighting a fatal fungal infection affecting COVID-19 patients and those who have recovered from the disease amid a coronavirus surge that has driven the country’s fatalities to nearly 300,000.

The life-threatening condition, known as mucormycosis, is relatively rare but doctors suspect that the sudden increase in the infection could further complicate India’s fight against the pandemic.

India has reported more than 26 million confirmed cases of the coronavirus since the pandemic began, with almost half occurring in the past two months. On Sunday, India's Health Ministry reported 3,741 new deaths, driving the country's confirmed fatalities to 299,266.

It also reported 240,842 new infections, as daily cases remained below 300,000 for a week. The numbers are almost certainly undercounted, with many cases likely being missed due to limited testing.

Experts say new infections in India, which had been rising steeply, may finally be slowing. But there are some early indications that mucormycosis, also known as “black fungus,” is fast becoming a cause of worry.

Mucormycosis is caused by exposure to mucor mold, which is commonly found in soil, air and even in the nose and mucus of humans. It spreads through the respiratory tract and erodes facial structures. Sometimes, doctors have to surgically remove the eye to stop the infection from reaching the brain.

On Saturday, federal minister Sadananda Gowda said nearly 9,000 cases had been reported in India so far, leading to a shortage of Amphotericin B, the drug used to treat the condition. Gowda didn’t share the number of fatalities, but local media have said more than 250 have died because of the disease.

Health officials were working to alleviate the drug shortage, which comes at a time when the country is already short on supplies of oxygen and other health care needs, Gowda said, according to the Associated Press (AP).

Mucormycosis has a high mortality rate and was already present in India before the pandemic. It is not contagious but its frequency in the last month has left doctors shocked.

“It is a new challenge and things are looking bleak,” said Ambrish Mithal, the chairperson and head of the endocrinology and diabetes department at Max Healthcare, a chain of private hospitals in India.

“Earlier I used to come across just a few cases every year but the current infection rate is frightening,” said Mithal.

The latest surge of coronavirus infections in rural India has already taken a toll. Now heath experts are worried that over-the-counter medication, including steroids, can increase the prevalence of mucormycosis.

S.K. Pandey, a medical officer at Ram Manohar Lohia Hospital in Uttar Pradesh state’s Lucknow city, said that unqualified doctors were giving steroids to patients in many rural areas without giving a thought whether they require it or not.

“This has led to increase in black fungus cases in smaller cities where the patient has not even been hospitalized,” he said.

India’s Health Ministry on Thursday asked states to track the spread of the condition and declare it an epidemic, making it mandatory for all medical facilities to report the cases to a federal surveillance network. Prime Minister Narendra Modi on Friday called the disease a “new challenge.”

Meanwhile, India's capital New Delhi will start relaxing its strict coronavirus lockdown next week if new cases continue to drop in the city, its chief minister said on Sunday. New Delhi, one of the worst-hit cities, went into lockdown on April 20, but new cases have declined in recent weeks and the test positivity rate has fallen under 2.5%, compared to 36% last month, Chief Minister Arvind Kejriwal said.

"If cases continue to drop for a week, then from May 31 we will start the process of unlocking," Kejriwal told a news conference.

Many states remain in lockdown, raising worries about the economic impact of the pandemic. The chief of the state-run Indian Council of Medical Research told Reuters this month that districts with a high rate of infection should remain locked down for six to eight weeks to break the chain of transmission.