Indian farmers ramp up protests after 9 killed in clashes 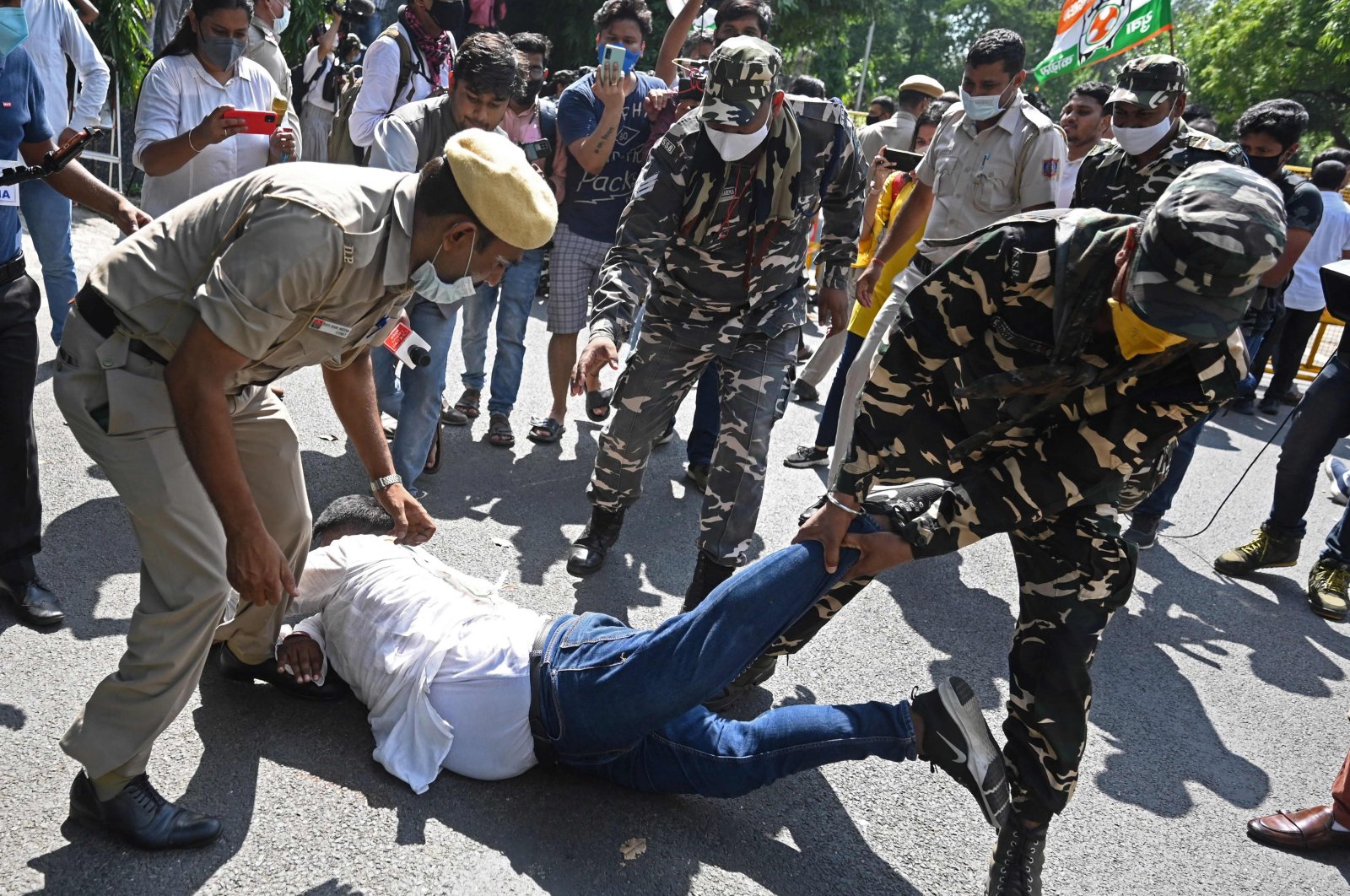 An activist being detained by police during a demonstration a day after clashes involving farmers protesting against agricultural reforms were killed, in New Delhi, India, on Oct. 4, 2021. (AFP Photo)
by ASSOCIATED PRESS
Oct 04, 2021 1:38 pm

Indian authorities suspended internet services and barred political leaders from entering a northern town Monday to calm tensions after nine people were killed in a deadly escalation of a yearlong demonstration against contentious agriculture laws.

Four farmers died Sunday when a car owned by Junior Home Minister Ajay Mishra ran over protesting farmers in the Uttar Pradesh town of Lakhimpur Kheri, officials and farm leaders said. Mishra said his driver and three members of the ruling Bharatiya Janata Party (BJP) who were in the car were all killed by the protesters in the violence that broke out after the incident.

"They were beaten to death by the farmers,” Mishra said in a statement.

Farm leaders alleged that Mishra’s son was in the car when it ran over the protesters, but Mishra denied it. Police on Monday said they had so far arrested six people and filed a criminal complaint against 14 more, including the minister’s son, in connection with the deaths of the four farmers.

The BJP also lodged a criminal complaint against the farmers over the deaths of its members and the car driver, said Arvind Chaurasia, a senior official in charge of the district. Police also said they recovered the body of a local journalist from the spot where violence ensued Sunday but did not provide further details on how he was killed.

The violence marked an escalation in ongoing protests against agriculture laws that farmers say will shatter their livelihoods.

The protests have lasted since the government passed the laws last September and have been one of the biggest challenges to Prime Minister Narendra Modi. Last week, thousands of farmers gathered at the edges of the capital New Delhi to mark one year of demonstrations.

The government says the changes in the laws were needed to modernize agriculture and boost production through private investment. But the farmers say the laws will devastate their earnings by ending guaranteed pricing and will force them to sell their crops to corporations at cheaper prices.

Police officer Arun Kumar Singh told The Associated Press (AP) that all schools have been shut in the district and people have been advised to stay indoors following the violence in Lakhimpur Kheri, 200 kilometers (124 miles) southeast of Uttar Pradesh's capital, Lucknow.

Authorities also barred leaders from various opposition parties from entering the district to meet the farmers amid concerns it could cause further disorder. Senior police official Prashant Kumar said the administration would provide monetary compensation to the families of the deceased farmers and also set up a judicial inquiry to probe the violence.

Farm leaders, however, demand action against the minister and his son, saying Mishra should be removed from office. The deaths have led to more anger among farmers who rallied in multiple states, strengthening their protests.

Opposition Congress Party also held a protest in New Delhi, where several party members scuffled with police and were later detained. The protests are shaping up as challenge to Modi's BJP during its reelection bid early next year in Uttar Pradesh, which is considered India's political bellwether state.

The rallies have been largely peaceful, though clashes in January left one protester dead and hundreds injured after demonstrators broke through police barricades to storm a historic fort in Delhi.

Thousands of farmers have camped for nearly a year on the outskirts of New Delhi, and more than a dozen rounds of talks between the government and the farmers have failed to resolve the issues.