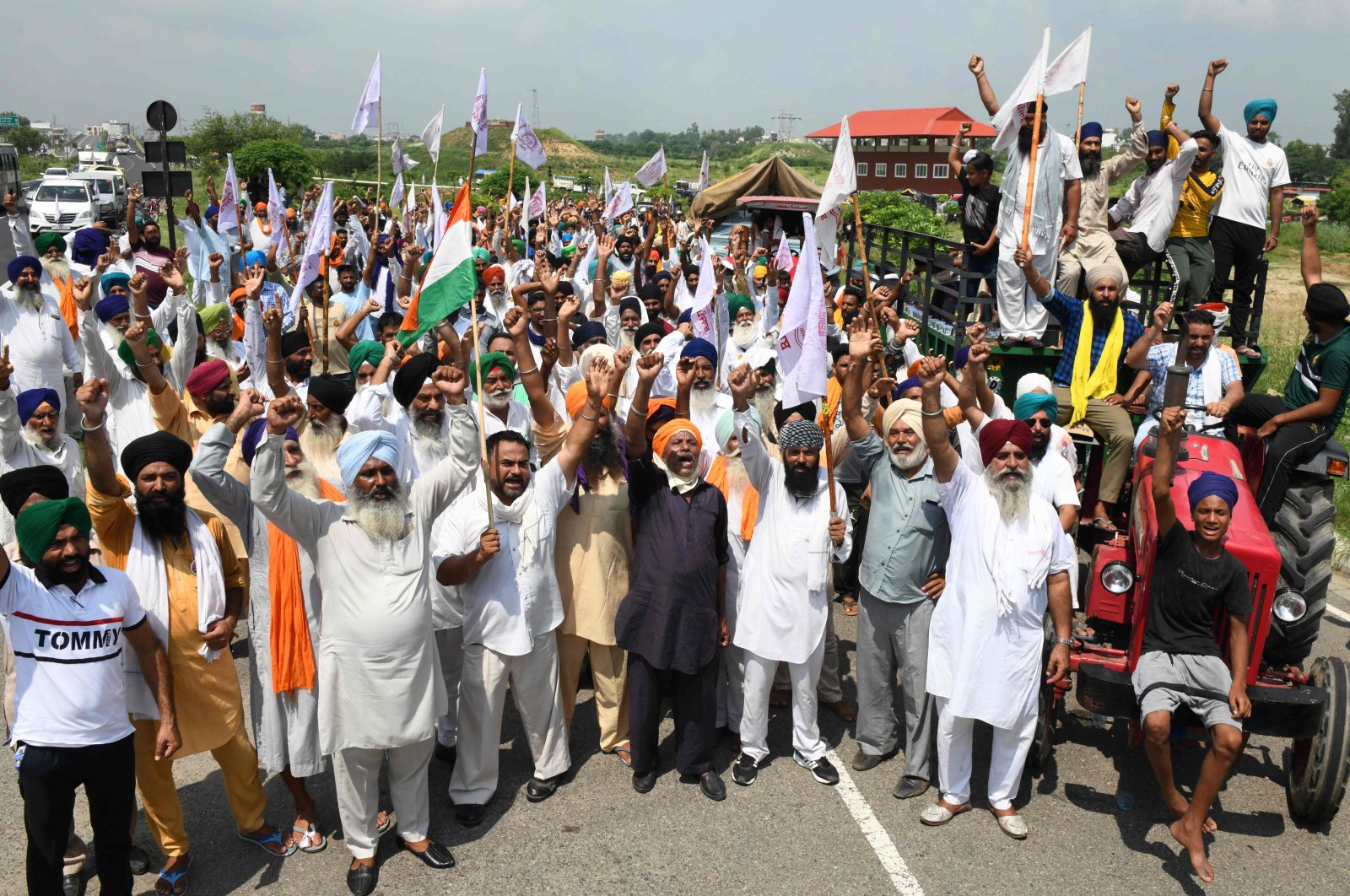 Farmers shout slogans as they make their way to Delhi to join farmers who are continuing their protest against the central government's agricultural reforms, in Beas town of India's Punjab state on Sept. 5, 2021. (AFP Photo)
by German Press Agency - DPA Sep 05, 2021 2:38 pm
RECOMMENDED

A major rally was held by tens of thousands of farmers in India in protest of new agricultural laws Sunday, campaigning against the ruling Bharatiya Janata Party (BJP) in key state polls

Farmers groups called the meeting in the city of Muzaffarnagar, in the northern state of Uttar Pradesh, India's most populous and politically significant state that goes to polls next year.

Farmers are demanding the repeal of three contentious laws that they say will threaten their livelihoods.

"Farmers, workers and people are angry ... it will be good if the government understands the message going from this huge rally. Contrary to what the government says, our movement has not lost steam, it has only gathered more momentum today," farmer leader Rakesh Tikait told reporters.

The Samyukt Kisan Morcha, an umbrella body of 40 farmer unions spearheading the agitation, said the farmers will organize protests across the state and reach out to people asking them not to vote for Prime Minister Narendra Modi's BJP.

The gathering is also a mark of protest against "atrocities" by the police in northern Haryana state on August 28, when 10 people were injured after police baton-charged a group of farmers who had blocked a highway during their agitation.

At Sunday's meeting, farmers' unions deliberated on their protest agenda in the weeks ahead, which includes plans for calling an all-India shut down on Sept. 27.

Security was tightened, with some 8,000 policemen being deployed to maintain law and order at the gathering that farmers groups claim is the biggest since their protest began in November 2020.

In January, protesters had clashed with security forces in New Delhi, leaving at least one farmer dead and 400 police officers injured.

A large number of farmers have camped out on the borders of Delhi since the protest began, demanding the withdrawal of the agricultural laws that the government says will modernize and energize the farming sector, on which more than 50% of India's population depends for a living.

The farmers fear that laws that aim to ease regulations around the storage and marketing of crops will benefit big corporations and leave them at the mercy of the free market.

The Indian government has said it is open to resuming talks with farmers on the issue after several rounds of talks yielded no breakthrough.

Farmers "are our own flesh and blood. We need to start re-engaging with them in a respectful manner: understand their pain, their point of view and work with them in reaching common ground," he said.