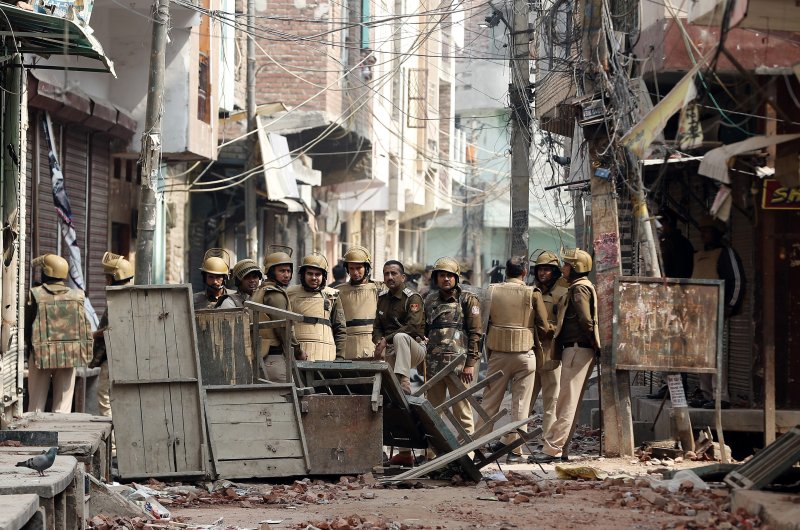 Following mounting international criticism for failing to protect minority Muslims, Indian police have arrested 514 people for deadly Hindu-Muslim violence that broke out in the capital. Police said that the toll from days of blood-letting stood at 35, but local media, citing unnamed sources, said it was likely to be more than 40 as the full extent of the violence that began on Sunday in a densely packed locality in northeastern Delhi becomes clear.

This week, New Delhi witnessed the killing of Muslims and the setting of mosques on fire by Hindu mobs in sectarian violence fueled by the government’s ongoing anti-Muslim policies. Muslims accused police of aiding Hindu mobs in the clashes, including setting fire to mosques and a shrine. Because New Delhi is a federal territory, Narendra Modi’s government controls the city’s police force, which reports to Home Minister Amit Shah – the prime minister’s trusted confidante.

Police denied allegations that they aided the Hindu marauders or failed to stop violence against Muslims, but bystander videos appeared to show police standing by as Hindu men attacked Muslims. Other videos showed police commanding Muslims to sing India's national anthem. The Delhi High Court on Wednesday chided police for not stopping the mobs.

India’s capital has been a focus of unrest against the Citizenship Amendment Act (CAA), which makes it easier for non-Muslims from three neighboring Muslim-dominated countries to gain Indian citizenship. Protests have broken out across India since the law came into force in December, leaving at least 30 people dead in clashes with police in December, mostly in the northern state of Uttar Pradesh.

Since cruising back to power in a general election last May, Modi has aggressively carried out his party's Hindu nationalist agenda, from stripping restive Kashmir, India's only Muslim-majority region, of its statehood, to supporting a Supreme Court ruling allowing a Hindu temple to be built on the site of a Mughal-era mosque torn down by Hindu mobs in 1992.

The citizenship law is seen as a precursor to the National Register of Citizens (NRC) that would culminate in the jailing or deportation of foreigners, appeared to embolden both his followers and his opponents. The rampaging mobs, mostly Hindus attacking Muslim homes and places of worship, were a jarring reminder of the rising religious tensions under Modi.

The U.N. and the Organisation of Islamic Countries (OIC) has condemned the violence against Muslims in India and the vandalism of mosques and Muslim-owned properties.