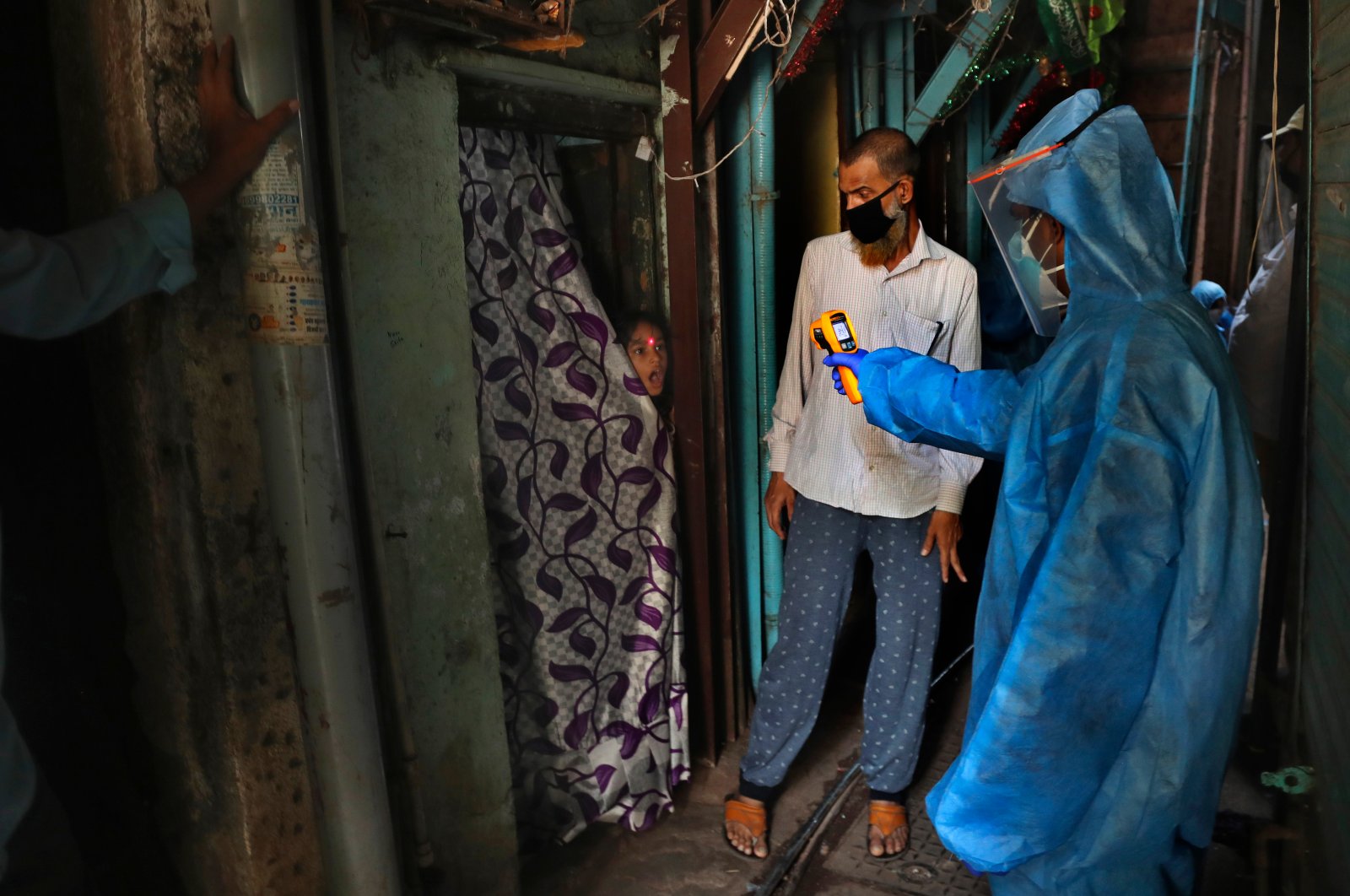 A doctor checks the temperature of a girl in Dharavi, one of Asia's largest slums, during lockdown to prevent the spread of the coronavirus in Mumbai, India. Monday, April 13, 2020. (AP Photo)
by ASSOCIATED PRESS
Jul 17, 2020 9:28 am

India crossed 1 million coronavirus cases on Friday, third only to the United States and Brazil, prompting concerns about its readiness to confront an inevitable surge that could overwhelm hospitals and test the country’s feeble health care system.

The Health Ministry also reported a record number of 687 deaths for a total of 25,602. It said 635,757 people have recovered and the recovery rate was continuing to improve at 63%.

The grim milestone comes at a time when several Indian states are imposing focused lockdowns to stem the outbreak amid frantic efforts by local governments to protect the economy.

So far, three states — Maharashtra, Delhi and Tamil Nadu — have accounted for more than half of total cases. But in India’s vast countryside, which is much less prepared and with weaker health care, the pandemic is clearly growing.

“The acceleration in cases remains the main challenge for India in the coming days,” said Dr. Ashish Jha, director of the Harvard Global Health Institute, adding that a vast majority of cases were still being missed.

The continuing surge has forced authorities to reinstate lockdowns in some cities and states.

In Bangalore, a city that prides itself as the center of of Indian technology innovation, the government ordered a weeklong lockdown that began Tuesday evening after the cases surged exponentially.

In Bihar, an eastern state with a population of 128 million and a fragile health system, a two-week lockdown was announced Thursday.

In Uttar Pradesh, the most populous state with more than 200 million people, authorities have started placing residents under strict weekend curfews, which will remain in place until the end of the month.

Other local governments are increasingly focusing on smaller lockdowns that shield the economy. Nearly a dozen states have imposed restrictions on “containment zones” — areas that can be as small as a few houses or a street.

Dr. Anant Bhan, a global health researcher, said that India was likely to see “a series of peaks,” as the infection spread in rural areas. He pointed out that the capital of New Delhi and the financial capital, Mumbai, had already seen surges, while infections have now shifted to smaller cities.

India’s response to the virus was initially sluggish and then it bought time by locking down its entire population of 1.4 billion people when Prime Minister Narendra Modi imposed a nationwide lockdown for three weeks on March 24.

“If (the) situation is not handled in these 21 days, the country and your family could go back 21 years,” Modi said then in a televised address to Indians, many of whom were still unaware of the scale of the crisis in the country.

The nationwide lockdown, then extended for five more weeks, came at an enormous economic cost amid an unprecedented humanitarian crisis when millions of impoverished migrant workers were forced to return to the countryside due to job losses and hunger.

Aimed at increasing the capacity of the health care system, the lockdown slowed down the virus, but it wasn't enough. Cases kept increasing while testing still remained abysmally low and the virus rocketed through India’s vast landscape — from high up in the Himalayan Kashmir to the sprawling beaches of Kanyakumari in Tamil Nadu.

Muliyil said that India had to try and slow down the virus because it didn’t have enough beds but was only partly successful since the “requirement was quite large.”

India’s public health care system is one of the most chronically underfunded in the world and access to hospitals in rural areas is very low. Experts say the challenge for India will be to tightrope the opening up of the economy while trying to restrict the increase in cases to manageable levels that don’t overwhelm hospitals.

“India’s strategy going forward will revolve around containment zones,” said Rajesh Bhushan of India’s federal Health Ministry. Once more zones are mapped out, health care workers will go from house to house and test those with symptoms, he said.

Dr. Ujjwal Parakh, a senior consultant at the department of respiratory medicine at Ganga Ram Hospital, New Delhi, said authorities could have been more transparent about testing guidelines.

Initially, India had some of the world’s most stringent testing criteria and used only about a third of its testing capacity. After months of sluggishness, it has now ramped up testing, from a single lab in January to over 1,200. Over 300,000 samples are being tested every day. In some cities, it has also allowed tests without a doctor’s prescription. “The battle plan is to do all the things we know work. Open the economy, as much as it is safe. Track things very closely,” said Jha. "But don’t let the virus get a foothold.”