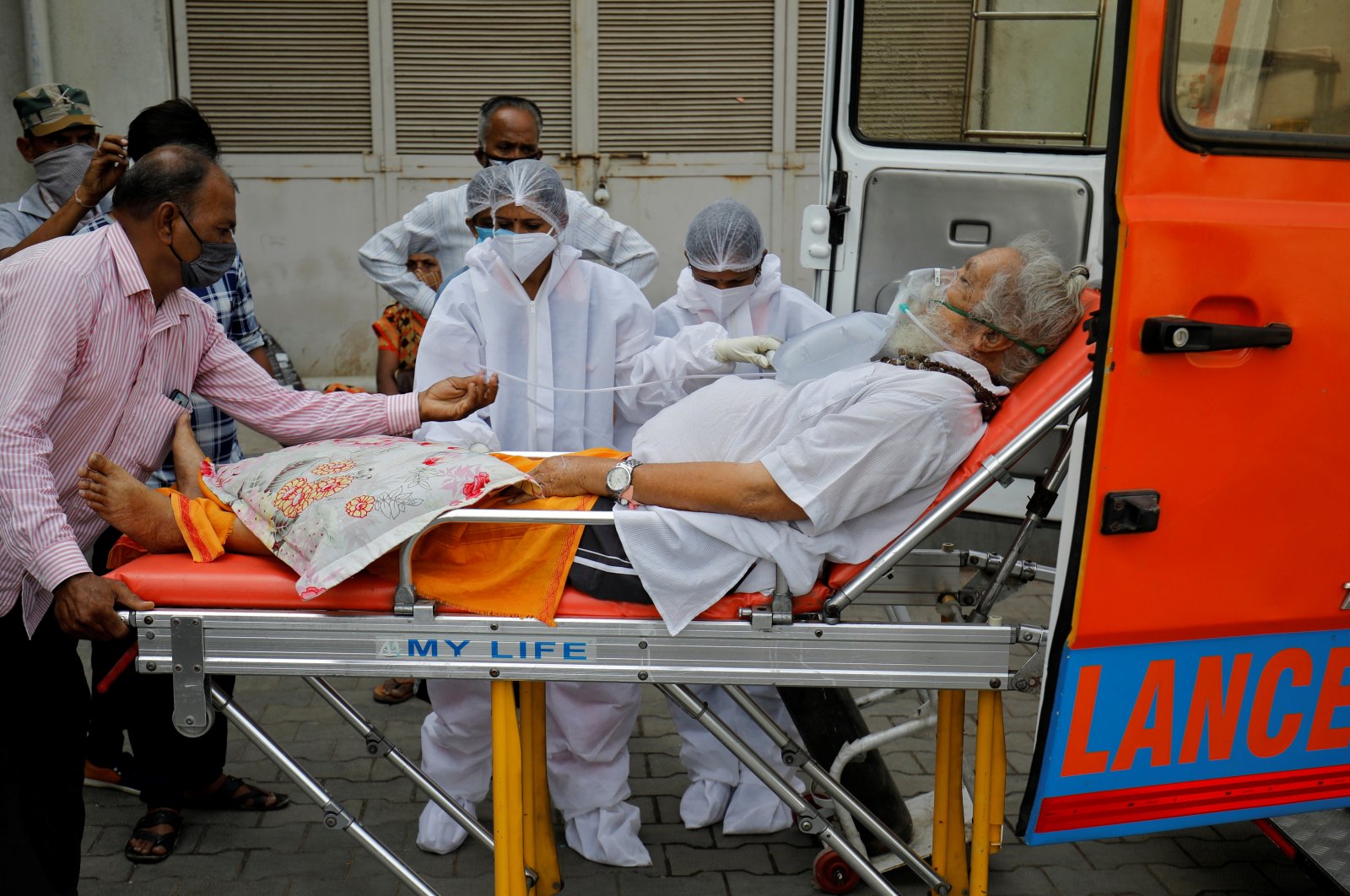 A patient wearing an oxygen mask is wheeled inside a COVID-19 hospital for treatment amid the spread of the coronavirus in Ahmedabad, India, April 26, 2021. (Amit Dave via REUTERS)
by Anadolu Agency Apr 26, 2021 11:23 am
RECOMMENDED

A surge in recent days has seen patients' families taking to social media to beg for oxygen supplies and locations of available hospital beds and has forced the capital New Delhi to extend a weeklong lockdown.

On Friday afternoon, 54-year-old Atul Bansal made a video call from a hospital intensive care unit to his wife Anuradha Gupta assuring her he would be coming home soon.

"I am totally fine and will be back soon, in two days," Bansal said in the brief conversation.

But the hope of her husband's return did not last long. Hours later, Gupta got a call from Jaipur Golden Hospital in the Indian capital New Delhi asking her to come there immediately as her husband's condition was deteriorating.

"When I reached there, I saw him gasping for breath. His face is still running through my head," she said, grief stricken, recalling her last moments with him before he passed away.

"My husband didn't want to die, leaving us behind. He wanted to come home. But they have murdered him," Gupta told Anadolu Agency (AA) on Sunday, as she accused the hospital authorities of callousness, saying they did not inform the family about the oxygen shortage.

"With my husband's death, the entire family is dead. We are only moving souls. I have decided to fight till I and my two daughters get justice."

Gupta's story is not the only one. With India witnessing a staggering surge in infections of more than 300,000 a day since Thursday, hospitals across the country are struggling to maintain oxygen supplies, resulting in many people dying as they desperately wait for a hospital bed or oxygen. And the oxygen shortage is devastating for the families.

On Saturday night, a desperate appeal came from New Delhi resident Aliya on her Twitter handle seeking help for her coronavirus-positive uncle, whose blood oxygen level had dropped to 36%.

Even after her tweet was noticed and many tried to look for a hospital, her 57-year-old uncle Farhad Ahmad died as he could not get a bed in a hospital to stabilize his oxygen level.

"We could not find a hospital. One hospital had beds, but they weren't willing to take him because they had no oxygen," she told AA. "The government is responsible for his death."

In the capital New Delhi, the only news attracting attention these days is hospitals continuously raising the alarm about supply shortages.

"Hospital in crisis mode fourth time in 24 hours. Alarms beginning to ring in ventilators and BiPAP machines. Lives of more than 100 patients at risk," New Delhi-based Sir Ganga Ram Hospital said in a statement at midnight on Saturday. After several hours, the hospital said 5 tons of oxygen were received and it should last for 11-12 hours.

But not every hospital is as lucky. Doctors at Golden Jaipur Hospital, where 20 patients died because of the low oxygen supply late Friday, say the patients could have been saved.

"Those patients who died were very critical and required a high flow of oxygen," Dr. D. K. Baluja, the hospital's medical director, told AA. "If we had continuous supply, maybe we could have saved them. On Friday night, our supply came seven hours late."

Worst yet to come

On Sunday morning, the Press Club of India mourned the loss of its member Manikant Thakur, who was also a top Indian government official.

"Thakur passed away due to a scarcity of oxygen," it said.

But it is not New Delhi alone. In other parts of the country, the situation is also grim.

Priti Singh from India's Jharkhand state decided to take her parents to a hospital in a different city 300 kilometers (186 miles) away.

"There was no other option," she said. "My father needed an ICU bed, and we took him to a different city."

Back in New Delhi, those running the hospitals say that each moment is full of fear and helplessness.

"For the first time in my life, I am fearful about the next moment," said Raj Kumar Beniwal, who heads the engineering wing at Batra Hospital & Medical Research Center, describing the situation as a "nightmare."

"Even if we get oxygen supplies for the hospital, it comes in pieces ... Then we have to worry for the next moment."

He said it is the first time he feels helpless and unable to treat patients.

"The daily requirement of our hospital is around 6,000-7,000 liters of medical oxygen, but we don't have sufficient availability with us," said Beniwal.

On Monday, India recorded another global coronavirus record after it registered single-day cases over 350,000. A day earlier the chief minister of Delhi, Arvind Kejriwal, announced the extension of the lockdown for another week. He said the present oxygen requirement is 700 tons, but they are getting only 330 to 335.

While the government scrambles to find solutions as dwindling oxygen supplies are a major factor in the spike in fatalities, experts say the worst is yet to come.

"The government is not able to manage things and now people have been left to look after themselves. It is going to get worse before it improves," epidemiologist Lalit Kant told AA.

"The situation right now is that people are asked to buy essentials. This tells you the ground crisis. It is very chaotic and frightening. There is helplessness around."