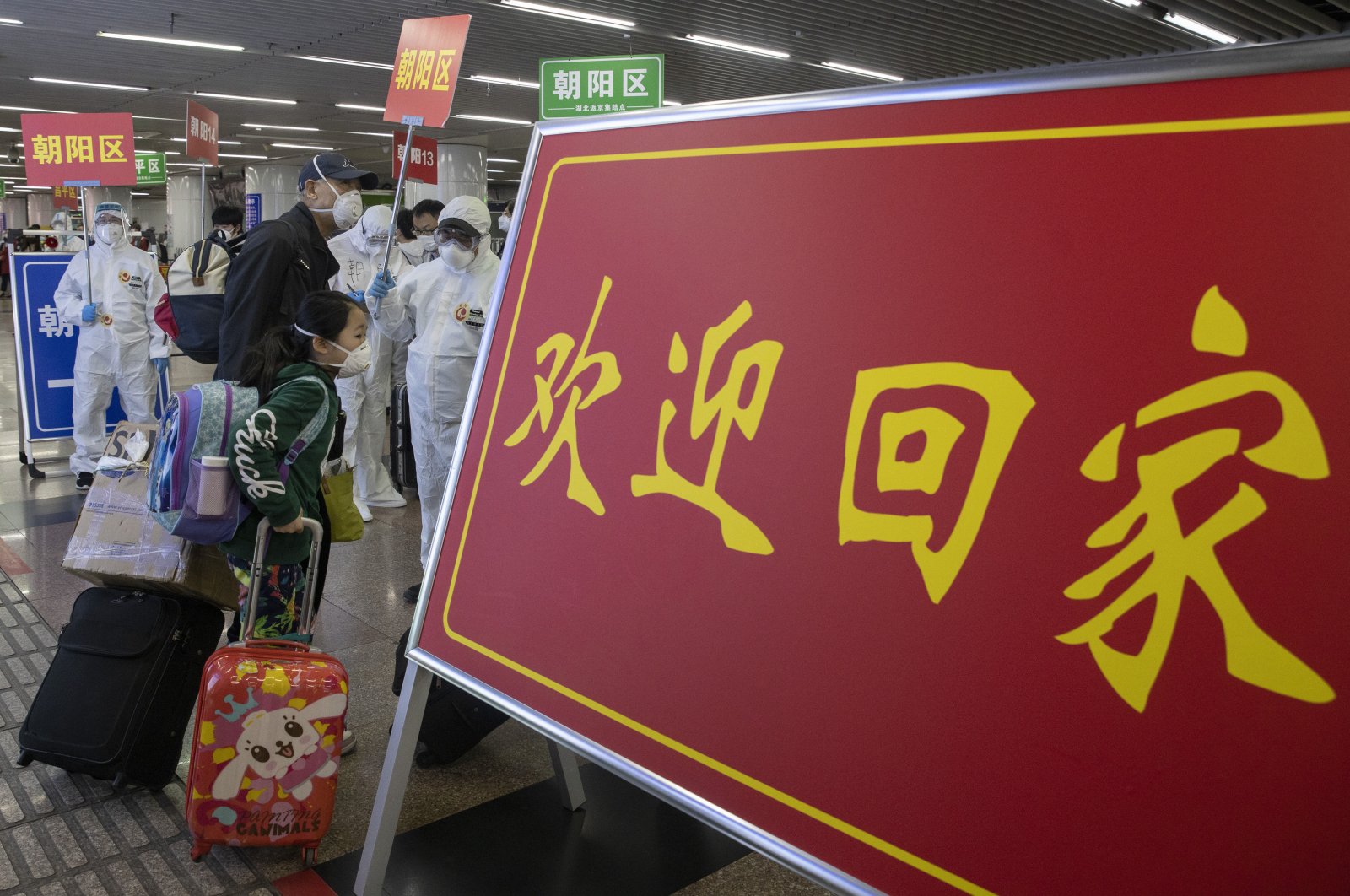 Passengers from Wuhan walk past a sign which reads "Welcome Home" after arriving on a high-speed train in Beijing, China, April 19, 2020. (AP Photo)
by Anadolu Agency Apr 20, 2020 4:22 pm
RECOMMENDED

International law experts are blaming Beijing for the losses incurred due to the novel coronavirus which emerged in Wuhan, China late last year and swelled into a pandemic.

"Under international law, China is responsible for any harm it caused to other countries, whether through acts or omissions," Tom Ginsburg, an international law and political science professor at the University of Chicago, told Anadolu Agency (AA).

"But the key question is how to get any reparation, and whether China can be found liable in a court," Ginsburg said.

"It is true that China suppressed information internally about the virus, and informed the WHO (World Health Organization) later than it could have. But the WHO Treaty only requires a country to report to the WHO, not to other countries directly," he said.

"So it is not clear what country could bring a claim before an international court, say the International Court of Justice, to find liability," he added.

According to Ginsburg, as bilateral and multilateral sanctions are often used in international law, it is possible for a state to impose sanctions on China.

"But those sanctions would themselves have to be legal under the World Trade Organization Treaty. If they are based on health concerns, they are likely valid, but if they are to punish China for its wrongful actions, they are not," he added.

Last week, in an interview with German daily Bild, United States Secretary of State Mike Pompeo hinted that China is to blame for the damage wreaked by the virus worldwide.

"There will be a time when the people responsible will be held accountable. I am very confident that this will happen," Pompeo said.

U.S. President Donald Trump has insisted on describing COVID-19 as a "Chinese virus," despite critics calling the label racist.

French President Emmanuel Macron also questioned China's handling of the outbreak, saying it was naive to suggest that it had dealt with the crisis well.

On Thursday, British Foreign Secretary Dominic Raab said, "We'll have to ask the hard questions about how it came about and how it couldn't have been stopped earlier."

"We can't have business as usual after this crisis," he added.

China failed to report on virus

Ford Fu-Te Liao, a research professor at Taiwan-based Academia Sinica, told AA that China may have violated international health regulations as it failed to report to the WHO on time despite sufficient information.

"According to WHO Constitution Article 75, any question or dispute ... which is not settled by negotiation or by the Health Assembly shall be referred to the International Court of Justice ... unless the parties concerned agree on another mode of settlement," Liao said.

This means countries who have suffered are entitled to compensation by China.

The pandemic has killed over 166,000 people and infected more than 2.42 million, while over 635,000 have recovered from the disease, according to figures compiled by the U.S.-based Johns Hopkins University.

According to Shih-Ming Kao, a professor at the Graduate Institute of Marine Affairs at the Taiwan-based National Sun Yat-sen University, it is unlikely that states would seek sanctions through international laws or the WHO.

"International laws are ‘weak' laws comparing to domestic laws, thus it is difficult to bring the case before the court such as the International Court of Justice if China refuses to accept," Kao said.

"Even when the Court rules that it has the jurisdiction and gives the final award, China could also simply ignore it. The South China Sea Arbitration Case is the best example," he said, referring to a 2016 case in which The Hague favored the Philippines against Beijing over disputed waters.

"It seems that WHO does not have any compulsory measures to sanction any of its member states," he said.

Even though the United Nations Security Council could be a possible forum, China is a permanent member with veto rights, he said.

"At most, this approach could only disgrace China's reputation, but nothing more," he said.

According to Kao, the only possible way forward could be collective action, such as economic sanctions against China.

In this way, he added, "China might be 'forced' to provide official apologies and necessary compensations to these suffered states."