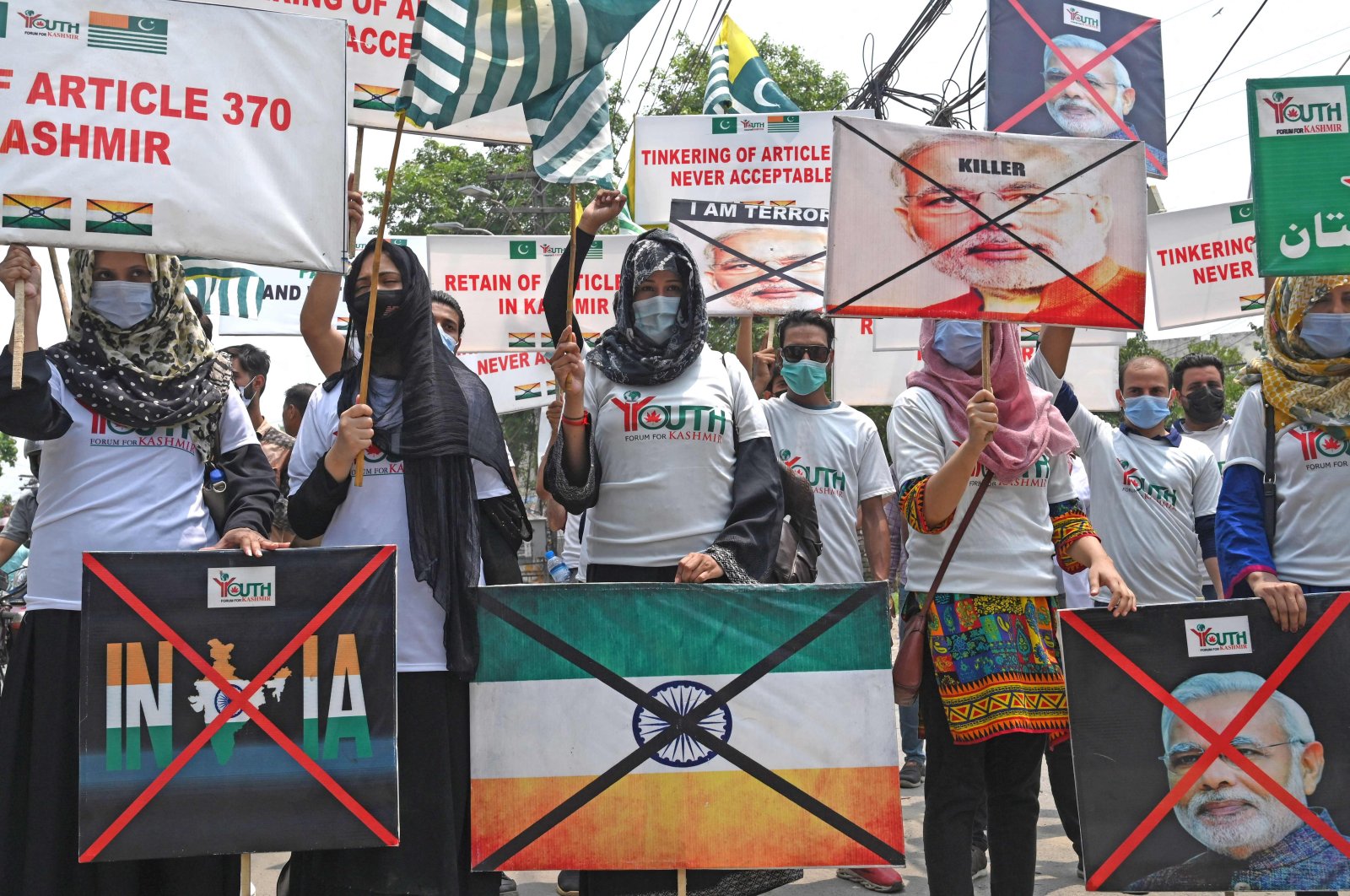 Activists from the "Youth Forum for Kashmir" carry placards to show solidarity with the Kashmiri people during a rally on the second anniversary of the abrogation of Article 370, Lahore, Pakistan, Aug. 5, 2021. (AFP Photo)
by DAILY SABAH WITH AGENCIES Aug 05, 2021 11:54 am

Two years have passed since New Delhi stripped Indian-administered Kashmir of its limited autonomy. The move, which is seen by activists and world leaders as illegal and based on the desire to change the Muslim-majority area's demography, has dragged political activity into a deep crisis, with businesses struggling and the rights of people infringed upon by strict laws.

Kashmir has been divided between India and Pakistan since the end of British colonial rule in 1947, with both countries claiming the territory in full. Fighting in the Indian-controlled part has left tens of thousands, mostly civilians, dead. Prime Minister Narendra Modi's government scrapped the region's partial autonomy on Aug. 5, 2019, and split it into two federal territories, arresting thousands in a massive security operation and communications blackout that lasted months.

The Indian government annulled two laws of the Indian Constitution – Article 370 and Article 35A – that loosely governed India’s relationship with the disputed Muslim-majority region. Though hollowed out over the past seven decades through changes to India's Constitution via underhanded methods and pliant Kashmiri pro-India regimes, Article 370 still nominally defined the region as having its own constitution and two houses of legislature that, unlike all other Indian states, could make laws independent of India’s Parliament. Article 35A barred all outsiders from purchasing property and applying for government jobs in the region. Effectively, it helped the local legislature to define the "permanent residents" of the region and safeguarded jobs and land rights, not only for the 68.31% Muslim majority but also the 28.43% Hindus minority and the nearly 4% of the population composed of other minorities.

Ahead of the second anniversary, security forces erected numerous new checkpoints and barricades across Srinagar with personnel in bulletproof gear checking vehicles and frisking residents on the roads. Suspected rebels fired at a police patrol in the northwestern Sopore area, but no one was injured, a police officer told Agence France-Presse (AFP). However, district police refuted the incident on Twitter.

A top pro-freedom leader Syed Ali Geelani, 90, called for a general shutdown to mark a "black day" to protest "India's naked aggression," in a Twitter statement by his Pakistan-based representative Syed Abdullah Geelani. The call was supported by several smaller separatist groups who also challenge India's rule of Kashmir.

Police initially termed the Twitter handle and statement as "fake." But the ailing Geelani, under house arrest for most of the last 13 years, issued his first video in two years Wednesday, confirming the statement via his "nominated special representative."

On Thursday, most shops remained closed in Srinagar and vehicular movement on the roads was thin. However, police were seen asking shopkeepers to open. Many shopkeepers and businesspersons, without wishing to be named, told AFP that police had threatened them. Local reporters said officers were breaking locks on shutters.

"I was recording video of shuttered shops when police officers arrived and took my photos while I was working and accused myself and journalists of instigating a shutdown," photojournalist Umer Asif told AFP.

Former Kashmir chief minister Mehbooba Mufti, along with dozens of other local politicians, spent months incarcerated after being arrested in the 2019 clampdown. Scores of people remain behind bars either in Kashmir or elsewhere, held under controversial legislation that allows them to be detained for up to two years without charge. Mufti issued an angry statement on Wednesday slamming New Delhi's actions as "daylight robbery" of people's constitutional rights.

"When unbridled oppression is unleashed & gross injustice heaped there is no other choice but to resist to exist," she tweeted.

As more rallies were expected across Kashmir, a march was organized in the Pakistani capital Islamabad to display the solidarity between Pakistan and Jammu and Kashmir. The march was led by the Pakistani Foreign Minister Shah Mehmood Qureshi from the Foreign Ministry to the parliament. The group rallied under Qureshi’s leadership toward the capital city Islamabad's D-Chowk Boulevard.

Those in attendance carried banners with messages of support for the people of Jammu and Kashmir and shouted slogans against India. Speaking at the march, Qureshi said that the people of Pakistan and Kashmir deny the “‘unilateral and illegal”’ step taken by the Indian administration.

"The entire Pakistani nation and Kashmiris reject the illegal and unilateral steps of Aug. 5, 2019," Qureshi said, urging the U.N. and the international community to take "immediate action" and stop India from "bringing demographic changes in the disputed valley," according to Anadolu Agency (AA).

Pakistani President Arif Alvi joined the march at D-Chowk Boulevard and said that Pakistan will continue its support of the rightful cause of the people of Jammu and Kashmir. Prime Minister Imran Khan said Thursday that New Delhi has failed to break the will of the Kashmiri people.

"Today marks two years since India's illegal and unilateral actions of 5 August 2019 in Indian Illegally Occupied Jammu and Kashmir (IIOJK)," he said. "These actions were followed by an unprecedented military siege and restrictions on fundamental rights and freedoms of the Kashmiri people to perpetuate Indian occupation in the occupied territory." He added that Kashmiris face unabated extrajudicial killings, custodial torture, and death, arbitrary detentions, burning and looting of houses to inflict collective punishment, and other forms of human rights abuses. Khan accused India of bringing demographic changes to the disputed territory through domicile and land ownership laws. He said India's "unilateral actions" are aimed at changing the region's demographic structure, and converting Kashmiris into a "minority in their own land."

The revocation of Kashmir's autonomy brought political instability to the region, but New Delhi attempted to show “normalcy” in the disputed Himalayan territory. Between November to December 2020, multiphase local elections were held in the region to elect 280 district development councilors.

While elected members of district development boards do not have the authority to make laws or amend laws, many have since been restricted to hotel rooms in various locations and prevented from visiting their districts due to "security threats." Many elected councilors, unhappy with the government's treatment, have threatened to quit.

Mohammed Yousuf Tarigami, a former minister and four-time legislator from the Communist Party of India-Marxist (CPM) told Qatar-based media outlet Al-Jazeera that pro-India politicians in the region say that New Delhi's treatment of officials in Kashmir “(has) damaged the very bond of our relationship with the union of India.”

“There is no political space left for anyone,” Tarigami said, adding that a fallout of the right-wing Bharatiya Janata Party (BJP) government's 2019 decision has been “a process of throttling of democracy and democratic rights, which have resulted in a forced silence” in the region.

“Unconscionable suppression of civil and democratic rights continues unabated. Indiscriminate arrests and harassment of all sections of our people, including government employees, on different pretexts, continues.”