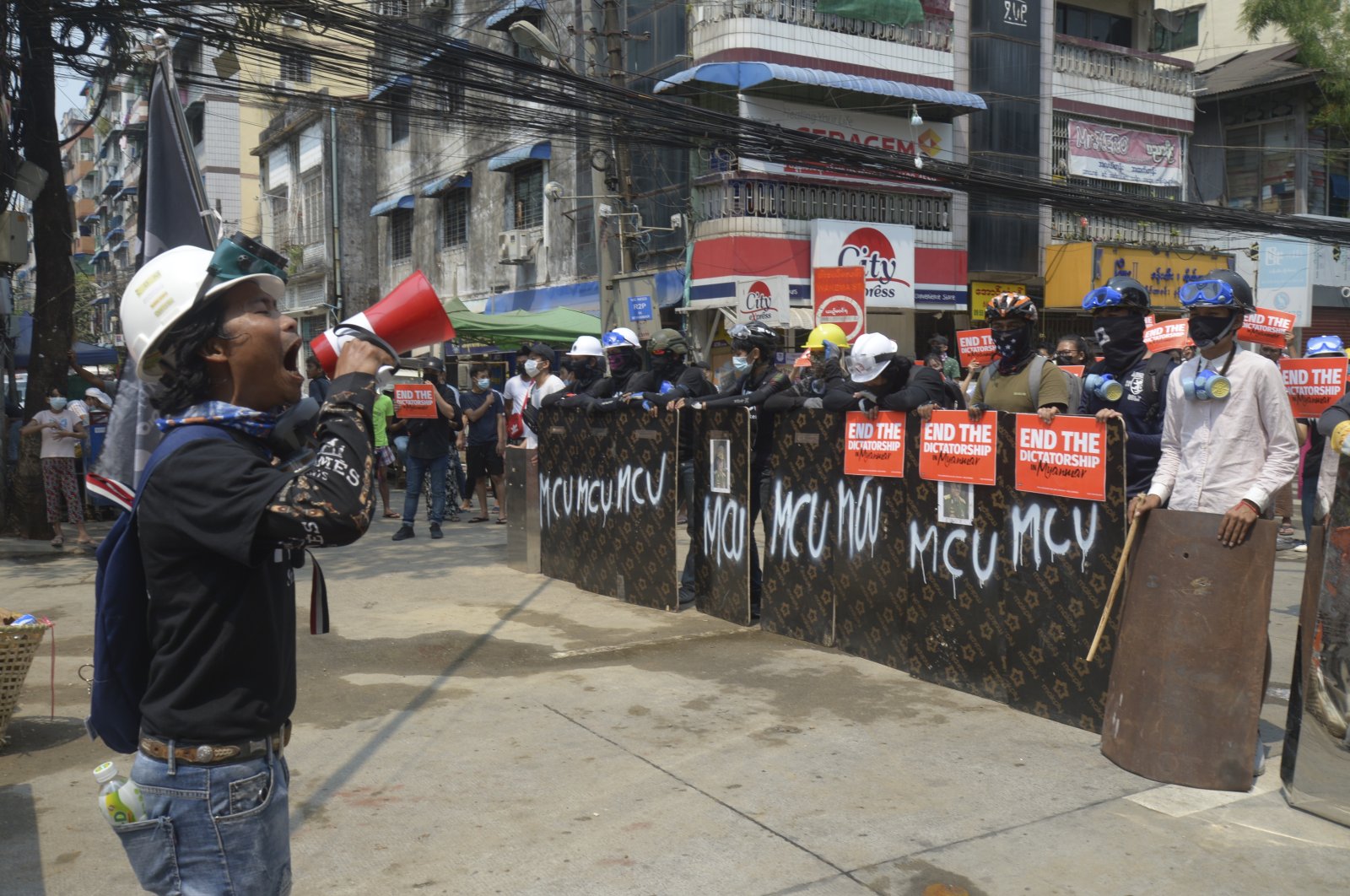 Anti-coup protesters gather with makeshift shields during a demonstration in Yangon, Myanmar, March 12, 2021. (AP Photo)
by Agencies Mar 12, 2021 11:19 am
RECOMMENDED

Protests were held in Yangon, Myanmar's biggest city, and several other towns on Friday, according to photographs posted on social media by witnesses and local news organizations. There were no immediate reports of violence.

The killing of protestors by Myanmar's security forces Thursday spurred a U.N. Security Council appeal to stop using lethal force and as an independent U.N. expert cited growing evidence of crimes against humanity.

The military also lodged a new allegation against Suu Kyi, alleging that in 2017-18 she was illegally given $600,000 and gold bars worth slightly less by a political ally. She and President Win Myint have been detained on less serious allegations and the new accusation was clearly aimed at discrediting Suu Kyi and perhaps charging her with a serious crime.

Military spokesperson Brig. Gen. Zaw Min Tun said at a news conference in the capital that former Yangon Division Chief Minister Phyo Min Thein had admitted giving the money and gold to Suu Kyi but presented no evidence. Myanmar has been roiled by protests, strikes and other acts of civil disobedience since the coup toppled Suu Kyi’s government on Feb. 1 just as it was to start its second term.

Suu Kyi's lawyer on Friday rejected junta allegations of corruption as "groundless," calling it "illegal mudslinging" by the generals who seized power from her.

"This allegation against Daw Aung San Suu Kyi, the state counselor, is groundless, especially regarding the dollars and gold bars – it is the most hilarious joke of all," her lawyer Khin Maung Zaw told Agence France-Presse (AFP). "I've never seen such an illegal mudslinging."

The veteran human rights lawyer – who in the past went up against Suu Kyi's administration in defending two journalists reporting on the Rohingya crisis – said he has his differences with her.

"She may have her defects but bribery and corruption aren't her traits," he said.

The Nobel laureate has also been accused of violating a communications law and of intent to incite public unrest.

A hearing is scheduled for March 15, but so far Khin Maung Zaw has not been able to have a private meeting with his client.

"I'm frustrated because my client is not given the rights of defense and the rights of a fair trial," he said, adding that he is nonetheless preparing for Monday's hearing. "I'm not worried about these four cases (charges) but other allegations could occur and other cases could pile up, resulting in false charges and false accusations," he told AFP.

The takeover reversed years of slow progress toward democracy in the Southeast Asian nation after five decades of military rule. Local press reports and posts on social media on Thursday said there were six deaths in Myaing, a town in the central Magway Region, and one each in Yangon, Mandalay, Bago and Taungoo.

In many cases, photos of what were said to be the bodies of the dead were posted online. Security forces have attacked previous protests with live ammunition as well, leading to the deaths of at least 60 people.

They have also employed tear gas, rubber bullets, water cannons and stun grenades. Many demonstrators have been brutally beaten. On Wednesday, the U.N. Security Council unanimously called for reversing the coup and strongly condemned the violence against peaceful protesters. It also called for "utmost restraint” by the military.

An independent U.N. rights expert focusing on Myanmar told the U.N.-backed Human Rights Council on Thursday that violence against protesters and even "people sitting peacefully in their homes” was rising. He said the junta was detaining dozens, sometimes hundreds, of people every day.

He acknowledged a formal determination requires a full investigation and trial. He is working under a mandate from the council and does not speak for the U.N. The human rights group Amnesty International on Thursday issued a report saying Myanmar’s military "is using increasingly lethal tactics and weapons normally seen on the battlefield against peaceful protesters and bystanders across the country,” according to The Associated Press (AP).

The London-based group said its examination of more than 50 videos from the crackdown confirmed that "security forces appear to be implementing planned, systematic strategies including the ramped-up use of lethal force. Many of the killings documented amount to extrajudicial executions.”

"These are not the actions of overwhelmed, individual officers making poor decisions. These are unrepentant commanders already implicated in crimes against humanity, deploying their troops and murderous methods in the open,” Joanne Mariner, its director of crisis response, said in a statement.

As widespread street protests against the coup continue, the junta is facing a new challenge from the country’s ethnic guerrilla forces, which until recently had limited themselves to verbal denunciations of last month’s coup.

Reports from Kachin, the northernmost state, said guerrilla forces from the Kachin ethnic minority attacked a government base on Thursday and were in turn attacked. Kachin Independence Army (KIA) is the armed wing of the Kachin political movement.

"This morning in Hpakant township, the Kachin Independence Organization (KIO/KIA) attacked a military council battalion based in Sezin village, and the KIO/KIA’s Hpakant-based 9th Brigade and 26 battalions were attacked by a helicopter. Both sides are still investigating,” the 74 Media reported on Twitter.

A Facebook page for the Kachin Liberation Media said the KIA had overrun the government outpost and seized ammunition. It warned the government against using lethal force to break up anti-coup protests in the Kachin capital, Myitkyina, where two demonstrators were killed this week. The reports could not be independently confirmed, and ethnic guerrilla armies as well as the government often release exaggerated information.

However, even making such an announcement amounts to a sharp warning to the government. The Kachin actions come a few days after another ethnic guerrilla force belonging to the Karen minority announced it would protect demonstrators in the territory it controlled.

The Karen National Union deployed armed combatants to guard a protest in Myanmar’s southeastern Tanintharyi Region. Myanmar has more than a dozen ethnic guerrilla armies, mostly in border areas, a legacy of decades-old struggles for greater autonomy from the central government.

Many have formal or informal cease-fire agreements with the government, but armed clashes still occur. There has been speculation that some ethnic groups could form a de facto alliance with the protest movement to pressure the government.