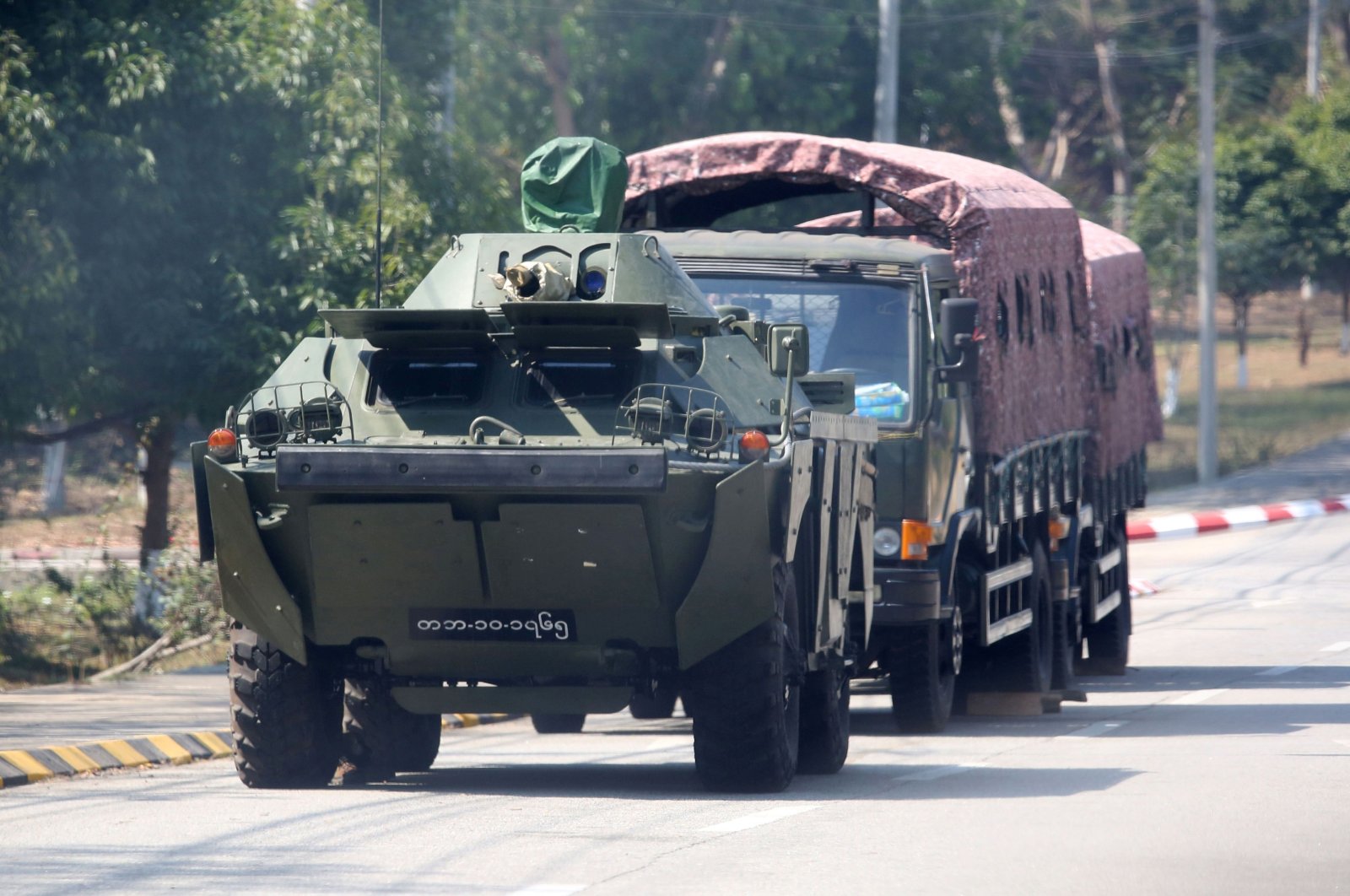 An armoured vehicle is parked on a blockaded road near Myanmar's Parliament in Naypyidaw on February 4, 2021. (AFP Photo)
by ASSOCIATED PRESS Feb 04, 2021 11:13 am
RECOMMENDED

Myanmar's new military government has restricted Facebook access as resistance to Monday's coup intensified amid calls for civil disobedience to protest the overthrow of the elected civilian government and its leader, Aung San Suu Kyi.

Facebook is especially popular in Myanmar and the ousted government had commonly made public announcements on the social media site.

Internet users said the disruption began late Wednesday night, and mobile service provider Telenor Myanmar confirmed in a statement that mobile operators and internet service providers in Myanmar had received a directive from the communications ministry to temporarily block Facebook.

Telenor Myanmar, which is part of the Norwegian Telenor Group, said it would comply, though was concerned the order was a breach of human rights.

“Telecom providers in Myanmar have been ordered to temporarily block Facebook. We urge authorities to restore connectivity so that people in Myanmar can communicate with family and friends and access important information,” said a Facebook spokesperson.

The political party ousted in Monday’s coup and other activists in Myanmar have called for a campaign of civil disobedience to oppose the takeover. In the vanguard are medical personnel, who have declared they won’t work for the military government and who are highly respected for their work during the coronavirus pandemic that is taxing on the country’s dangerously inadequate health system.

For a second night Wednesday, residents in Yangon engaged in “noise protests,” with people banging pots and pans and honking car horns under the cover of darkness. The recent protests have also revived a song closely associated with the failed 1988 uprising against the military dictatorship. Myanmar was under military rule for five decades after a 1962 coup, and Suu Kyi’s five years as the leader was its most democratic period.

Videos posted on social media showed medical personnel especially turned out to sing the song “Kabar Makyay Bu” — or “We Won’t Be Satisfied Until the End of the World” — which is sung to the tune of “Dust in the Wind,” a 1977 song by the U.S. rock group Kansas.

The protest movement seemed to have gotten a boost from the government’s treatment of the highly popular Suu Kyi, who was detained along with other government leaders on Monday. Her party said Wednesday she was being charged with possessing illegally imported walkie-talkies — believed to be used by her bodyguards — that were found in her house in the capital Naypyitaw.

The charge would allow her to legally be kept in custody until at least Feb. 15. The ousted President Win Myint is being held on a separate charge. Suu Kyi is believed to remain under house arrest at her residence, where she was kept after the army detained her.

The charge against Suu Kyi carried a penalty of up to three years in prison.