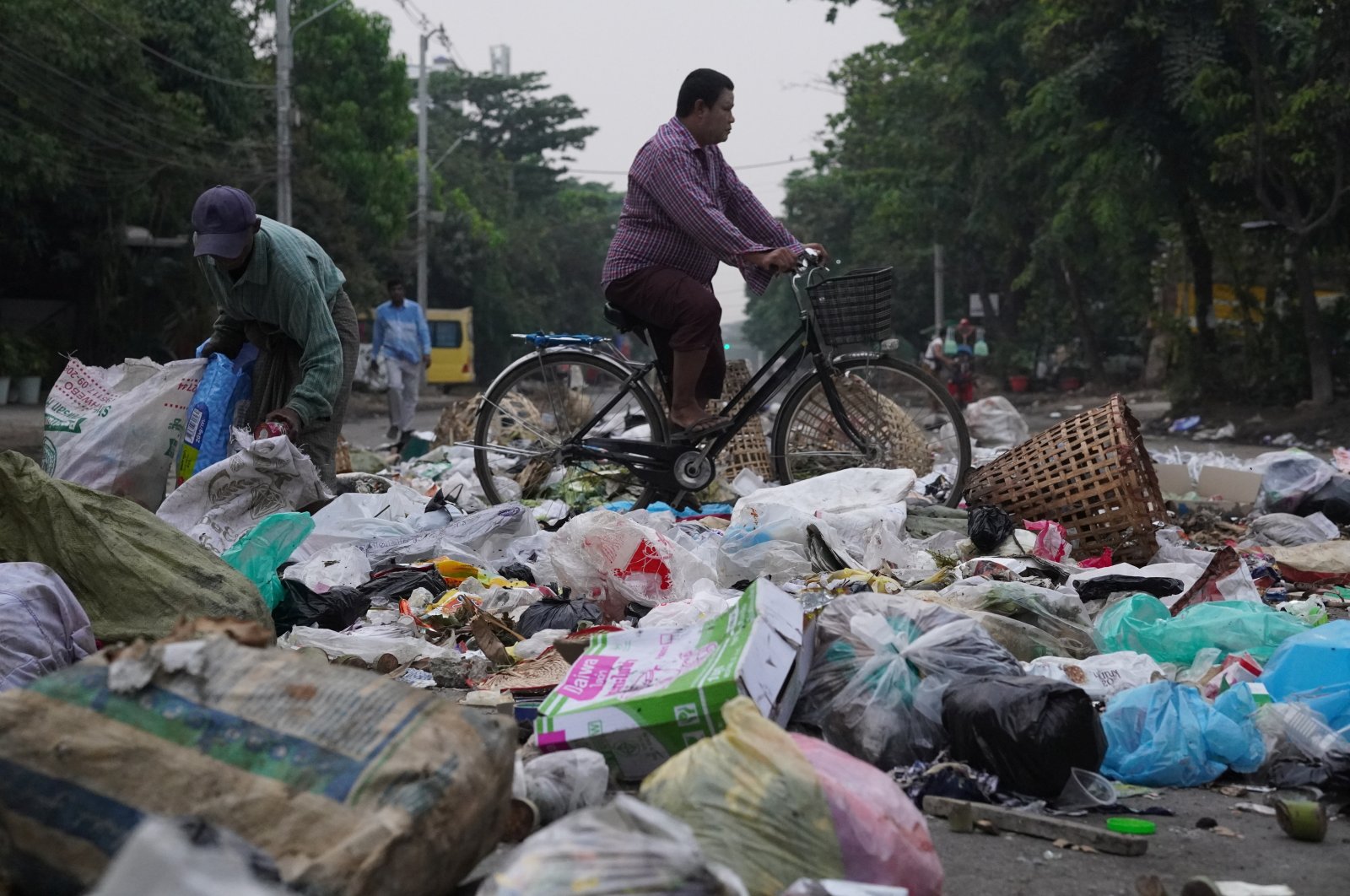 Residents use trash to block streets as a form of protest in Thaketa township, Yangon, Myanmar, in this image obtained by Reuters on March 30, 2021. (Reuters Photo)
by REUTERS Mar 30, 2021 11:11 am
RECOMMENDED

Rubbish piled up on the streets of Myanmar's main city on Tuesday after activists launched a "garbage strike" to oppose military rule as the toll of pro-democracy protesters killed by the security forces since a Feb. 1 coup rose to more than 500.

Out of 14 civilians killed on Monday, the Assistance Association for Political Prisoners (AAPP) said at least eight were in the South Dagon district of the biggest city, Yangon.

Security forces in the area fired a heavier caliber weapon than usual on Monday towards protesters crouching behind a barricade of sand bags, witnesses said. It was not immediately clear what weapon it was but it was believed to be some type of grenade launcher.

State television said security forces used "riot weapons" to disperse a crowd of "violent terrorist people" who were destroying a pavement and one man was wounded.

A South Dagon resident said on Tuesday security forces had been cracking down in the area overnight, raising concern of more casualties.

"There was shooting all night," said the resident who declined to be identified.

Residents found a badly burned body on a street in the morning, the resident said, adding it was not known what had happened to the person and the military took the body away.

Police and a junta spokesperson did not answer calls seeking comment.

Thousands of protesters came out in several other towns across the country, according to media and photos on social media. There were no immediate reports of violence.

A civil disobedience campaign of strikes against military rule has paralyzed large parts of the economy and in a new tactic, protesters sought to step up the campaign by asking residents to leave garbage at main road intersections.

"This garbage strike is a strike to oppose the junta," read a poster on social media. "Everyone can join."

Pictures posted on social media showed piles of rubbish building up in Yangon.

The campaign comes in defiance of calls issued via loudspeakers in some neighborhoods of Yangon on Monday urging residents to dispose of garbage properly.

At least 510 civilians had been killed in nearly two months of opposition to the ouster of an elected government led by Nobel laureate Aung San Suu Kyi, and the return of military rule after a decade of tentative steps towards democracy, according to a tally by the AAPP advocacy group.

The total killed on Saturday, the bloodiest day of the protests, had risen to 141, its figures showed.

One of the main groups behind the protests, the General Strike Committee of Nationalities, called on Monday in an open letter for ethnic minority forces to help those standing up to the "unfair oppression" of the military.

In a sign that the call may be gaining more traction, three groups – the Myanmar National Democratic Alliance Army, the Arakan Army (AA) and Ta'ang National Liberation Army – called in a joint statement on Tuesday for the military to stop killing protesters and resolve political issues.

If not, they said they would cooperate with all ethnic groups "who are joining Myanmar's spring revolution" to defend themselves.

Insurgents from different ethnic groups have battled the central government for decades for greater autonomy. Though many groups have agreed to cease-fires, fighting has flared in recent days between the army and forces in both the east and north.

Heavy clashes erupted on the weekend near the Thai border between the army and fighters from Myanmar's oldest ethnic minority force, the Karen National Union (KNU), which has also denounced the coup.

About 3,000 villagers fled to Thailand when military jets bombed a KNU area.

Thailand has denied accounts by activist groups that refugees were being forced back. Its foreign ministry said there was no policy of turning away refugees fleeing conflict and they would be accepted on humanitarian grounds.

More than a dozen people were allowed to cross into Thailand on Tuesday for medical treatment at a border village, Reuters witnesses said.

Myanmar's military has for decades justified its grip on power by saying it is the only institution capable of preserving national unity. It seized power saying that November elections won by Suu Kyi's party were fraudulent, an assertion dismissed by the election commission.

But foreign criticism and Western sanctions have failed to sway the generals and Suu Kyi remains in detention at an undisclosed location and many other figures in her party are also in custody.