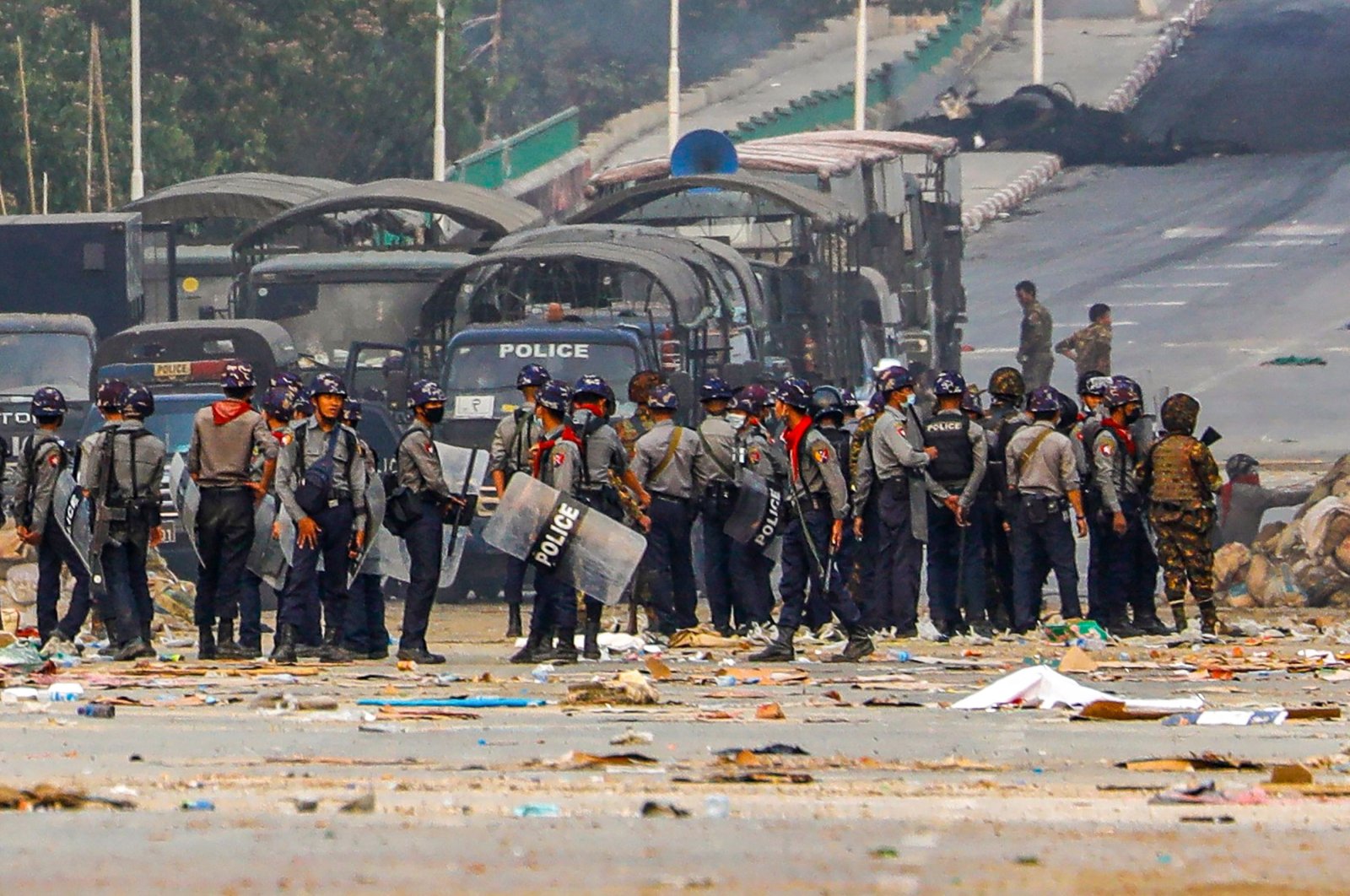 Police stand near makeshift barricades set up by protesters during a crackdown on demonstrations against the military coup in Hlaing Tharyar township in Yangon, Myanmar, March 14, 2021. (STR / AFP)
by REUTERS Mar 16, 2021 1:11 pm
RECOMMENDED

Some officials from a George Soros-linked foundation have been suspended for passing funds to opponents of the Feb. 1 coup in Myanmar. The authorities have already detained one official and are looking for 11 others. The military ruling Myanmar is accusing officials of helping the civil disobedience movement (CDM) that was launched to campaign for the release of the detained government leader Aung San Suu Kyi and recognizes her party's Nov. 8 election victory.

The military has responded to the CDM with a crackdown on pro-democracy protests, killing more than 180 people over weeks, a human rights group said, while taking legal action against Suu Kyi and others.

The Global New Light of Myanmar newspaper, which has been for years a mouthpiece of the military, said the Open Society Myanmar (OSM) organization transferred funds without seeking permission from the Foreign Exchange Management Department.

The group then exchanged $1.4 million into Myanmar's kyat currency "without following the necessary rules and regulations," the paper said.

It then suggested that unidentified non-governmental organizations were "providing cash assistance to CDM movements."

The paper said the finance officer of Open Society Myanmar, Phyu Pa Pa Thaw, had been interrogated since last Friday about "that cash flow into the CDM movement."

Authorities were looking for 11 other OSM employees to interrogate them, it added.

On its website, the Open Society Foundations says it is the world’s largest private funder of independent groups working for justice, democratic governance, and human rights.

It provides grants through a network of national and regional foundations and offices, funding an array of projects.

Soros, a billionaire who made his fortune in hedge funds, has donated heavily to liberal causes and is vilified by the right-wing and left-wing movements. He is also the subject of many unfounded conspiracy theories, especially regarding U.S. involvement throughout Eurasia.

The newspaper published a picture of Suu Kyi meeting Soros in 2016 in New York and of her meeting his son, Alexander Soros, in Myanmar, but it did not link Suu Kyi or the Open Society Foundations to any alleged irregular transfer of funds.

The Open Society Foundations did not immediately respond to an emailed request for comment.