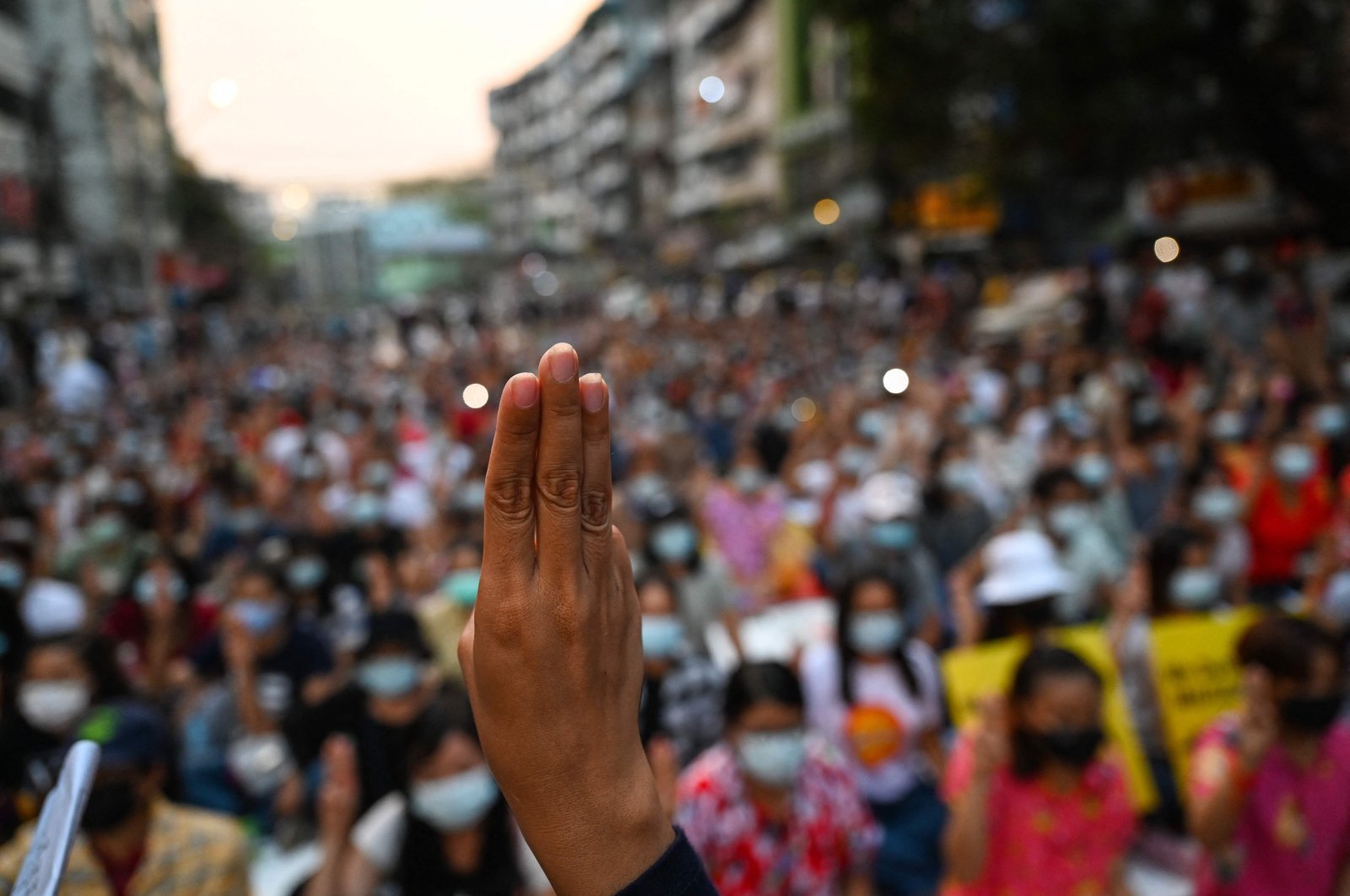 A protester makes the three-finger salute during a vigil to honor those who have died during demonstrations against the military coup in Yangon, Myanmar, March 13, 2021. (AFP Photo)
by French Press Agency - AFP Mar 16, 2021 12:22 am
RECOMMENDED

The international community pleaded for restraint Monday after at least 11 more anti-coup protesters were killed in Myanmar, as demonstrators returned to the streets to demand restored democracy despite an increasingly bloody crackdown by the military junta.

The United Nations, the United States, China and Britain all condemned the violence, which the UN said has claimed the lives of at least 138 "peaceful protesters," including women and children, since the generals ousted civilian leader Aung San Suu Kyi on February 1.

So far Myanmar's generals have shown no signs of heeding calls for restraint.

The deadliest day yet came Sunday, when more than three dozen demonstrators were killed as security forces cracked down on pro-democracy rallies.

However, the killings did not stop demonstrators, who came out again Monday only to once again face what witnesses said was lethal force by the junta.

Those killed on Monday were shot dead in several locations in the country's central regions.

"Two men were killed because of gunshots and six others were injured," a witness in Magway region's Aunglan town told Agence France-Presse (AFP), adding that one of the dead was shot in the chest.

"He was right besides me. Another one got shot in his head."

"The junta has responded to call for the restoration of democracy in Burma with bullets," U.S. State Department spokeswoman Jalina Porter told reporters Monday, using another name for Myanmar and labelling the Sunday attacks "another new low."

"The United States continues to call on all countries to take concrete actions to oppose the coup, and escalating violence," she added.

UN Secretary-General Antonio Guterres also called for the international community "including regional actors, to come together in solidarity with the people of Myanmar and their democratic aspirations," his spokesman Stephane Dujarric said Monday.

UN envoy for Myanmar Christine Schraner Burgener also condemned Sunday's bloodshed, while the country's former colonial ruler Britain said it was "appalled" by the use of force "against innocent people".

Myanmar has been in uproar since the putsch, with daily protests demanding a restoration of democracy despite the junta's increasingly forceful attempts to quell dissent.

The bulk of the deaths on Sunday came from a clash in a garment-producing district in the capital Yangon where multiple Chinese-owned factories were razed. Many protesters believe Beijing is supportive of the coup.

Six Yangon townships were under martial law by morning, anyone arrested there faces trial by military tribunal rather than civilian courts, with sentences ranging from three years' hard labour to execution.

Those clashes drew a sharp rebuke from Beijing, which on Monday urged Myanmar to "resolutely avoid a recurrence of such incidents".

China "is very concerned about the impact on the safety of Chinese institutions and personnel," he told reporters in Beijing, adding the Myanmar security forces had reinforced the area around the factories.

Taiwan, meanwhile, advised its companies in Myanmar to fly the island's flag to avoid being targeted.

Six fatalities were also reported Monday in the city of Myingyan. Among those dead were "three people, including a woman... with gunshots," said a Myingyan resident.

Both witnesses who spoke to AFP declined to be named for fear of repercussions.

There was a further death in the city of Monywa, state media said, while two men in their 20s were killed on the spot in Mandalay, according to a local doctor and an AFP reporter.

State-run television confirmed on Monday that a police officer was shot dead in the city of Bago, northeast of Yangon, during a protest.

News of the violence came out in the afternoon due to a block on mobile data networks across Myanmar, which also scuppered a scheduled video court appearance by Suu Kyi.

The court hearing for the Nobel laureate, who spent more than 15 years under house arrest during previous military rule, was scheduled for 10:00 am (0330 GMT) in Myanmar's capital Naypyidaw, but it was postponed until March 24, her lawyer Khin Maung Zaw told AFP.

"There's no court hearing because there's no internet and the hearing is conducted by video conference... We cannot do video," he said.