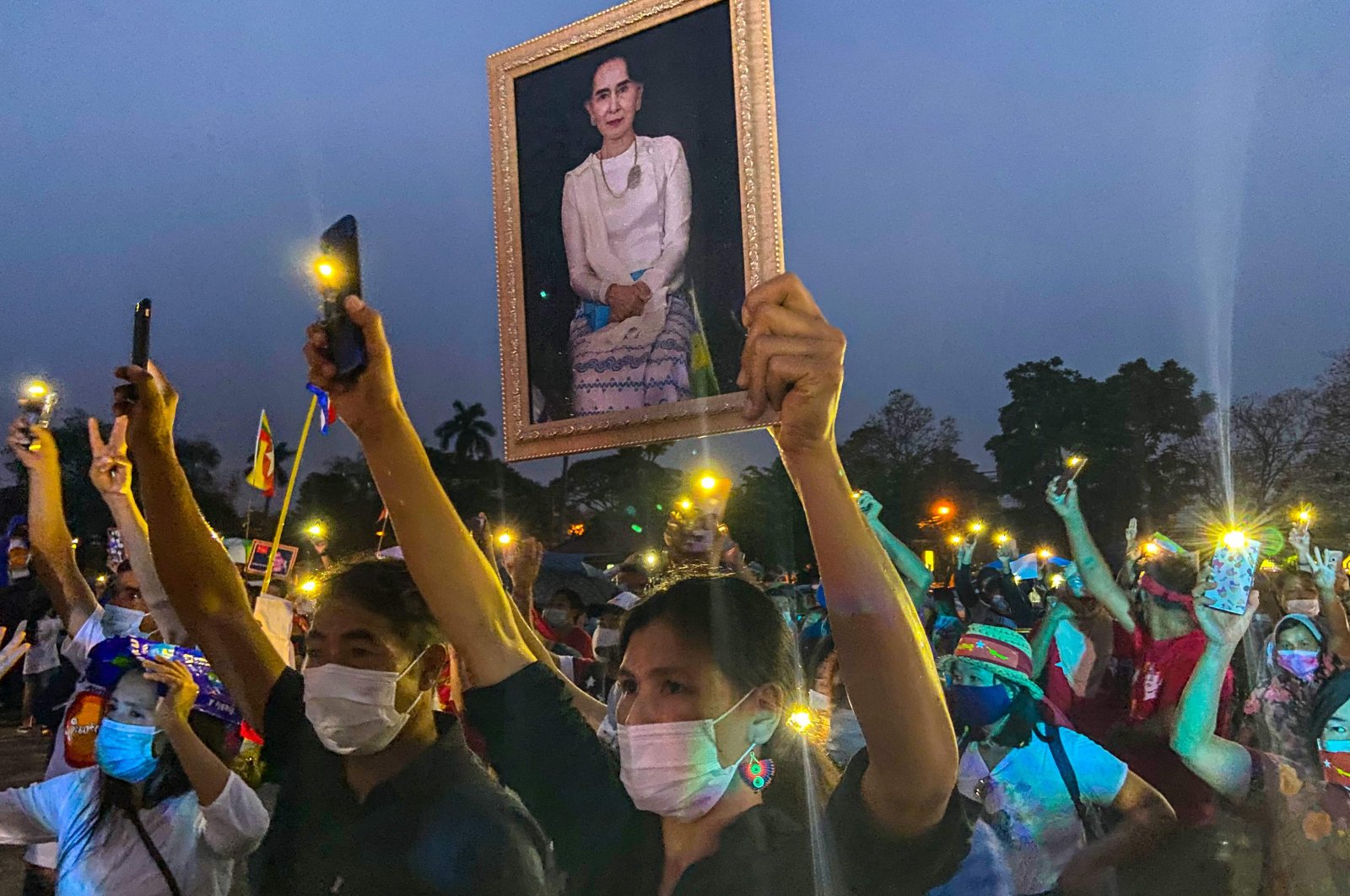 A Myanmar migrant living in Thailand holds a portrait of detained civilian leader Aung San Suu Kyi while others hold up their mobile phone lights during a night protest against the military coup in their homeland, Chiang Mai, Thailand, April 4, 2021. (AFP Photo)
by ASSOCIATED PRESS Apr 05, 2021 4:03 pm
RECOMMENDED

Myanmar's military targeted celebrities, including actors, musicians and social media influencers who showed support for anti-junta demonstrations as it released wanted lists in the state press and warned against cooperation with them, in the latest attempt to promote its agenda and simmer down protests against the coup.

The move follows weeks of escalating violence by security forces in breaking up street protests against the Feb. 1 coup that ousted the elected government of Aung San Suu Kyi. At least 564 protesters and bystanders have been killed since the takeover, according to the Assistance Association for Political Prisoners (AAPP), which monitors casualties and arrests.

The coup reversed the country’s gradual return to democracy after five decades of military rule. The lists published Sunday and Monday in the Global New Light of Myanmar newspaper include actors, actresses, musicians and social media influencers charged with violating Section 505(A) of the Penal Code for "spreading news to affect state stability.”

The penalty for the offense is up to three years' imprisonment. A chart filling most of a page lists 20 people, along with photos, hometowns and Facebook pages of each.

Several actors and directors were also charged in February, but the campaign against celebrity protest supporters was stepped up last week when army-controlled Myawaddy TV broadcast a wanted list. There are now at least 60 people on such lists.

May Toe Khine, who describes herself in her Twitter profile as "Full Time Burmese Actress / Part Time Fashion Designer Student,” tweeted after the TV announcement that her arrest warrant was "for simply doing my job as a civilian: using my platform to speak out the truth.”

"Please always pay attention to news in Myanmar until we win,” she wrote. What appears to be a leaked document from the Information Ministry advises broadcasters and production agencies of the cases against people in the fields of literature, film, theater arts, music and journalism.

It warns them not to publish or broadcast any of their work or face prosecution themselves. The April 4 document, which could not be authenticated by The Associated Press (AP), was reported by Khit Thit Media and widely circulated on social media.

Protests continued Monday around the country, but generally on a smaller scale than recently and often in ways intended to avoid confrontations. On Sunday, an "Easter Egg Strike” was held with eggs painted in support of the protests displayed in public places and online.

In Dawei, a city in southeastern Myanmar that is a stronghold of the protest movement, a short march was accompanied by a motorcycle procession. In Yangon, the country’s biggest city, a memorial march for the dead was held by mourners clad in black.

Separately, about 20 people gathered briefly on a city street and burned Chinese flags. Many protesters believe that Beijing backs the military regime with economic and political support, including the threat of a veto at the U.N. Security Council against international sanctions.