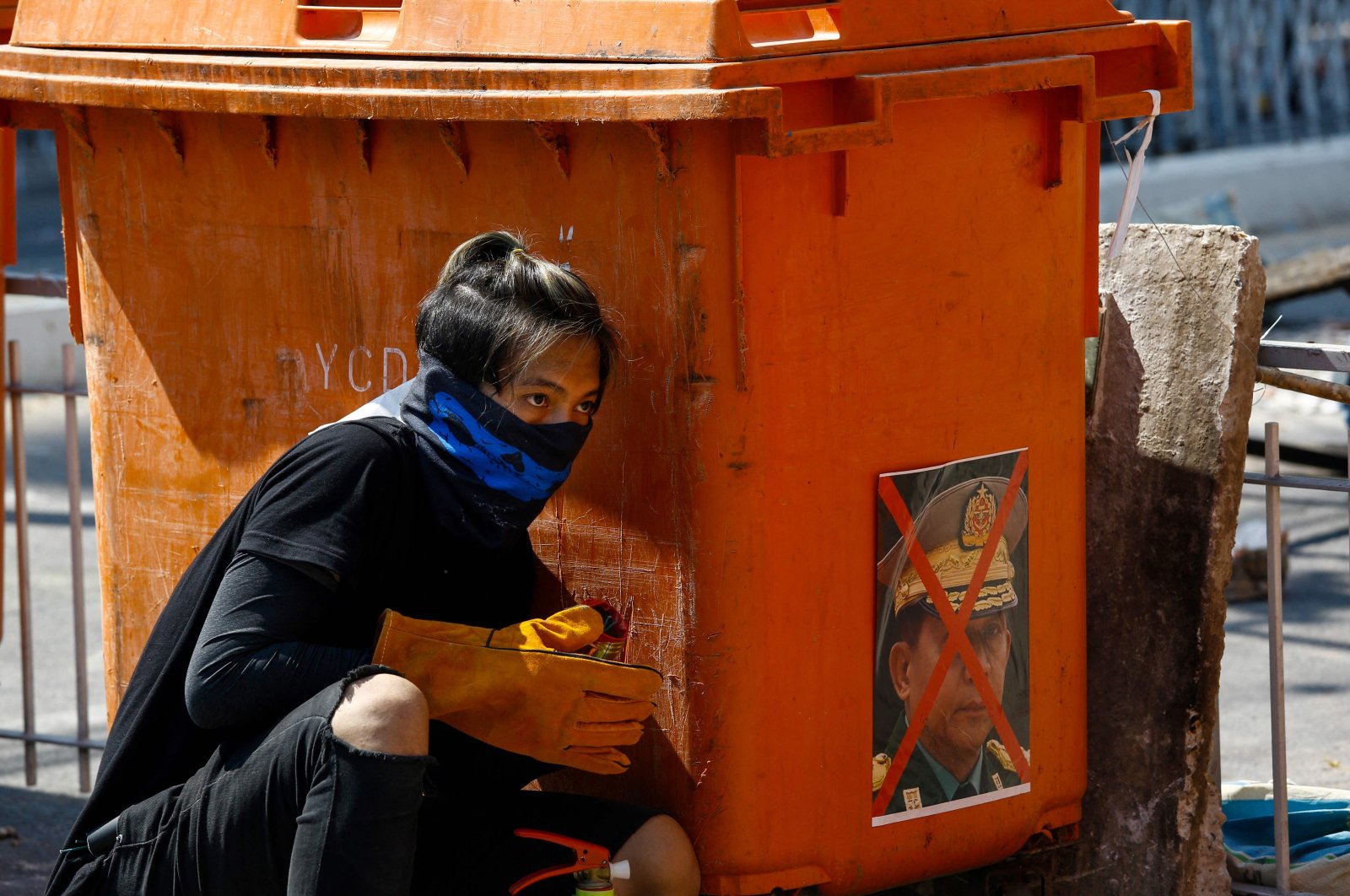 A protester takes shelter behind a rubbish bin adorned with an image of Myanmar armed forces chief Senior General Min Aung Hlaing during a demonstration against the military coup in Yangon, Myanmar, March 8, 2021. (AFP Photo)
by French Press Agency - AFP Mar 09, 2021 10:01 am
RECOMMENDED

Protests in Myanmar have been ongoing for the past month in the country ravaged by police and military brutality, and garment worker Khine Mar Nwe and her female co-workers have been on the frontlines since the beginning of the protests, risking their lives alongside men and women alike, to demand a return to democracy.

The 26-year-old mother used to spend her days hunched over a sewing machine in the commercial city of Yangon, making clothes for western fashion brands.

However, that all changed when the Myanmar military on Feb. 1 ousted civilian leader Aung San Suu Kyi and thus triggered mass protests against the new military junta.

Security forces have responded with an increasingly brutal crackdown on demonstrators, with more than 50 people killed and nearly 1,800 arrested. Despite the dangers, Khine Mar Nwe is determined to fight.

"We have equal responsibilities with men and we are here to protest shoulder to shoulder with men in the revolution," she told Agence France-Presse (AFP) on International Women's Day.

"We don't have any fears," she said, her long ponytail billowing out from a baseball cap, as she raised three fingers in the air, a symbol of resistance, at a rally in Yangon.

Khine Mar Nwe, chairperson of a popular garment factory workers association, says the oppressive conditions she worked under have taught her the importance of standing up for herself.

Her dogmatic leadership style has at times rankled her bosses who have threatened to lay her off.

Before the coup, Myanmar's garment industry was booming thanks to an influx of investments from international fashion brands.

Labels such as GAP, H&M, Primark and Adidas had shifted production to Myanmar factories, and locally-manufactured clothing, footwear and handbags were worth 3% of the country's gross domestic product (GDP).

However, with the military back in power, the fate of the industry's 700,000 workers is in doubt amid fears fashion labels could exit the country.

The unintended impact could be "malnutrition and sex-trafficking" for the mostly female workers, an industry insider told AFP.

Despite the uncertainty in her industry and the personal safety risks for demonstrators, Khine Mar Nwe says she's not worried and maintains women must be a part of Myanmar's democratic restoration.

The deaths by gunfire of two young women, Mya Thwate Thwate Khaing, 20, and Kyal Sin, 19, in recent weeks has deepened her commitment to the cause.

"I'm very proud of our women martyrs," she said. "We promise to fight (on) relentlessly on their behalf, as long as I'm alive."