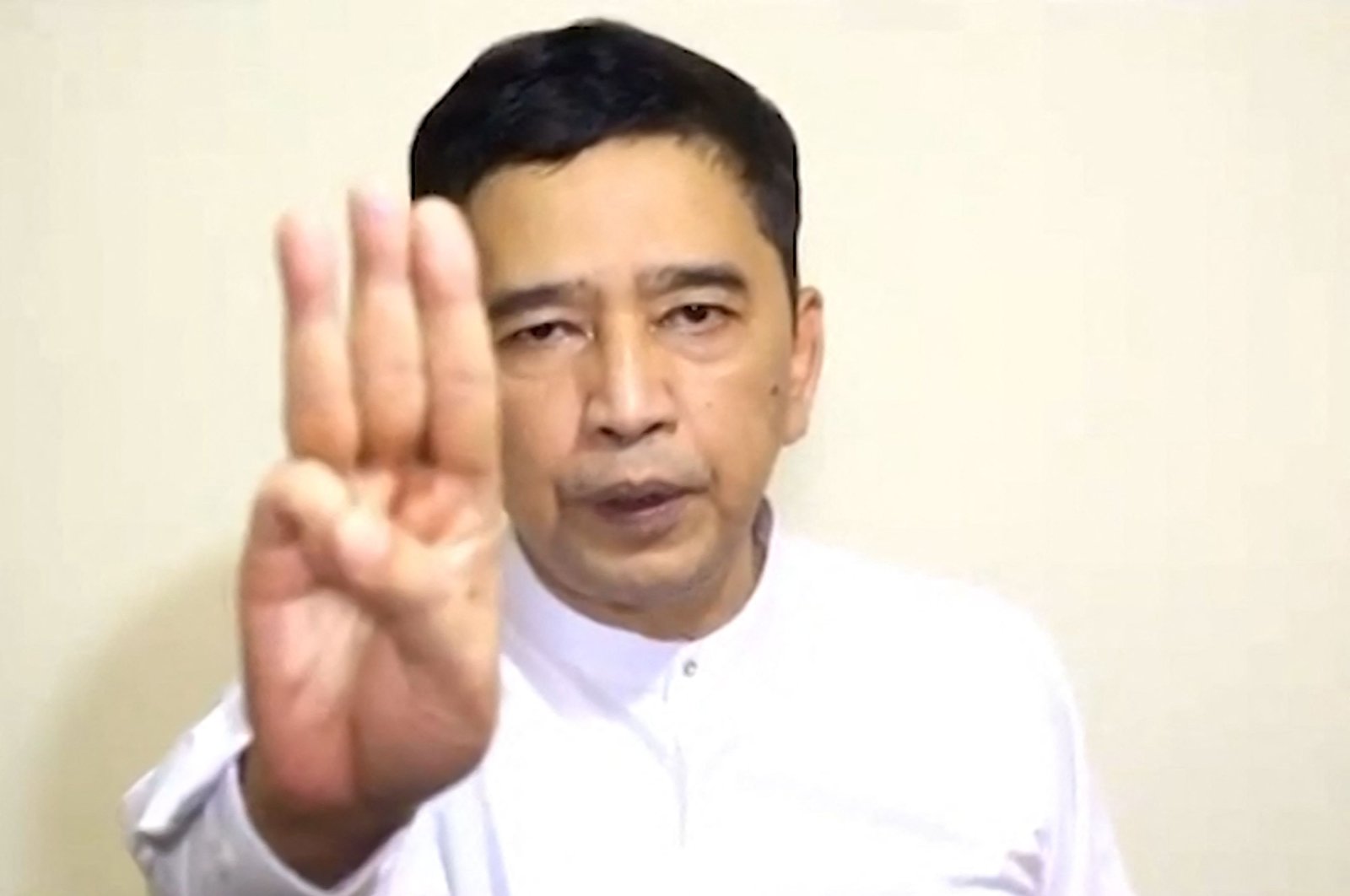 This screengrab from a video shows Min Ko Naing, prominent pro-democracy leader in an undisclosed location holding up the three finger salute as he announces the formation of a National Unity Government, April 16, 2021. (Committee for Representing Pyidaungsu Hluttaw - CRPH via AFP)
by REUTERS Apr 16, 2021 2:06 pm
RECOMMENDED

The committee representing Myanmar’s dismissed parliament announced on Friday the formation of a new “unity government” which includes ousted members of parliament, leaders of anti-coup protests and ethnic minorities.

Myanmar has been in violent turmoil since a Feb. 1 coup that ousted a civilian government led by democracy champion Aung San Suu Kyi, which had held power for five years and was starting its second term after a landslide election victory in November.

People have been taking to the streets day after day to demand the restoration of democracy, defying crackdowns by the security forces in which more than 700 people have been killed, according to a monitoring group.

At the same time, political leaders, including ousted members of parliament from Suu Kyi's party, have been trying to organize to show the country and the outside world that they and not the generals are the legitimate political authority.

"Please welcome the people's government," veteran democracy activist Min Ko Naing said in a 10-minute video address announcing the formation of the National Unity Government. While setting out few positions, Min Ko Naing said the will of the people was the unity government's priority, while acknowledging the scale of the task at hand. "We're trying to get this out from the roots so we have to sacrifice a lot," he said, referring to the junta.

A spokesperson for the junta could not be reached for comment. The generals justified their take-over with accusations of fraud in the November election won by Suu Kyi's party, though the election commission dismissed the objections.

One of the unity's government's primary objectives will be to win international support and recognition. Its minister of international cooperation, Dr. Sasa, told reporters the United States and Britain had recognized Venezuelan opposition leader Juan Guaido as the legitimate leader of that country.

"We are the democratically elected leaders of Myanmar," said Sasa, who goes by one name. "So if the free and democratic world rejects us that means they reject democracy." International pressure has also been building on the Myanmar military, particularly from Western governments that have imposed limited sanctions, though the generals have a long record of dismissing what they see as outside interference.

The unity government released a list of office holders including members of ethnic minorities and protest leaders, underlining the unity of purpose between the pro-democracy movement and autonomy-seeking minority communities, some of whom have battled the central government for decades. Sasa told Reuters in an interview the objective was to end violence, restore democracy and build a "federal democratic union."

The military, while playing lip service to the idea of federalism, has long seen itself as the core power holding the country together. Suu Kyi has been in detention since the coup with the only known communication with the outside world monitored video calls with her lawyers. A spokesperson for the democratic politicians said while they could not inform her of the creation of the unity government, he was sure she was aware of what was happening.

While the politicians were announcing the unity government, other opponents of military rule observed a "silent strike" staying home to mourn those killed or wearing black in small marches in half a dozen cities and towns, media reported.

"The most silent voice is the loudest," protest leader Ei Thinzar Maung posted on her Facebook page. Streets in the main city of Yangon were largely deserted, residents said. There were no immediate reports of violence but overnight, two people were shot and killed in the central town of Myingyan, Radio Free Asia reported.

The military has also been rounding up critics. Two prominent protest organizers were arrested on Thursday along with an actor and singer, both known for speaking out against the coup. In another show of defiance, a previously unknown group called the Ayeyarwaddy Federal Army said on Facebook it aimed to fight the military to restore an elected government and protect the people and it called for volunteers.

Unity government leaders said they intended to form a federal army and were in talks with ethnic minority forces. The turmoil and prospect of growing conflict has alarmed Myanmar's neighbors in Southeast Asia, who have been trying to encourage talks between the rival sides. Leaders of the 10-member Association of Southeast Asian Nations (ASEAN), which includes Myanmar, will meet in Indonesia on April 24 to discuss the situation, Thai and Indonesian media reported.

Junta leader Senior General Min Aung Hlaing was due to attend, a Thai broadcaster said, but the Jakarta Post said it had not been confirmed whether the summit would include representatives of the junta or the former government. Sasa said ASEAN should not invite "murderer-in-chief" Min Aung Hlaing.