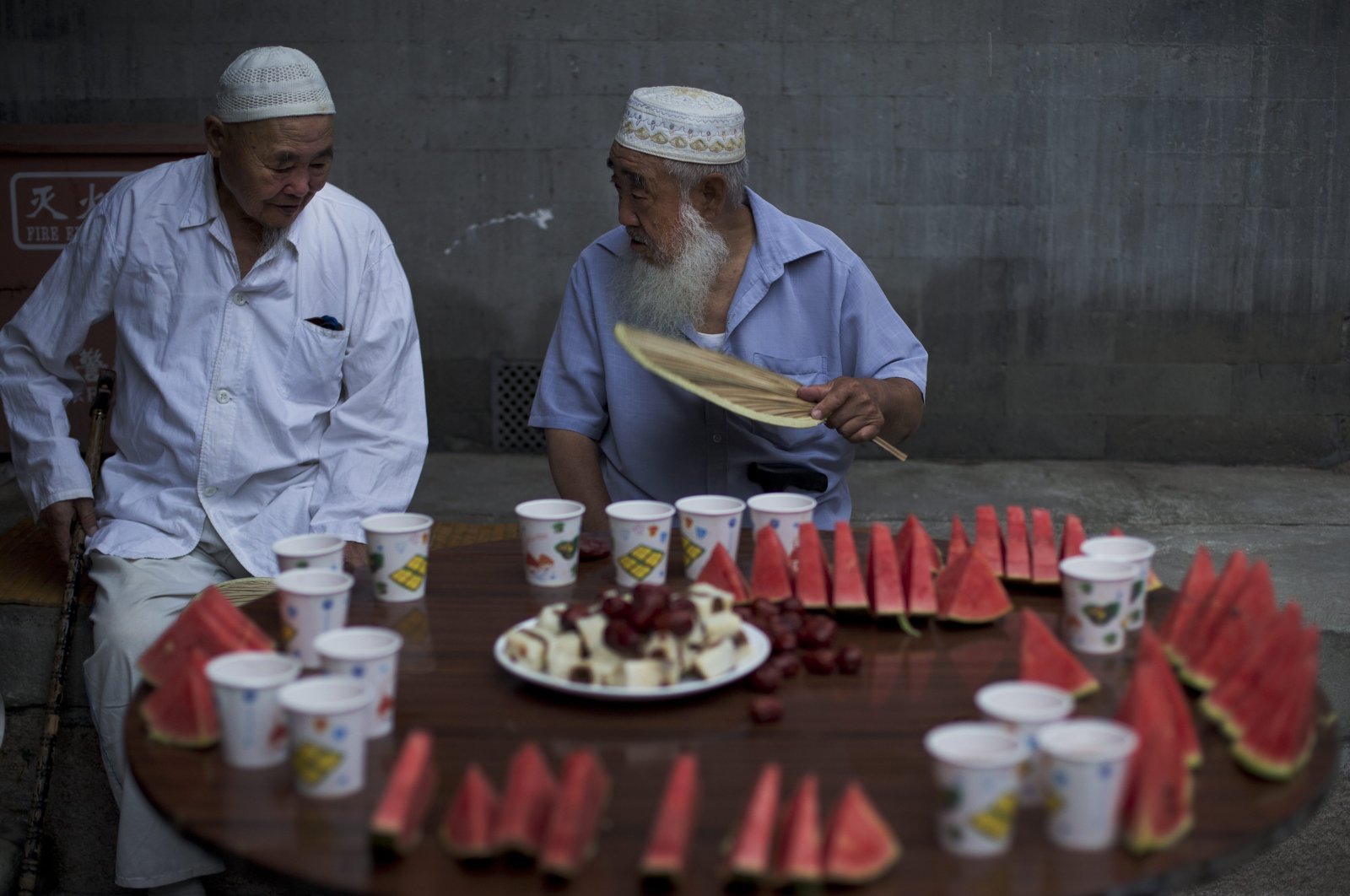 Chinese Muslim men chat as they wait for the time to break their fast during the Muslim holy month of Ramadan at Niujie Mosque, the oldest and largest mosque in Beijing, China, July 2, 2014. (AP Photo)
by Anadolu Agency Oct 16, 2020 5:10 pm
RECOMMENDED

A Chinese Muslim citizen intending to perform the annual hajj pilgrimage will have to fulfill the criterion of being "patriotic," new rules in China proclaim.

In the revised measures for the centrally administered Islamic Hajj Affairs, Article 12 of the new regulations issued last Monday list the "basic conditions" for hajj applicants.

The applicants are required to be "patriotic and law-abiding, with good conduct," the guidelines assert.

The new rules also bar those who have already performed the hajj in the past from applying again.

It also prevents the individual or personal pilgrimage. There are nearly 23 million Muslims in China.

"No other organization or individual may organize hajj activities," the order read.

China has been allowing "only official hajj" since 2005, prominent Uighur activist Nury Turkel, who serves on the U.S. Commission on International Religious Freedom, told the daily South China Morning Post.

The new rules, however, explain how a participant should be selected to be eligible for the Muslim pilgrimage.

Shih Chien-yu, who teaches Central Asian relations at Taiwan’s National Tsing Hua University, told Anadolu Agency (AA) that the order is an extension of the policy "sinicization of religion."

The Chinese state wants to fully control the religious life of people, without external influence due to globalization, whether Islam or Catholic, he explained.

"Sinicization has been mainly introduced by the (President Jinping) Xi administration ... the ultimate aim is to fully control the religious sector," said Shih, who until recently taught in Hong Kong but moved to Taipei after a controversial national security law was imposed in the semiautonomous state early this July.

Of the 42 articles divided into seven chapters of the new regulations, Shih said: "Articles 7-17 specify the qualifications for being a Chinese Muslim to join the hajj pilgrimage."

"This indicates that the Chinese state (local government or the authorized Islamic association, mainly composed of the state-trained imams) is in charge of reviewing and selecting if any Chinese Muslims hope to join the hajj," he added.

He feared that under the new circumstances, "it is difficult to say that state-dominated hajj would be fair."

"It can also lead to corruption when a Chinese Muslim would be chosen for the state-organized hajj," he added.

"Without being monitored by the state-organized tour guides, the privately organized hajj may encounter a very different experience, such as freely meeting up with Muslims from other countries, exchanging information and religious thoughts ... that is not welcome by the Chinese Communist Party,” Shih said.

The academic added that many Chinese Muslim youngsters went to Egypt and other Gulf countries to study Islam.

"After they finished their study and returned home, they started to elaborate Islam and the Quran in a different way from the version being permitted by the Chinese state," he explained. "And those went for hajj on their own and after returning home, they are much more respected in their hometowns. Their words enjoy more authority than the local state-trained imams."