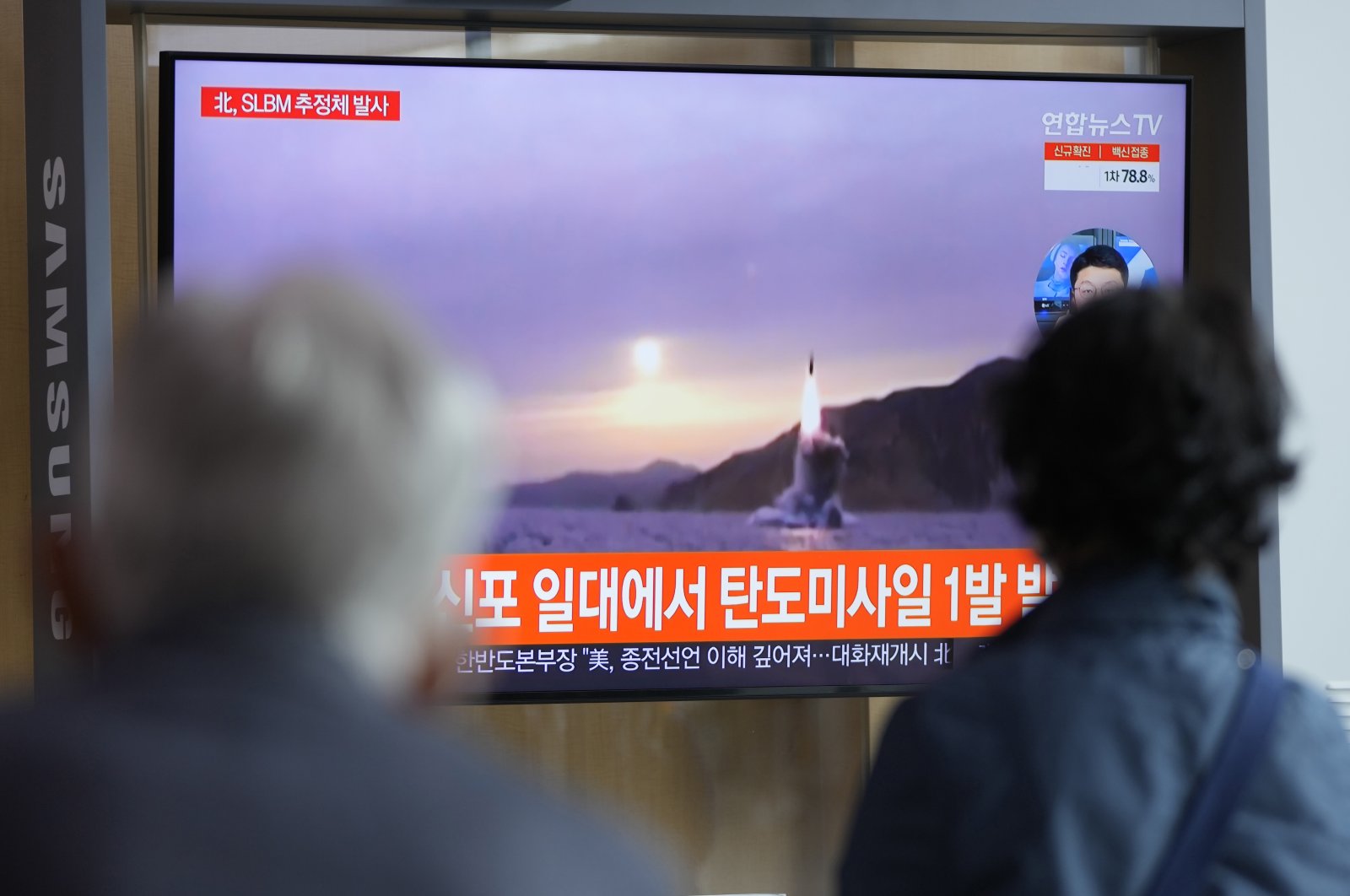 North Korea fired at least one ballistic missile into the sea on Tuesday in a continuation of its recent weapons tests hours after the U.S. reaffirmed its offer to resume diplomacy on the North’s nuclear weapons program.

The South’s Joint Chiefs of Staff said it detected one ballistic missile launched from an area around its eastern port of Sinpo and that the South Korean and U.S. militaries were closely analyzing the launch. But Japanese Defense Minister Nobuo Kishi said his country’s initial analysis suggested that the North fired two ballistic missiles.

The shipyard in Sinpo is a major defense industry hub where North Korea focuses its submarine production and the country has also used those facilities in recent years to develop ballistic weapons systems designed to be fired from submarines. The South Korean and Japanese militaries didn’t immediately say what kind of ballistic missile the North fired.

A test of a submarine-launched ballistic missile, which would be North Korea’s first since 2019, would be the country’s most significant military demonstration since President Joe Biden took office and underscore how it continues to expand its nuclear weapons capabilities amid a pause in diplomacy.

The North had rolled out at least two new SLBMs during military parades in 2020 and 2021. South Korean officials held a national security council meeting and expressed "deep regret” over the launch that came amid efforts to revive diplomacy. A strong South Korean response could anger North Korea, which has been accusing Seoul of hypocrisy for criticizing the North’s weapons tests while expanding its own conventional military capabilities.

Japan’s Deputy Chief Cabinet Secretary Yoshihiko Isozaki said Tokyo has lodged a "strong protest” to North Korea through "usual channels,” meaning their embassies in Beijing. Japan and North Korea have no diplomatic ties. Ending a monthslong lull in September, North Korea has been ramping up its weapons tests while making conditional peace offers to Seoul, reviving a pattern of pressuring South Korea to try to get what it wants from the United States.

"Pyongyang is rhetorically putting the burden for strained ties on Seoul and responsibility for restarting diplomacy on Washington,” said Leif-Eric Easley, a professor of international studies at Ewha Womans University in Seoul.

"North Korea is trying to coerce the world into accepting its violations of U.N. Security Council Resolutions as if they are normal acts of self-defense. This is part of the Kim regime’s efforts to achieve de facto international recognition as a nuclear power and receive concessions just for resuming contact.” Kim Dong-yub, a professor at the University of North Korean Studies in Seoul, said North Korea likely tested an SLBM given that the launch was made from Sinpo. He said the North may have tested an existing missile from a renovated submarine or a newly developed missile from an underwater launch platform.

The professor said the recent launches were apparently aimed at displaying the North’s military advancements as it tries to offset a lack of progress in economic development amid pandemic border closures and the U.S.-led sanctions. Within days, Biden’s special envoy for North Korea, Sung Kim, is scheduled to hold talks with U.S. allies in Seoul over the prospects of reviving talks with North Korea.

Nuclear negotiations between Washington and Pyongyang have stalled for more than two years over disagreements in exchanging the release of crippling U.S.-led sanctions against North Korea and the North’s denuclearization steps. North Korean leader Kim Jong Un has vowed to strengthen his nuclear deterrent and his government has so far rejected the Biden administration’s offers to restart dialogue without preconditions, saying that Washington must first abandon its "hostile policy,” a term the North mainly uses to refer to sanctions and U.S.-South Korea military exercises.

But while North Korea is apparently trying to use South Korea’s desire for inter-Korean engagement to extract concessions from Washington, analysts say Seoul has little wiggle room as the Biden administration is intent on keeping sanctions in place until the North makes concrete steps toward denuclearization.

"The U.S. continues to reach out to Pyongyang to restart dialogue. Our intent remains the same. We harbor no hostile intent toward the DPRK and we are open to meeting without preconditions,” Sung Kim told reporters on Monday, referring to the North’s official name, the Democratic People’s Republic of Korea.

"Even as we remain open to dialogue, we also have a responsibility to implement the U.N. Security Council resolutions addressing the DPRK,” he said. Last week, Kim Jong Un reviewed powerful missiles designed to launch nuclear strikes on the U.S. mainland during a military exhibition and vowed to build an "invincible” military to cope with what he called persistent U.S. hostility.

Earlier, Kim dismissed U.S. offers for resuming talks without preconditions as a "cunning” attempt to conceal its hostile policy on the North. The country has tested various weapons over the past month, including a new cruise missile that could potentially carry nuclear warheads, a rail-launched ballistic system, a developmental hypersonic missile and a new anti-aircraft missile. The test of the hypersonic missile on Sept. 28 came shortly before North Korean Ambassador Kim Song called for the Biden administration to permanently end joint military exercises with South Korea and the deployment of strategic military assets to the region in his speech to the U.N. General Assembly.

The North in recent weeks has also restored communication lines with the South and said it could take further steps to improve bilateral relations if Seoul abandons its "double-dealing attitude” and "hostile viewpoint” over its weapons development.