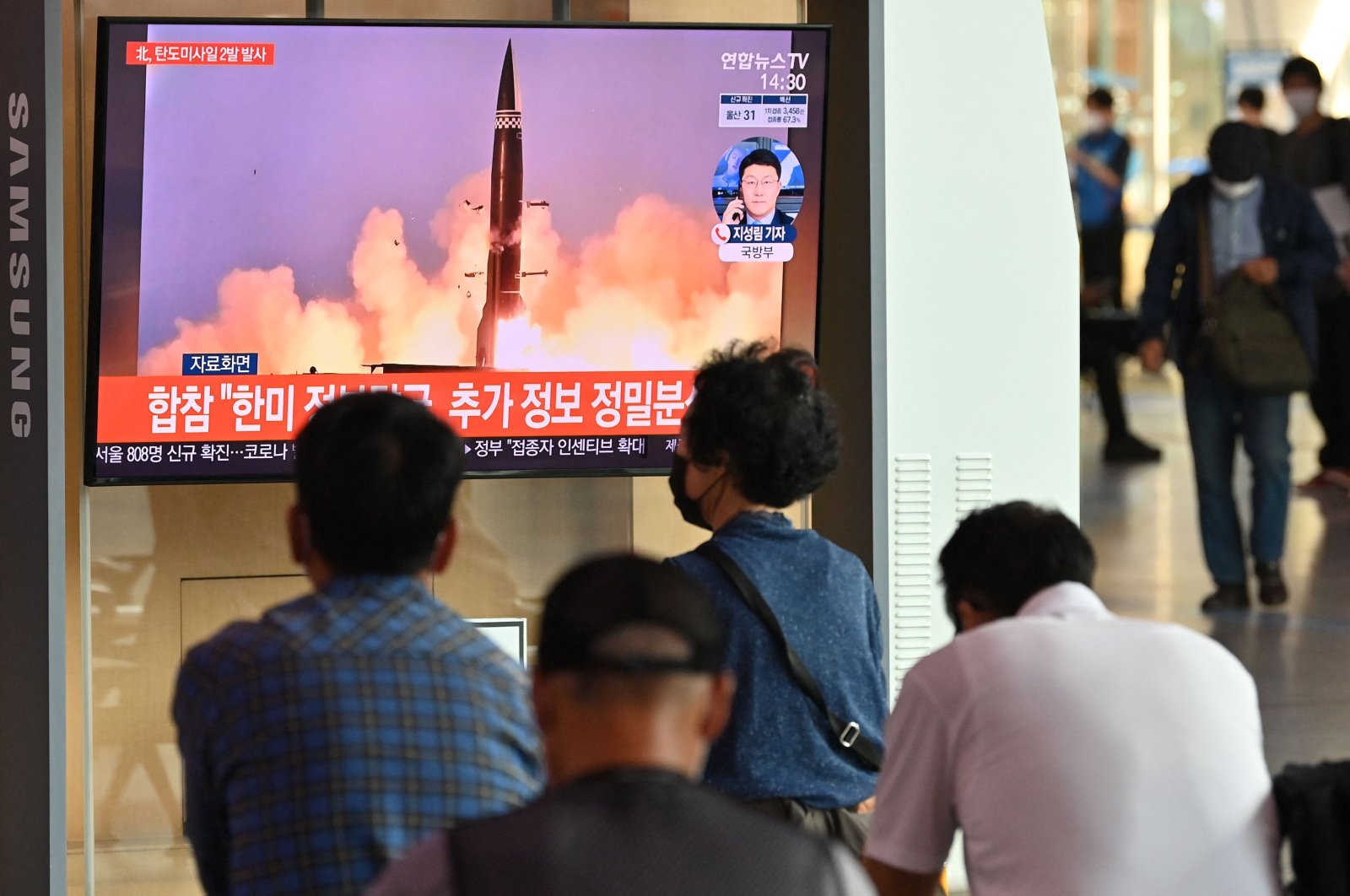 People watch a television news broadcast showing file footage of a North Korean missile test, at a railway station in Seoul on Sept. 15, 2021, after North Korea fired two ballistic missiles into the sea, according to the South's military. (AFP Photo)
by Agencies Sep 15, 2021 9:15 pm
RECOMMENDED

The United Nations Security Council (UNSC) will hold an emergency meeting on North Korea in the wake of the latest ballistic missile launches, diplomats said on Wednesday.

Earlier on the same day, a U.N. spokesperson said that they are concerned by the latest ballistic missile launches by North Korea.

North and South Korea conducted ballistic missile tests within hours of each other, displays of military power that raise tensions on the Korean Peninsula amid stalled talks over Pyongyang's nuclear program.

The South Korean Joint Chiefs of Staff (JCS) said at least two ballistic missiles were launched from the central part of North Korea and fired into the East Sea, also known as the Sea of Japan.

U.N. resolutions ban North Korea, a self-declared nuclear power, from any tests of ballistic missiles, which can carry nuclear warheads depending on their design.

Hours later, South Korea said one of its submarines had for the first time successfully fired a domestically built ballistic missile underwater.

South Korea is considered the first country to develop a submarine-launched ballistic missile (SLBM) without having nuclear weapons itself. By its own account, the successful test makes it the seventh country with potentially deployable SLBMs.

North Korea also boasts that it has the technology, but its previous claims of having conducted test launches from a submarine have been disputed by experts. Missiles fired from a submarine are more difficult to detect and destroy by an adversary than those launched from mobile launch pads or fixed silos on land.

According to South Korean President Moon Jae In's office, the SLBM was fired from a 3,000-ton-class submarine. The missile covered the intended distance and reached its target, it said.

Moon monitored the submarine missile test as it happened. He said afterward through a spokesperson that it had been planned long in advance but that nevertheless, his country's "improved missile performance can be a sure deterrent to North Korea's provocation."

Kim Yo Jong, the influential sister of North Korean ruler Kim Jong Un, accused Moon of carelessly using the word "provocation" in connection with the test.

If Moon joins the slander "of the other party, it will inevitably result in counteractions, which will surely lead to the complete destruction of relations," Kim was quoted as saying by state media.

Kim, however, left room for improvement in the relationship between the two states. The high-ranking party official described her country's missile test as a "normal action in self-defense."

According to the South Korean military, the North Korean missiles flew 800 kilometers (500 miles) toward the Sea of Japan after being launched inland.

Japan's Prime Minister Yoshihide Suga condemned the test, saying it threatened "the peace and security of Japan and the region."

The launch came two days after Pyongyang announced a successful test-fire of what it said was a new type of long-range cruise missile. It was the North's first missile test in six months.

North Korea called the missile a "strategic weapon of great significance," a term used to indicate that the new guided missiles have the potential to carry nuclear warheads, according to experts.

The U.S. and South Korea held their annual joint military exercises in August for nine days, which sparked heavy criticism from Pyongyang.

North Korea is subject to international sanctions due to its nuclear weapons program.

Under the U.N. Security Council resolutions, North Korea is banned from all ballistic missile activity.

At a party congress earlier this year, Kim announced his country would continue to pursue a path of nuclear deterrence with new weapons, including new intercontinental ballistic missiles.