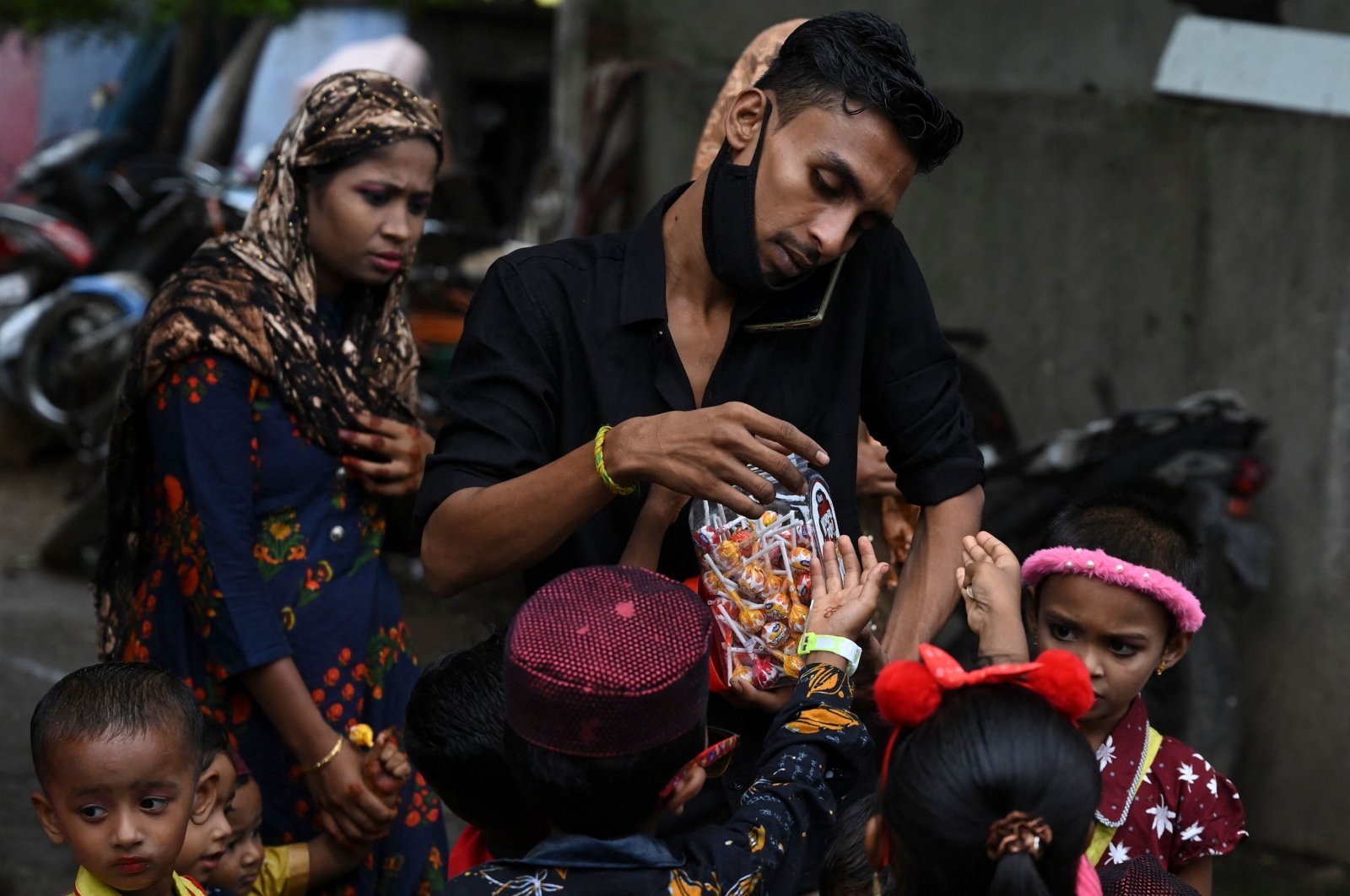 A Rohingya Muslim refugee (C) distributes candy to children during Eid al-Adha, or the Festival of Sacrifice, at a refugee camp on the outskirts of Chennai, India, on July 21, 2021. (AFP Photo)
by Anadolu Agency Jul 23, 2021 12:11 pm
RECOMMENDED

As thousands of stateless Rohingya refugees celebrate their first Qurban Bayram, the Muslim holiday also known as Eid al-Adha, on a remote island in Bangladesh, a sense of uncertainty hangs in the air over whether they will be peacefully repatriated to their home country of Myanmar.

Since last December, Bangladeshi authorities have relocated nearly 20,000 members of the persecuted ethnic minority group to the country’s distant island of Bhasan Char in the southern Bay of Bengal with promises of a better life and livelihoods.

The Rohingya, living in congested makeshift settlements in Bangladesh’s southern district of Cox’s Bazar, responded positively to the relocation to the island. The island is reportedly prone to natural disasters, but they are only supposed to stay for a brief interim period before their repatriation to their home country with safety and dignity.

"Since having fled to Bangladesh nearly four years ago, I had been living at a refugee camp in Cox’s Bazar in a very crammed and squalid environment with my tent made of tarpaulin sheets and bamboo sticks. But now I along with my family members have been living in a concrete house with a better environment,” Mohammad Rashid, a Rohingya on Bhasan Char, told Anadolu Agency (AA).

He said that for the first time during Eid al-Adha, or the Feast of the Sacrifice, they were served enough meat from sacrificed cows – one kilogram per person. "But nothing can be comparable to those days at my home in Myanmar’s Rakhine state when I slaughtered my own cow and celebrated the Eid with my dear and near ones,” he said, adding many of them were killed by the Myanmar army during the August 2017 military crackdown on Rohingya Muslims.

Rashid is one of the 750,000 Rohingya who, according to an Amnesty International report, fled Myanmar since Aug. 25, 2017, to Bangladesh, pushing the total number of stateless people in the world’s largest refugee camp in the South Asian country to above 1.2 million.

Expressing similar sentiments, Motiur Rahman, another Rohingya on the island, told AA that except for a mosquito outbreak and electricity shortage, living conditions on the island are far better than in the refugee camps in Cox’s Bazar.

"In my four years of living in Bangladesh, for the first time I have celebrated Eid al-Adha with a handsome amount of meat for my family as I once enjoyed in my home country,” Rahman said.

Animals such as cows and goats are sacrificed during the Eid al-Adha to commemorate the willingness of Prophet Ibrahim, or Abraham, to sacrifice his son at God’s command, before the last-minute divine substitute of a ram.

The sacrificed meat is then distributed to the needy. But in want of livelihood, Rahman has to stay home idle and wait for relief. "It is an uncertain life without any future. My kids are not getting a proper education. If it continues long, we will lose our existence in the future.”

‘No future on Bhasan Char’

Tensions have been steadily mounting among Rohingya refugees in Bangladesh as their dream of peaceful repatriation is being shattered again and again, amid new challenges such as the COVID-19 pandemic and the February military coup in Myanmar.

"It seems that we have to stay in Bangladesh for many years as the brutal military, which again have captured power illegally, are not at all interested in taking us back,” said Mohammad Ansar, a Rohingya youth on Bhasan Char. "Maybe Bangladesh will shelter us, international communities will provide us with necessary assistance, but we are being treated here as stateless people without refugee status. So, we have no future here.”

Ansar said Eid al-Adha this year is better than those in the previous three years.

"But the long-cherished issue of a safe and dignified repatriation is also under the most uncertainty this year. So nothing can bring peace to us. We want to establish our next generation on our own land.”

Hundreds of Rohingya children on the island celebrated Eid this year. There were no restrictions on their free movement during Eid and no pandemic cases have been reported on the island, although 26 Rohingya have died and 2,331 have been infected with the virus in the mainland camps. Groups of Rohingya children came out of their homes, wandered around and played with one another while wearing new clothes, as is tradition during the Muslim holiday.

The atmosphere was festive throughout the island during the Eid celebrations, with men busily slaughtering cows, women cooking and children playing.

Speaking to AA, Bangladesh’s Refugee Relief and Repatriation Commissioner Shah Rezwan Hayat said their staff had worked hard to make this Eid enjoyable for Rohingya, especially on the remote island.

"There are even families with 12 members each and we provided 12 kilograms of meat for these families. It was really a wonder for them,” Hayat said. On the growing frustration of Rohingya, he said that after Eid, agricultural activities would be extended and many Rohingya would have opportunities to earn a livelihood.

"We are also going to launch new fishing projects there, and I hope that a good number of Rohingya can be involved in those projects,” he said. He added that the Bangladeshi government is trying its best and working actively with various international platforms for the sustainable repatriation of Rohingya to their country of origin.