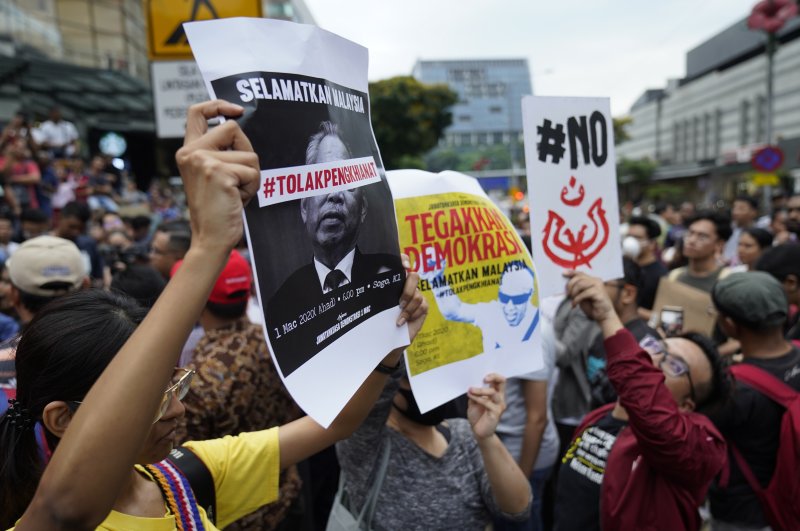 After the appointment of Muhyiddin Yassin as the new prime minister by the Malaysian king, public anger was growing at the ejection of the reformist alliance, with the hashtag "NotMyPM" trending on Twitter and more than 100,000 people signing a petition that said the move was a "betrayal" of the voters' choice at the 2018 poll.

Mahathir Mohamad called Sunday for an urgent sitting of Malaysia's Parliament to contest the appointment of a former ally as prime minister under a Malay-majority coalition that could further split the nation following the collapse of Mahathir's multiracial reformist alliance.

Slamming the move as illegal, Mahathir said he was “betrayed, mostly by Muhyiddin." Mahathir boycotted the swearing-in ceremony, but held a press conference an hour before, flanked by his supporters. "We are going to see a man who does not have majority support become prime minister," Mahathir said.

The Southeast Asian nation was plunged into turmoil after Mahathir's "Pact of Hope" alliance, which stormed to a historic victory in 2018, collapsed amid bitter infighting. He resigned last week as prime minister in protest of the plan that would bring the United Malays National Organisation (UMNO) back to power. After a week of political turmoil, the king said Saturday that he believed Muhyiddin had the majority support of lawmakers and named him the new leader. But Mahathir's camp has contested that assertion, saying the 94-year-old two-time prime minister has the backing of 114 lawmakers to return as premier for a third time, surpassing the 112 votes needed for a simple majority.

Mahathir and Muhyiddin were from the same Bersatu party and the former prime minister said he felt betrayed by a man he accused of plotting with UMNO to bring it back despite the corruption charges now facing some of its top officials. "Muhyiddin is willing to accept anything. He says politics is more important than principles," Mahathir said, vowing to call for a session of parliament to test whether Muhyiddin had a majority.

The political crisis began when a group of ruling coalition lawmakers joined forces with opposition parties in a bid to form a new government without Anwar and stop him from becoming premier. After the government fell, Mahathir was appointed interim premier and he and Anwar Ibrahim initially launched separate bids for power, reviving their decades-old rivalry. But as Muhyiddin's bid quickly gained support, Mahathir and Anwar reunited on Saturday in an effort to stop him, but the king announced Muhyiddin as the new leader of the country.