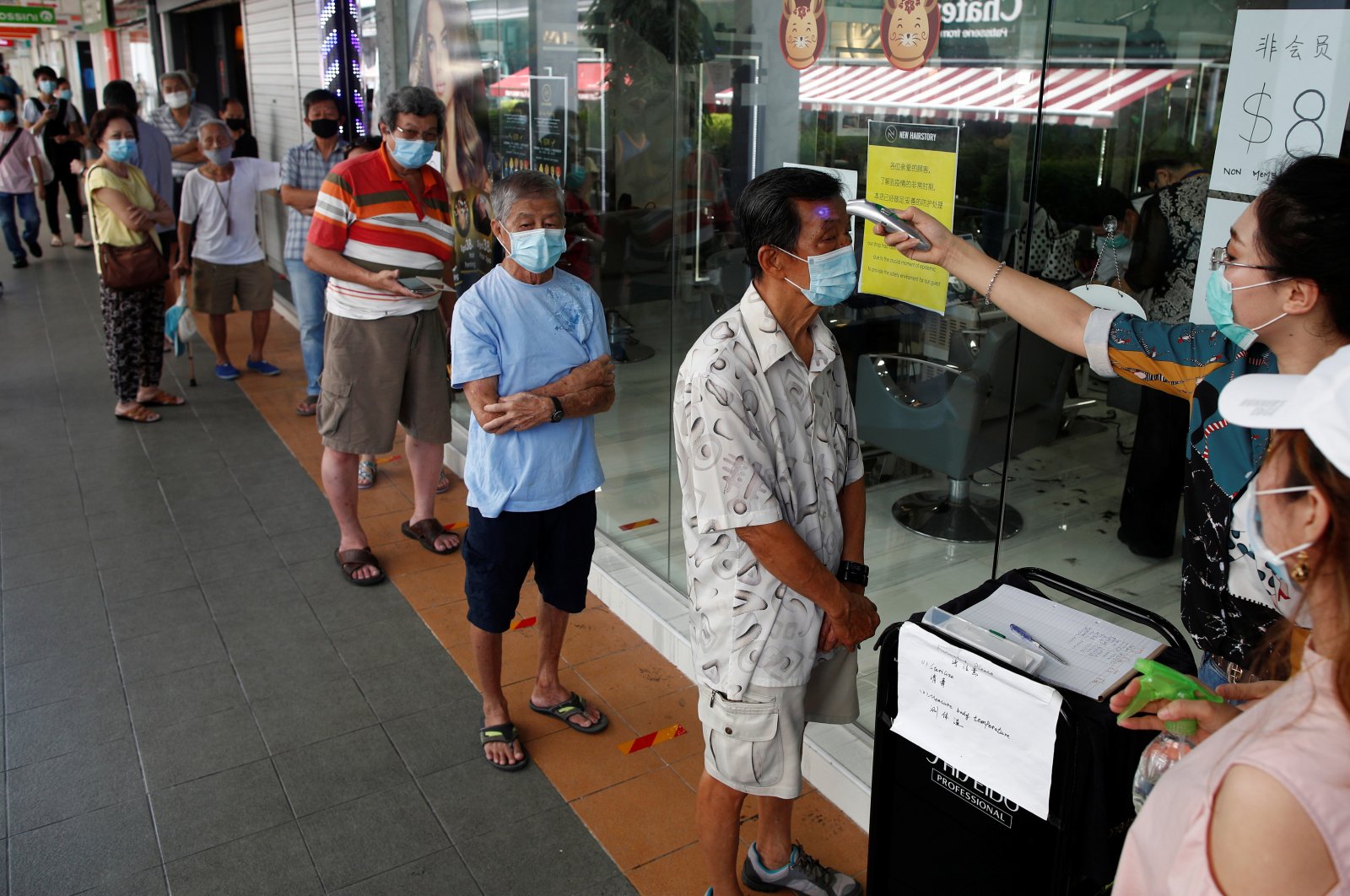 Customers queue up to have their temperature taken outside a hairdressing salon as they reopen for business amid the coronavirus disease (COVID-19) outbreak in Singapore May 12, 2020. (Reuters Photo)
by ASSOCIATED PRESS May 12, 2020 9:07 am
RECOMMENDED

Singaporeans were able to get a haircut at the barber or pop into their favorite bakery Tuesday as the government loosened restrictions, three weeks before a partial lockdown ends.

Despite an upsurge in cases due to an outbreak among foreign workers staying in crowded dormitories, the government says transmission in the local community has dropped and plans a phased reopening of the economy.

Barbers and hairdressers, food manufacturers and outlets, as well as laundry shops, are among selected businesses that can open doors with strict health measures Tuesday after five weeks of shutdown. Barbers are opened by appointment basis only and notices outside shops call for face masks before entry.

Officials reminded citizens not to rush out or loiter outside to keep the city safe.

"It's a bit messy because suddenly we received the notice in such a very short notice.... but we’re trying to make it work out with all the safety measures,” said Chow Siew Yong, owner of a Chinese medicine hall.

Singapore recorded 23,336 infections, the highest in Asia after China, India and Pakistan. But it has a low fatality rate of 21 deaths. About 90% of cases are linked to foreign workers' dorms, which have all remained locked down as testing continues.

President Rodrigo Duterte said the lockdown that has restricted millions of Filipinos to their homes will be eased, but he warned that people who return to work must follow safeguards to avoid more deaths and illnesses. The two-month lockdown on Luzon island, the country's most populous region, was supposed to last until May 15. A presidential spokesman was to give details on the easing of the lockdown later.

"Don’t gamble with COVID,” Duterte said. The Philippines has confirmed 11,000 infections, including 726 deaths.

India is set to run limited trains as the country looks at easing its nearly seven-week lockdown. Special trains will depart Tuesday from select cities and run to full capacity. Passengers will be allowed to enter stations only if they are asymptomatic and clear thermal screening; they must maintain social distancing on board and will be given hand sanitizers on entry and exit. India’s rail, road and air services were suspended in late March as part of a nationwide lockdown.

China has one new case

China reported just one new coronavirus case, as the government presses ahead with reopening measures. Some students in Beijing have returned, and Shanghai Disneyland and the ancient Forbidden City have reopened to limited visitors with social distancing maintained.

South Korea has reported 27 new cases as health workers work to test thousands of people who visited nightspots in Seoul after detecting dozens of infections linked to clubgoers. Figures released by South Korea’s Centers for Disease Control and Prevention brought national figures to 10,936 cases and 258 deaths.

Clubs in the capital region have been closed again after the outbreak, and the reopening of schools was pushed to May 20. Seoul Mayor Park Won-soon said more than 7,200 people have been tested since the city requested recent visitors to the Itaewon entertainment district get COVID-19 tests.

Australia’s treasurer said the country faces a "sobering” economic outlook and will have its largest-ever deficit when a revised budget is released in October. The budget due to be released Tuesday has been delayed so the government can assess the economic costs of the virus.

New South Wales, Australia's most populous state, recorded no new cases of coronavirus for the first time since health authorities began documenting them in February. Australia has recorded nearly 7,000 cases and 97 deaths. Its restrictions are to be eased in the coming months with social distancing and hygiene measures retained.

No new cases in New Zealand

New Zealand reported no new cases of the virus Tuesday, the third day since early last week it has not added cases, as it prepared to relax many of its restrictions. Most businesses, including retail stores, malls, restaurants and gyms, can reopen from Thursday and schools will reopen Monday. Bars can start serving customers again from May 21. Social distancing rules will still apply and social gatherings will be limited to 10 people.