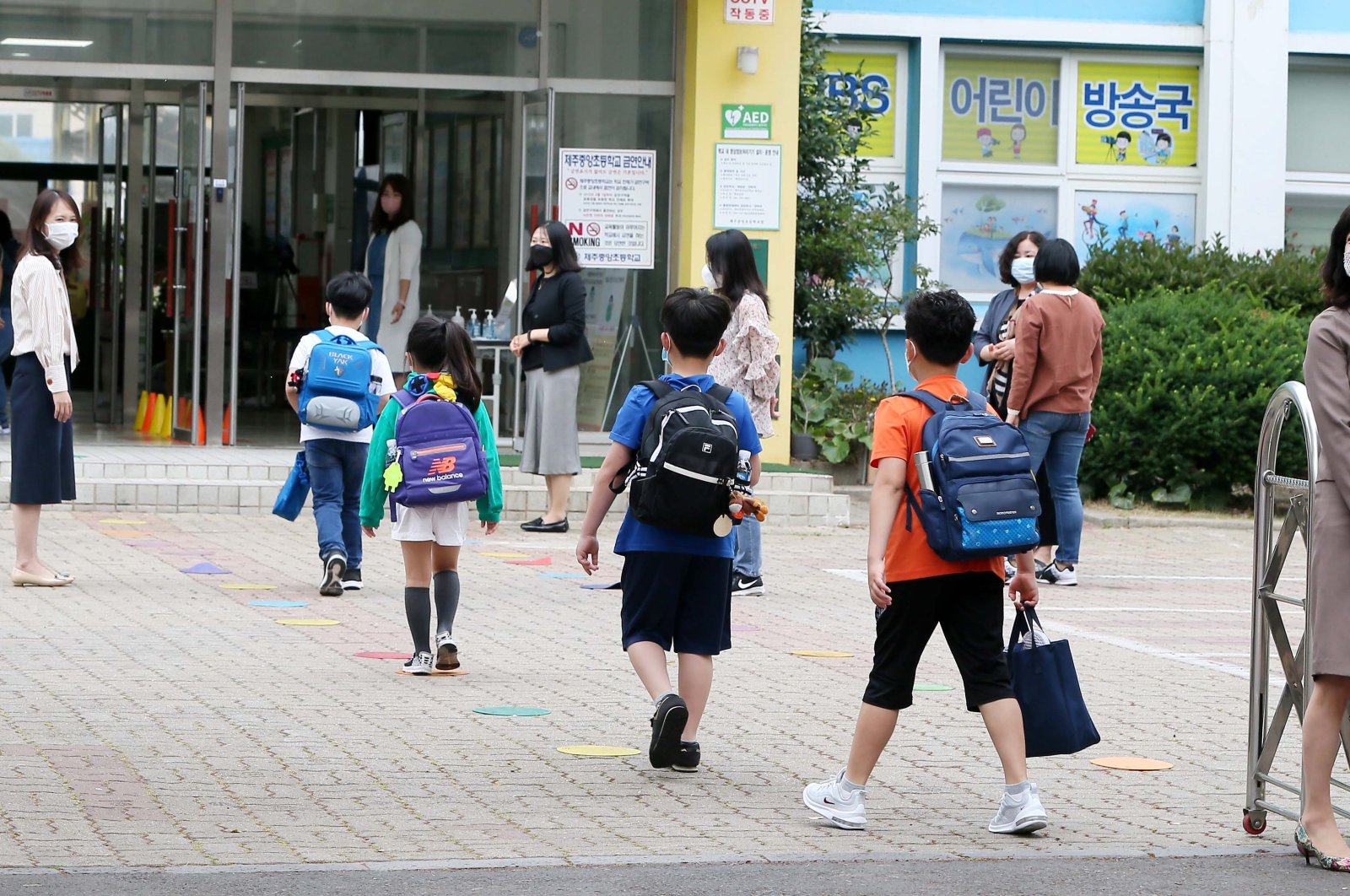 Students arrive at school while keeping distance from each other at Joongang Elementary School on Jeju Island, South Korea, 03 June 2020. (EPA Photo)
by ASSOCIATED PRESS Jun 03, 2020 9:30 am
RECOMMENDED

South Korea on Wednesday reported 49 new cases of COVID-19, continuing a weekslong resurgence of the virus as the government defended its decision to reopen schools despite health risks.

The figures announced by the Korea Centers for Disease Control and Prevention on brought national totals to 11,590 cases and 273 deaths. All but one of the new cases were reported from the densely populated Seoul metropolitan area, where hundreds of infections have been linked to entertainment venues, church gatherings and a massive e-commerce warehouse.

Mayors and governors in the greater capital area have shut thousands of nightclubs, hostess bars, karaoke rooms, churches and wedding halls to slow the spread of the virus.

Some entertainment venues in Seoul, Incheon and Daejeon began collecting the personal details of their customers through smartphone QR codes this week so they could be located easily when needed, a requirement that will be expanded nationwide on June 10.

Despite the spike in transmissions, the government has been pushing ahead with a phased reopening of schools, which began with high-school seniors on May 20.

The Education Ministry couldn’t immediately confirm how many schools had to delay their openings because of virus concerns. But it said that 519 schools so far have been forced to go back to remote learning.

Keeping schools closed would have been a difficult political decision in a country where teenagers are thrown into hyper-competitive school environments because graduating from elite universities is seen as crucial to career prospects. But some critics say that would have been the right decision for public health interests and that officials are risking the safety of children and their families.

Prime Minister Chung Sye-kyun said that the country kept schools open even during the 1950-53 Korean War.

"I believe that we cannot fail the dreams and future of our children because of the current difficulties,” Chung said during a virus meeting.

In other developments in the Asia-Pacific region:

The central Chinese city of Wuhan, where the global pandemic originated, says it has succeeded in carrying out nucleic acid tests on virtually all of its 11 million people - excluding children under age 6. The tests were carried out over during the second half of May, adding to the more than 1 million people tested previously. "This is extraordinarily rare anywhere in the world," National Health Commission expert Li Lanjuan told reporters. "It not only shows confidence and determination in the fight against the epidemic in Wuhan but has also provided reference to other cities for their prevention.” No confirmed cases of COVID-19 were found, although 300 people tested positive for the virus without showing symptoms and have been placed in isolation.

China on Wednesday reported four new confirmed coronavirus cases, one from abroad and three added retroactively after nucleic acid tests returned positive results. However, the country’s overall count fell by one to 83,021 after five other cases were eliminated retroactively. No new deaths were reported, leaving the total at 4,634 since the virus was first detected in the central Chinese city of Wuhan late last year. Just 73 remain in treatment and another 360 people are in isolation and being monitored for either testing positive but showing no symptoms or for being suspected of having caught the virus.

Australia’s government says the pandemic has pushed its economy into recession for the first time in 29 years. Federal Treasurer Josh Frydenberg said the current June quarter will be the second in a row in which the Australian economy has shrunk. Data released on Wednesday for the March quarter show a 0.3% contraction since the three months through December due to destructive wildfires and the early stages of the coronavirus lockdown. Frydenberg said the Treasury Department had advised the June quarter result will be worse. "In response to this once-in-100-year global event, we put in place a series of health measures that have hit the economy hard,” Frydenberg said. Australia has recorded 7,221 coronavirus cases with 26 people still in hospitals. There have been 102 fatalities.