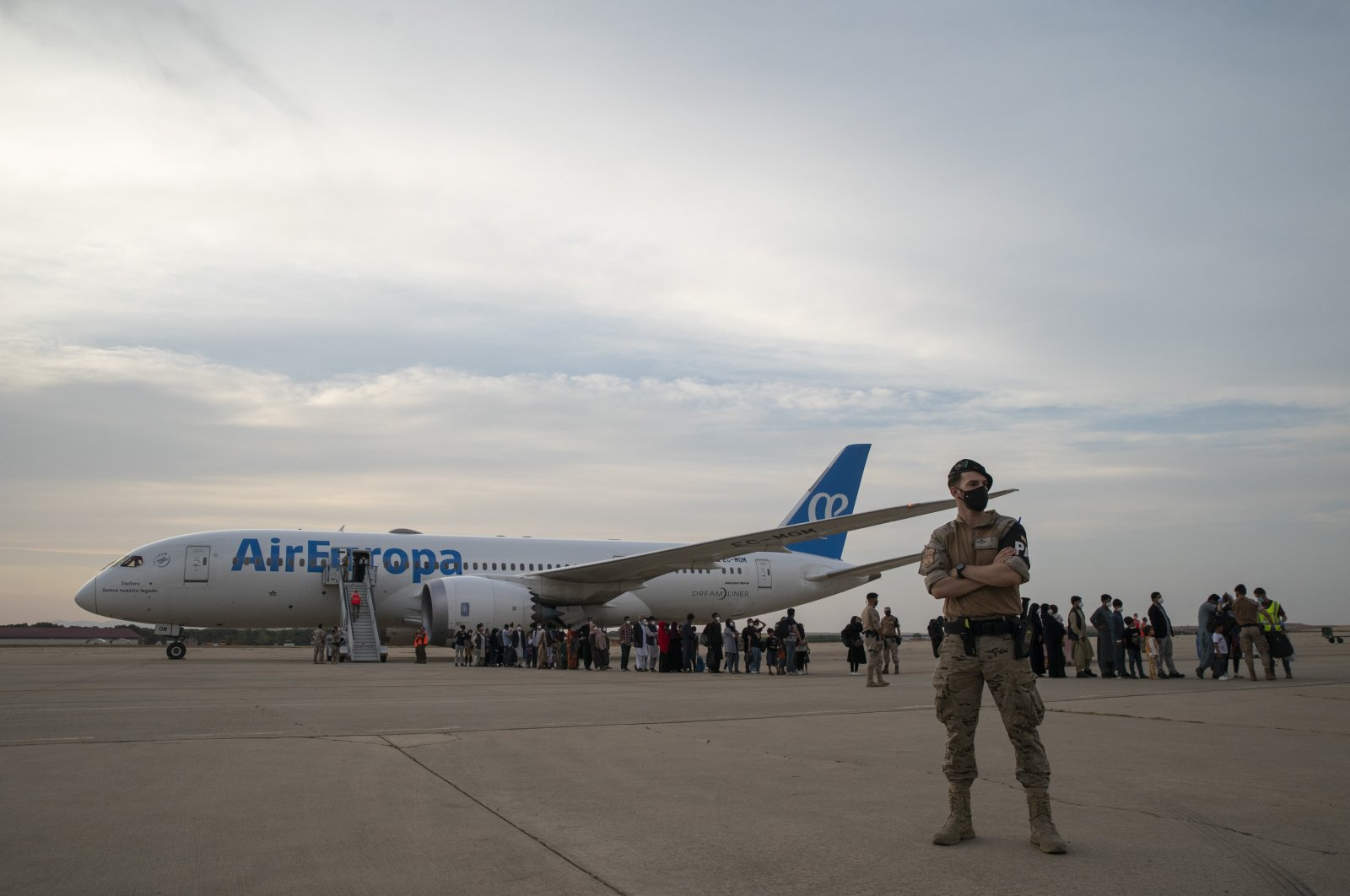 Afghans who were transported from Afghanistan, walk after disembarking a plane, at the Torrejon military base as part of the evacuation process in Madrid, Spain, Aug. 24, 2021. (AP Photo)
by Agencies Aug 27, 2021 10:07 am
RECOMMENDED

The United Kingdom and Spain were set to end their evacuations from Afghanistan on Friday, as Afghanistan reeled from the bombings near the Kabul Hamid Karzai International Airport.

The Spanish government on Friday said it has concluded its evacuation of personnel from Afghanistan and the last evacuees are expected to land at the Torrejon military airbase near Madrid later in the day.

Two military planes carrying the last 81 Spaniards out of Kabul arrived in Dubai early Friday morning, the government said in a statement. The planes were also carrying four Portuguese soldiers and 83 Afghans who had worked with NATO countries.

"These two flights conclude the evacuation of Spanish personnel and Afghan allies and their families," the statement read.

Over the course of its rescue mission, Spain evacuated 1,898 Afghans who had worked with Western countries, the United Nations or the European Union. Earlier, Madrid warned that it will leave behind some Afghans who served alongside its troops in Afghanistan because of the "dramatic" situation on the ground.

Meanwhile, U.K. Defense Secretary Ben Wallace said Friday that Britain plans to complete its evacuations out of Afghanistan "in a matter of hours."

"We will process those people that we have brought with us, the 1,000 people approximately inside the airfield now," Wallace told Sky News. "And we will seek a way to continue to find a few people in the crowd, where we can, but overall the main processing has now closed and we have a matter of hours."

Wallace said that the U.K. had "closed the Baron Hotel," where those wanting to fly to Britain had gathered. It also closed the processing center for asylum-seekers and shut Abbey Gate, one of the points of access to Kabul airport and one of the areas targeted in the twin suicide bombings on Thursday.

Nearly 14,000 British citizens and Afghans had been rescued as part of the U.K. evacuations since mid-August, Wallace said, but added: "The sad fact is not every single one will get out."

Twin suicide bombs ripped through crowds outside Kabul airport Thursday, killing at least 90 people including 13 U.S. troops and deepening panic in the final days of an already frenzied evacuation effort from Taliban-controlled Afghanistan.

The bombings, claimed by Daesh terrorist group, left scenes of carnage outside the airport where thousands of Afghans desperate to flee their country had massed.

Wallace said that the "horrendous" attacks "didn't hasten our departure."

"We closed the Baron Hotel almost exactly on schedule. The threat is obviously going to grow the closer we get to leaving," he added.