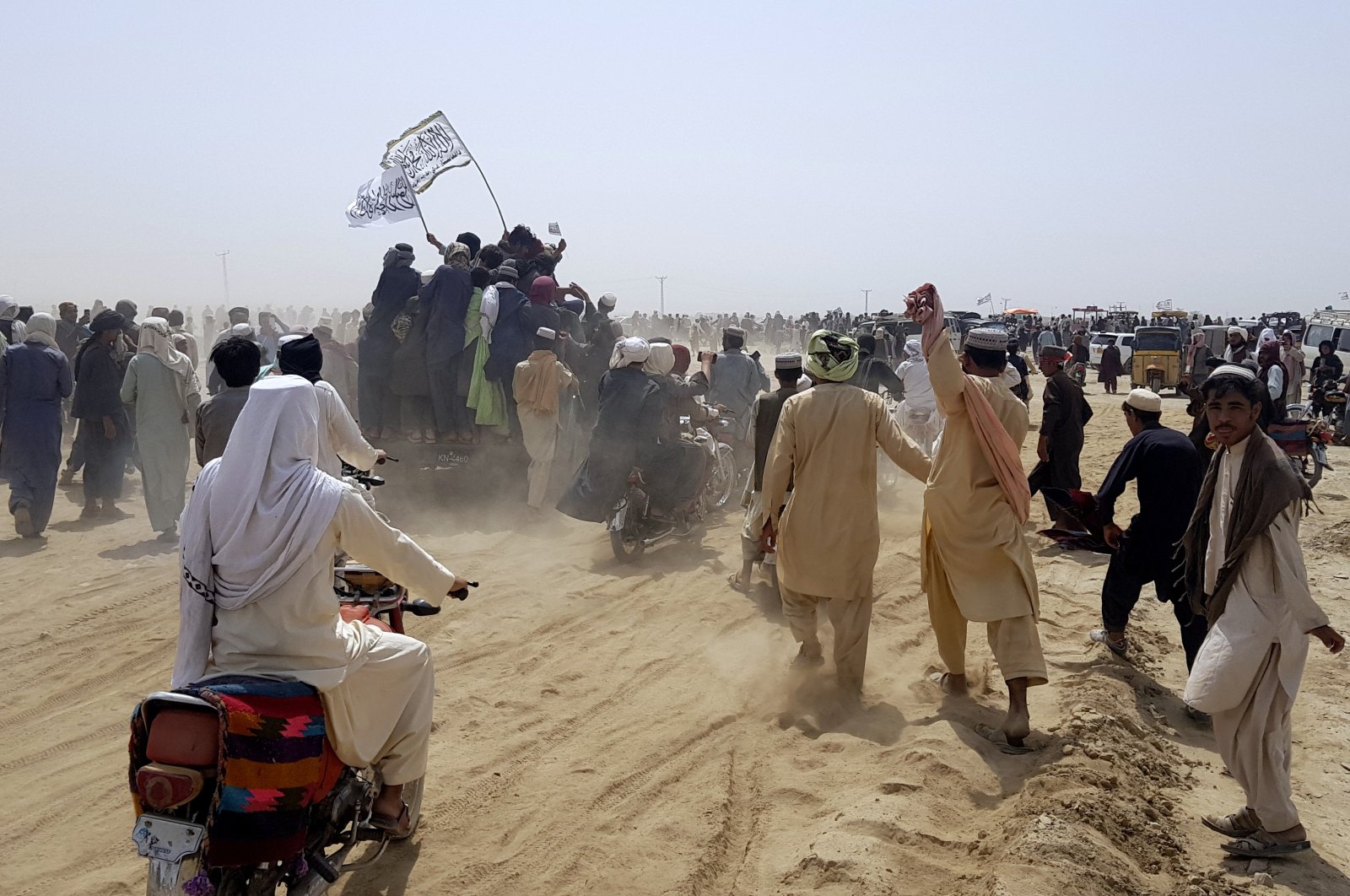 The Taliban on Thursday proposed a three-month cease-fire in exchange for the release of 7,000 prisoners as well as the removal the group's leaders from the United Nations blacklist as it continues a sweeping offensive across the country.

A member of the Afghan government negotiation team, Nader Nadery described the request as a "big demand."

The announcement came as Pakistan guards used tear gas Thursday to disperse hundreds of people who tried to breach a border crossing into Afghanistan, officials said. The frontier was closed a day earlier by Pakistan after the Taliban seized the Afghan side in Spin Boldak district, continuing sweeping gains made by the militants since foreign forces stepped up their withdrawal from Afghanistan.

"An unruly mob of about 400 people tried to cross the gate forcefully. They threw stones, which forced us to use tear gas," said a security official at the southwest Chaman border on the Pakistan side, who asked not to be named. He said around 1,500 people had gathered at the border, waiting to cross since Wednesday.

"We had to baton charge because people were getting unruly," said a second border official, who also did not want to be named. Jumadad Khan, a senior government official in Chaman, said the situation was now "under control."

An Afghan Taliban source told Agency France-Presse (AFP) that hundreds of people had also gathered on the Afghan side, hoping to get into Pakistan.

"We are talking to Pakistani authorities. A formal meeting to open the border is scheduled for today, and hopefully, it will open in a day or two," he said.

The crossing provides direct access to Pakistan's Balochistan province – where the Taliban's top leadership has been based for decades – along with an unknown number of reserve fighters who regularly enter Afghanistan to help bolster their ranks.

A major highway leading from the border connects to Pakistan's commercial capital Karachi and its sprawling port on the Arabian Sea, which is considered a linchpin for Afghanistan's billion-dollar heroin trade that has provided a crucial source of revenue for the Taliban's war chest over the years.

Spin Boldak was the latest in a string of border crossings and dry ports seized by the insurgents in recent weeks as they look to choke off revenues much-needed by Kabul while also filling their own coffers.

Afghanistan's interior ministry has denied the Taliban have taken the area even as social media was flooded with pictures of insurgent fighters relaxing in the frontier town. Hours after the crossing fell, an AFP reporter on the Pakistani side saw around 150 Taliban fighters riding on motorcycles, waving insurgent flags and demanding to be allowed to cross into Afghanistan.

According to Reuters, Afghan security forces have retaken control of border crossing with Pakistan, a senior Afghan government official said on Thursday, but the Taliban dismissed that saying they still held the town. Afghanistan retook the area's main market, the customs department and other government installations in the border town a few hours later on Wednesday, a senior government official in the southern province of Kandahar, where the crossing is located, told Reuters.

Government forces, who had initially fallen back to minimize civilian and security personnel losses, were conducting clearing operations, the official said. He warned that the threat remained high as Taliban fighters outnumbered Afghan security forces in the area. But Taliban spokesperson Zabihullah Mujahid said his forces still held the border post.

"It is merely propaganda and a baseless claim by the Kabul administration," he told Reuters.

Pakistan, worried about a spillover of fighting, had shut its side of the border at the second busiest border crossing on the main commercial artery between the second Afghan city of Kandahar and Pakistani ports.

Clashes between the Taliban and government forces have intensified as U.S.-led international forces have been withdrawing and the Taliban have captured several districts and other border crossings in the north and west.

With security deteriorating sharply, diplomatic efforts have been focusing on pushing the rival Afghan sides to make progress towards a cease-fire at talks that they have been holding intermittently in Qatar.

President Ashraf Ghani was due to meet regional leaders in Uzbekistan on Thursday as the deteriorating security raises fears of a new Afghan refugee crisis and Pakistan said it would host a conference of senior Afghan leaders in a bid to find solutions.

Pakistan was for years accused of backing the Taliban with the aim of blocking the influence of its old rival India in Afghanistan, which Pakistan has denied.

"Important Afghan leaders, including Hamid Karzai, have been invited," Pakistan's Information Minister Fawad Chaudhry, said on Twitter, referring to the former Afghan president who remains an influential figure in Kabul.

Chaudhry said Pakistani Prime Minister Imran Khan spoke to Karzai late on Wednesday. He did not elaborate but told Reuters Taliban leaders would not be attending as Pakistan was holding separate talks with them.

Karzai and some top Afghan political leaders are expected to fly to Qatar this weekend for talks with members of the Taliban who have an office in the capital, Doha.

The Taliban ruled Afghanistan from 1996 until their ouster in 2001, weeks after the Sept. 11, 2001, attacks on the United States. They have since been fighting to expel foreign forces and topple the Western-backed government in Kabul.