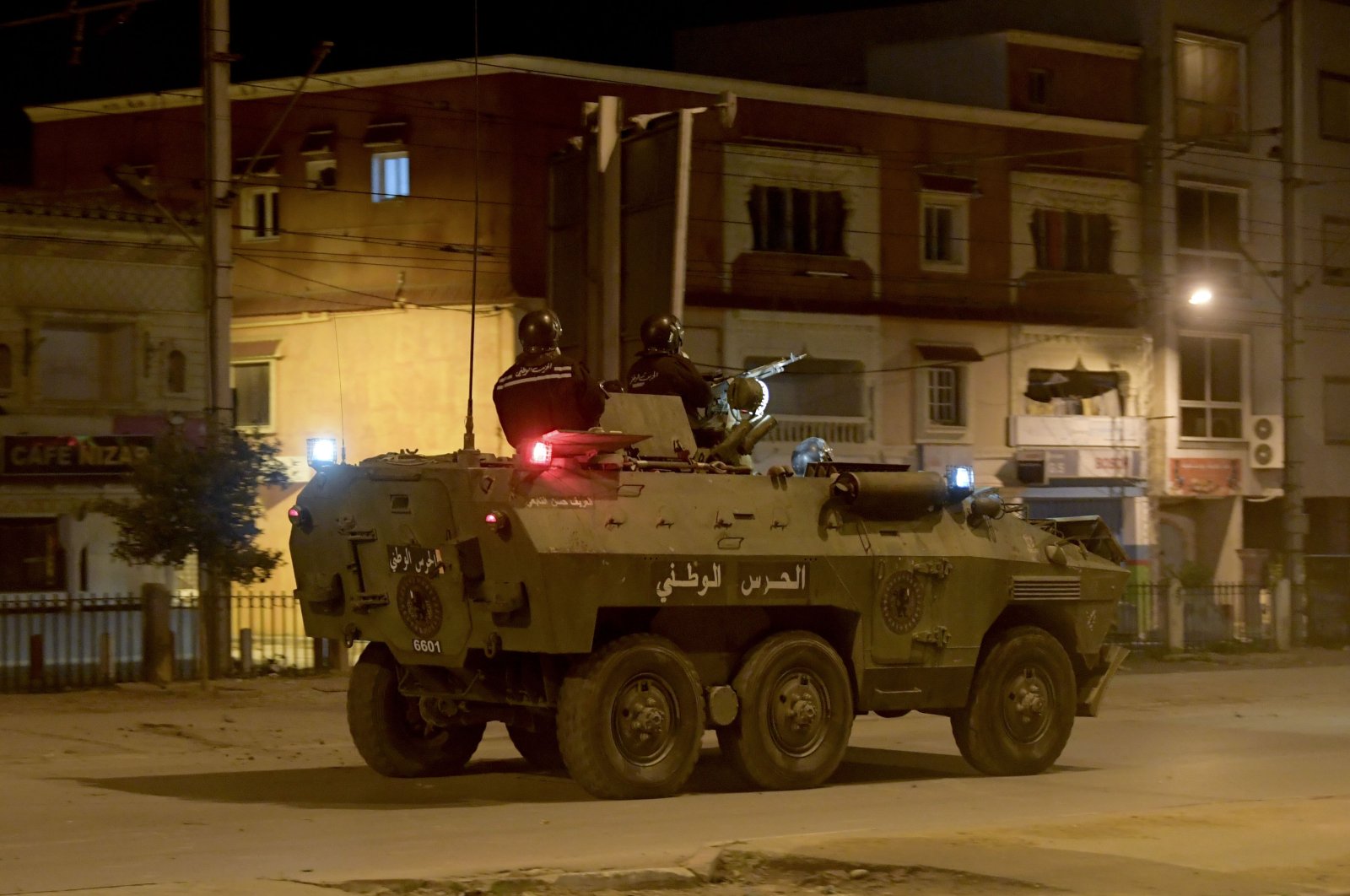 Members of the Tunisian National Guard sit atop their armored vehicle as they deploy on a street amid clashes with demonstrators following a protest in the Ettadhamen neighborhood in the capital Tunis, on Jan. 17, 2021. (AFP Photo)
by French Press Agency - AFP Jan 18, 2021 3:54 pm
RECOMMENDED

More than 600 people have been arrested and troops have been deployed after a third consecutive night of riots in several Tunisian cities, officials said Monday.

The unrest came after Tunisia imposed a nationwide lockdown to stem a rise in coronavirus infections on Thursday – the same day as it marked the 10th anniversary of dictator Zine El Abidine Ben Ali's fall from power.

Interior ministry spokesperson Khaled Hayouni said a total of 632 people were arrested, notably "groups of people between the ages of 15, 20 and 25 who burned tires and bins in order to block movements by the security forces".

Hayouni said that some of those arrested lobbed stones at police and clashed with security forces.

"This has nothing to do with protest movements that are guaranteed by the law and the constitution," said Hayouni. "Protests take place in broad daylight normally ... without any criminal acts involved," he added.

Hayouni said two police officers were wounded in the unrest.

It was not immediately clear if there were injuries among the youths and Hayouni did not say what charges those arrested faced.

The clashes took place in several cities across Tunisia, mostly in working-class neighborhoods with the exact reasons for the disturbances not immediately known.

But it came as many Tunisians are increasingly angered by poor public services and a political class that has repeatedly proved unable to govern coherently a decade on from the 2011 revolution.

GDP shrank by 9% last year, consumer prices have spiraled and one-third of young people are unemployed.

The key tourism sector, already on its knees after a string of deadly jihadist attacks in 2015, has been dealt a devastating blow by the pandemic.

Tunisia has registered more than 177,000 coronavirus infections, including over 5,600 deaths since the pandemic erupted last year.

The four-day lockdown ended on Sunday night, but it was not immediately known if other restrictions would be imposed.

The army has deployed troops in Bizerte in the north, Sousse in the east and Kasserine and Siliana in central Tunisia, the defense ministry spokesperson said.

Sousse, a coastal resort overlooking the Mediterranean, is a magnet for foreign holidaymaking that has been hit hard by the pandemic. The health crisis and ensuing economic misery have pushed growing numbers of Tunisians to seek to leave the country.

On Sunday evening in Ettadhamen, a restive working-class neighborhood on the edge of the Tunisian capital, the mood was sombre.

"I don't see any future here," said Abdelmoneim, a waiter, as the unrest unfolded around him. He blamed the violence on the country's post-revolution political class and said the rioting youths were "bored adolescents" who reflected the "failure" of politicians.

Abdelmoneim said he was determined to take a boat across the Mediterranean to Europe "as soon as possible and never come back to this miserable place."