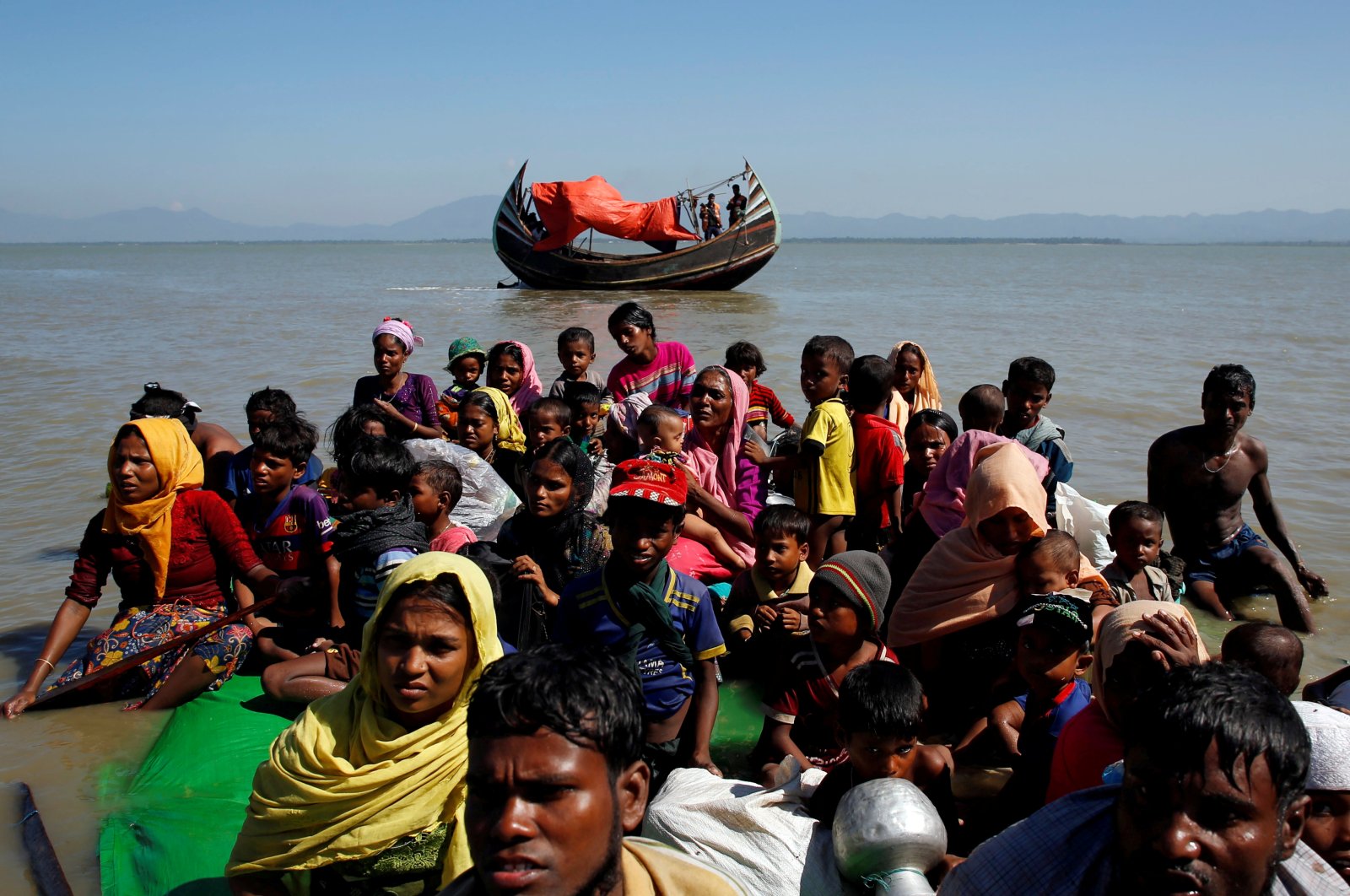 Rohingya refugees sit on a makeshift boat as they get interrogated by the Border Guard Bangladesh after crossing the Bangladesh-Myanmar border, at Shah Porir Dwip near Cox's Bazar, Bangladesh November 9, 2017. (Reuters Photo)
by DAILY SABAH WITH AGENCIES Feb 22, 2021 11:54 am
RECOMMENDED

A disabled boat carrying ethnic Rohingya Muslim, some dying from lack of food and water, is believed to drifting in the Andaman Sea, the United Nations' refugee agency said Monday while appealing to Southeast Asian governments to rescue them.

The vessel departed from Cox’s Bazar and Teknaf in Bangladesh 10 days ago and has been adrift for over a week after the engine broke down, the U.N. High Commission For Refugees (UNHCR) said. It could not confirm the number of people or the location of the boat but said the refugees reported the vessel ran out of food and water several days ago.

"In the absence of precise information as to the refugees' location, we have alerted the authorities of the relevant maritime states of these reports and appealed for their swift assistance," the UNHCR said in a statement.

"Immediate action is needed to save lives and prevent further tragedy," it said, offering to support governments by providing humanitarian help and quarantine measures to those rescued.

"Many are in a highly vulnerable condition and are apparently suffering from extreme dehydration. We understand that a number of refugees have already lost their lives and that fatalities have risen over the past 24 hours," said Indrika Ratwatte, UNHCR director for Asia and the Pacific, according to remarks carried by The Associated Press (AP).

"The fact that refugees and migrants continue to undertake fatal journeys accentuates the need for immediate and collective regional response to search, rescue and disembarkation," it added.

A senior Indian Coast Guard official told Reuters the boat has been tracked and was reported to be safe but did not yet know the condition of those aboard.

The Rohingya are a Muslim minority that has suffered persecution in Buddhist-majority Myanmar. Hundreds of thousands of Rohingya fled a deadly crackdown by Myanmar's security forces in 2017 and poured into neighboring Bangladesh, where about a million live in poor conditions in sprawling refugee camps, unable to work or leave without government permission.

Many Rohingya have fled in rickety boats while taking perilous journeys in the hope of reaching Malaysia and Indonesia.

Malaysia, with a predominantly Muslim population, has long been a favorite destination for a group that ranks among the world's most persecuted peoples. While boat trips have declined in recent years, Southeast Asian governments have tightened borders amid the COVID-19 pandemic.

Last year, dozens of refugees were found in boats drifting near the Malaysian island of Langkawi, and many more went ashore with the help of locals in the Indonesian province of Aceh.

A report conducted by Save the Children last year said that Rohingya are still willing to pay traders to travel, despite the risks. The Britain-based charity said that since January 2020 at least 2000 refugees have been stranded on boats in the Andaman Sea and the Bay of Bengal. It also noted that authorities found over 150 unaccompanied children among the severely malnourished survivors after a boat carrying refugees washed up in Bangladesh in April last year.