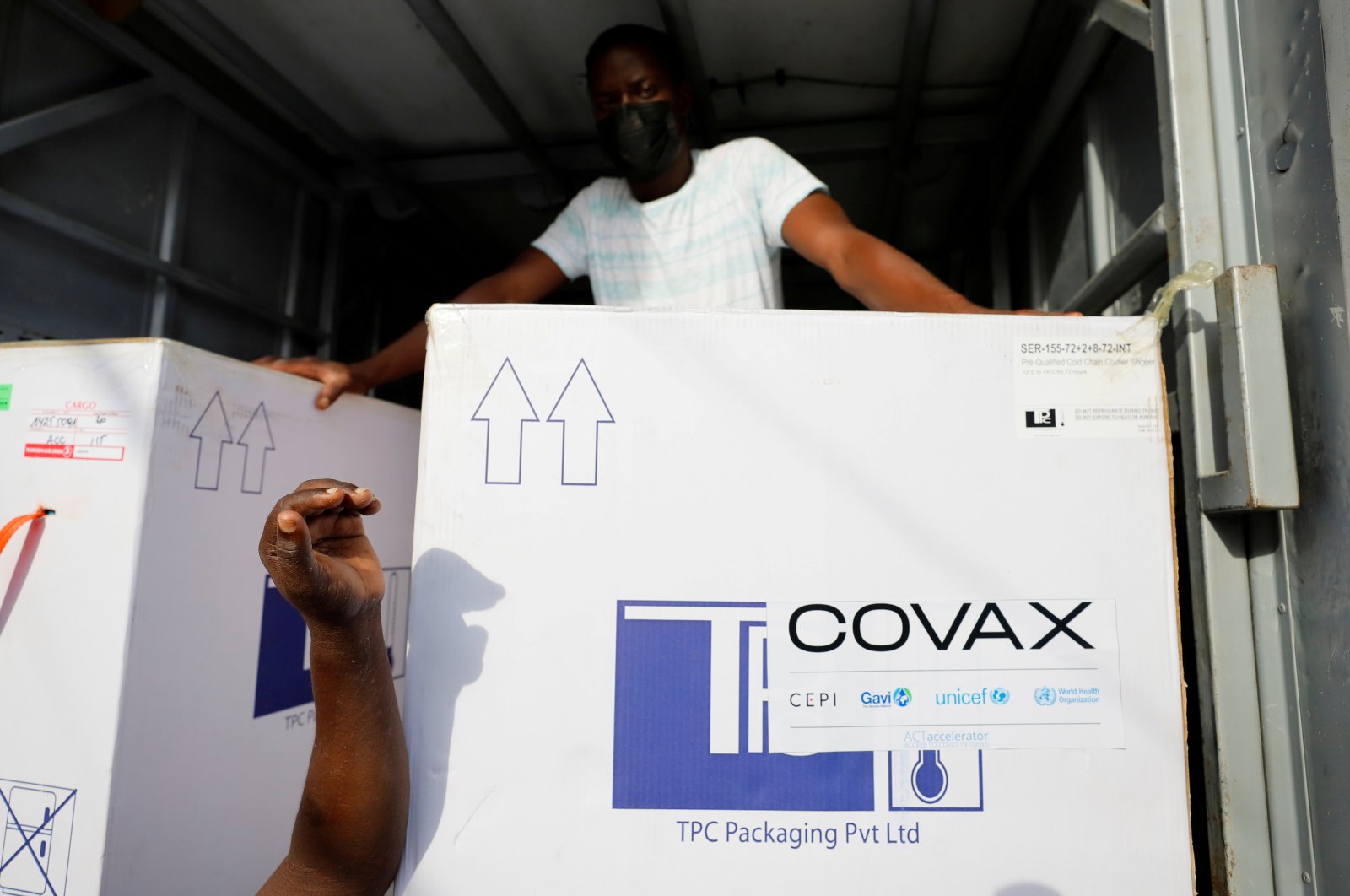 Boxes of AstraZeneca-Oxford coronavirus vaccines, redeployed from the Democratic Republic of Congo, arrive at a cold storage facility in Accra, Ghana, May 7, 2021. (Reuters Photo)
by Agencies May 17, 2021 11:48 am
RECOMMENDED

UNICEF's chief urged G-7 countries to make donations to the COVAX vaccine-sharing scheme as an emergency measure to address a serious shortage caused by disruptions to Indian vaccine exports.

India has curbed exports of the AstraZeneca vaccine made by its Serum Institute, which had been pledged to COVAX. The country said it needed the vaccines as it battles a massive second wave of infections.

U.N. agency UNICEF, which is in charge of supplying coronavirus vaccines through COVAX, estimates the supply shortfall at 140 million doses by the end of May and about 190 million by the end of June.

"Sharing immediately available excess doses is a minimum, essential and emergency stop-gap measure, and it is needed right now," said UNICEF Executive Director Henrietta Fore, adding that this could help to prevent vulnerable countries from becoming the next global hot spot.

As G-7 leaders prepare to meet in the U.K. next month, the head of the World Health Organization (WHO) last week denounced the "moral catastrophe" of vaccine inequity, urging wealthy countries to donate doses rather than use them for children who are less vulnerable to severe disease.

Citing new research from scientific information and analytics company Airfinity, UNICEF's Fore said that G-7 countries could donate about 153 million doses if they shared only 20% of their available supply over June, July and August.

This could be done while still meeting commitments to vaccinate their own populations, she said without providing further details. COVAX, run jointly by the WHO and the GAVI vaccine alliance, relies heavily on the AstraZeneca shot, which accounts for the bulk of the vaccines earmarked for early rollout as it seeks to provide 2 billion doses this year.

UNICEF said that other manufacturing limitations outside India had also slowed the supply of COVAX doses, but those delays are expected to be resolved by the end of June.

India reported a further decline in new coronavirus cases on Monday, but daily deaths remained above 4,000 and experts said the count was unreliable due to a lack of testing in rural areas where the virus is spreading fast. For months now, nowhere in the world has been hit harder than India by the pandemic, as a new strain of the virus fueled a surge in infections that has risen to more than 400,000 daily.

Even with a downturn over the past few days, experts said there was no certainty that infections had peaked, with alarm growing both at home and abroad over the highly contagious B.1.617 variant first found in India.

"There are still many parts of the country that have not yet experienced the peak, they are still going up," World Health Organization chief scientist Soumya Swaminathan was quoted as saying in the Hindu newspaper. According to Reuters, Swaminathan pointed to the "very high" national positivity rate, at about 20% of tests conducted, as a sign that there could be worse to come.

"Testing is still inadequate in a large number of states. And when you see high test positivity rates, clearly we are not testing enough. And so the absolute numbers actually don't mean anything when they are taken just by themselves; they have to be taken in the context of how much testing is done, and test positivity rate."

Having begun to decline last week, new infections over the past 24 hours were put at 281,386 by the Indian Health Ministry on Monday, dropping below 300,000 for the first time since April 21. The daily death count stood at 4,106. At the current rate, India's total caseload since the epidemic struck a year ago should pass the 25 million mark in the next couple of days. Total deaths were put at 274,390.

Hospitals have had to turn patients, away while mortuaries and crematoriums have been unable to cope with bodies piling up. Photographs and television images of funeral pyres burning in parking lots and corpses washing up on the banks of the Ganges river have fueled impatience with the government's handling of the crisis.

It is widely accepted that the official figures grossly underestimate the real impact of the epidemic, with some experts saying actual infections and deaths could be five to 10 times higher.

In the last week, the number of new cases plunged by nearly 70% in India's financial capital, Mumbai, home to 22 million people. After a peak of 11,000 daily cases, the city is now seeing fewer than 2,000 a day, as The Associated Press (AP) reported. A well-enforced lockdown and vigilant authorities are being credited for Mumbai's burgeoning success. Even the capital of New Delhi is seeing whispers of improvement as infections slacken after weeks of tragedy and desperation playing out in overcrowded hospitals and crematoriums and on the streets.