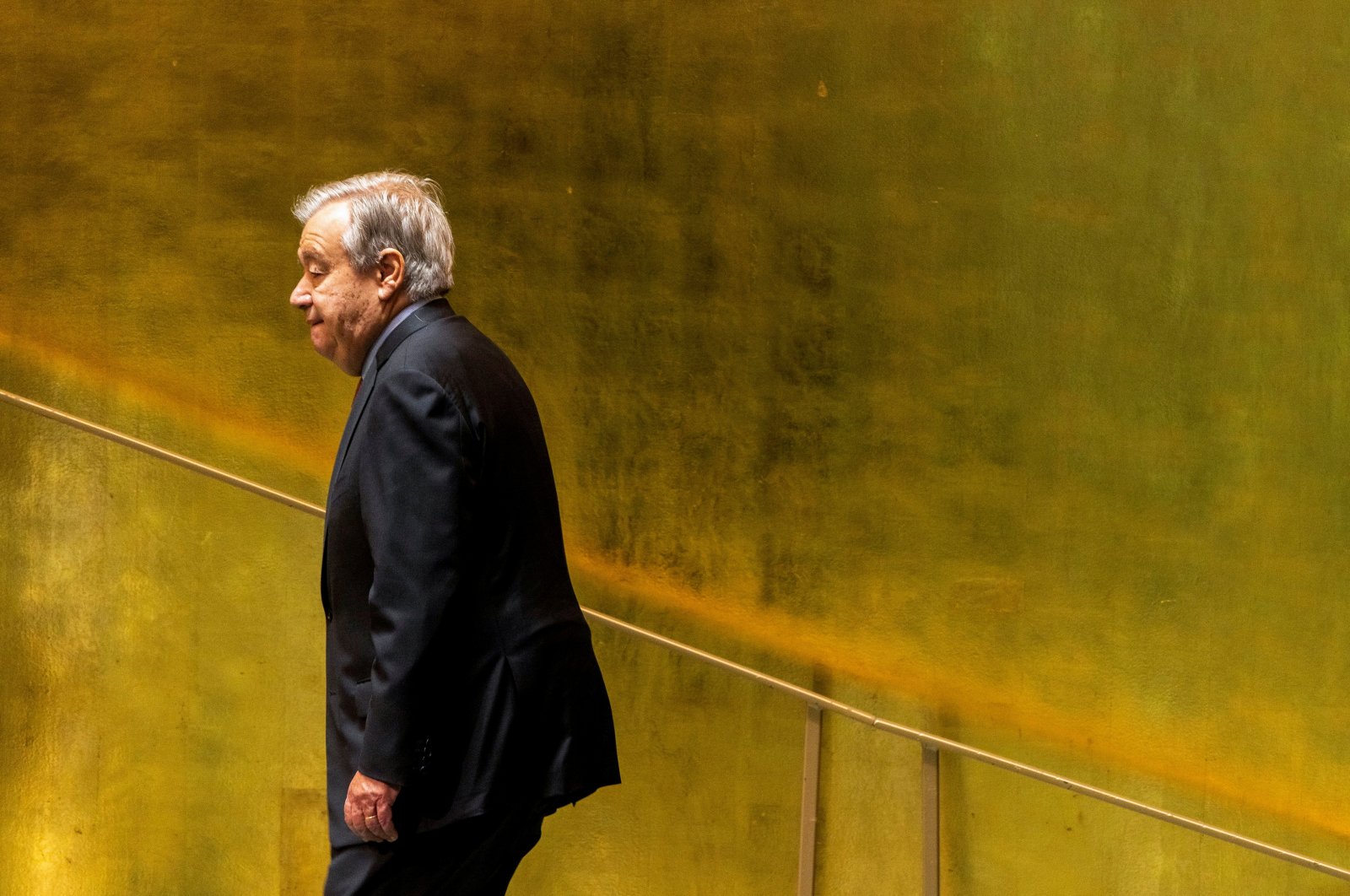 United Nations Secretary-General Antonio Guterres walks to his desk after addressing a high-level meeting to commemorate the 20th anniversary of the adoption of the Durban Declaration being held during the General Debate of the 76th Session of the U.N. General Assembly in New York City, New York, U.S., Sept. 22, 2021. (Reuters Photo)
by Reuters Oct 15, 2021 8:10 am
RECOMMENDED

U.N. chief Antonio Guterres asked to postpone a virtual meeting with Southeast Asian ministers at the last minute to avoid signaling recognition of Myanmar's junta by being in the same online room as the military's envoy, U.N. diplomats said.

The meeting between the U.N. secretary-general and foreign ministers from the 10-member Association of Southeast Asian Nations (ASEAN) – including the junta's foreign minister Wunna Maung Lwin – had been due to take place last Friday. But the day before, Guterres asked ASEAN to postpone the meeting "until a time when it can be held in a mutually agreeable format, in view of the ongoing urgent international and regional issues," according to an Oct. 8 note from ASEAN chair Brunei – seen by Reuters – notifying members of the delay.

U.N. diplomats, speaking on condition of anonymity, said Guterres does not want to get ahead of a decision by U.N. member states on who will sit in Myanmar's seat at the world body after rival claims were made by the junta and the current U.N. Ambassador Kyaw Moe Tun, appointed by the elected government. The junta seized power in a February coup, detaining Aung San Suu Kyi and other elected government leaders. United Nations credentials give weight to a government.

Guterres' reluctance to be seen at the same meeting at the junta envoy comes as ASEAN foreign ministers are due to separately meet on Friday to discuss excluding junta chief Min Aung Hlaing from an upcoming summit as pressure builds on the ruling military to comply with an agreed peace roadmap. ASEAN agreed on a five-point consensus with Min Aung Hlaing in April, but several members of the bloc have criticized the junta's failure to implement it. The junta has also ruled out allowing a regional envoy, Brunei's second foreign affairs minister, Erywan Yusof, to meet Suu Kyi.

While U.N. spokesman Stephane Dujarric told reporters last Friday that the secretary-general had requested that his meeting with ASEAN ministers be postponed and that talks would continue on the format, he did not explain why Guterres wanted the delay. Kyaw Moe Tun warned against Guterres taking part in a meeting that included an envoy from Myanmar's military, telling Reuters it could "destroy the Myanmar people's high hopes and expectations from the U.N., which we always think of our hope for the restoration of democracy in Myanmar."

A U.N. committee, which includes Russia, China and the United States, is due to meet next month to consider the competing credential applications and until a decision is made Kyaw Moe Tun remains in the seat. The committee could defer a decision and leave Kyaw Moe Tun as Myanmar's envoy. Myanmar's junta has put forward military veteran Aung Thurein to be its U.N. envoy, while Kyaw Moe Tun asked to renew his U.N. accreditation, despite being the target of a plot to kill or injure him over his opposition to the coup.