Azerbaijan frees 15 Armenian detainees in exchange for mine maps 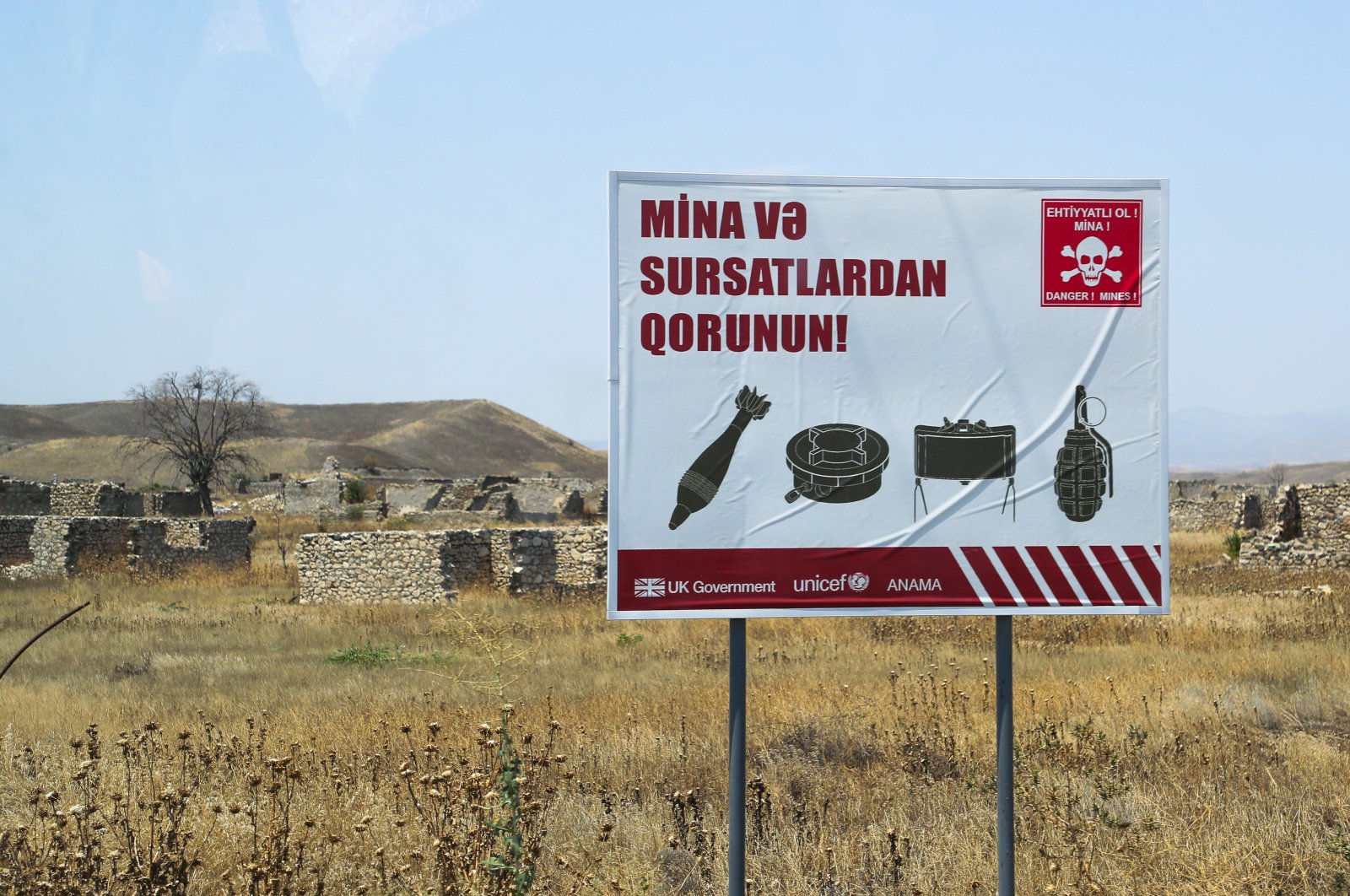 A sign warning of mines and ammunition is seen in the Zangilan district, where the Smart Village pilot project is being implemented, Azerbaijan, July 3, 2021. (Getty Images)
by DAILY SABAH Jul 04, 2021 1:55 pm
RECOMMENDED

More than seven months since a cease-fire agreement ended fighting over the Nagorno-Karabakh region, Azerbaijan handed over 15 Armenian detainees in exchange for maps of the locations of 92,000 anti-tank and anti-personnel mines planted during the occupation of the Fuzuli and Zangilan regions.

The maps were submitted by Armenia to Azerbaijan thanks to an initiative by Russia, said a written statement by the Azerbaijani Foreign Ministry.

"We express our gratitude to Rustam Muradov, Commander of the Russian peacekeeping contingent temporarily deployed in the territory of the Republic of Azerbaijan, for his mediation services in the implementation of the humanitarian initiative to obtain mine maps," it said.

The ministry also emphasized that obtaining the mine maps will save the lives of tens of thousands of Azerbaijanis, including those involved in clearing the mines. It will also accelerate the implementation of reconstruction and rehabilitation projects initiated by President Ilham Aliyev in the liberated territories, as well as the process of returning internally displaced persons.

"As a humanistic step, the Azerbaijani side handed over to Armenia 15 people of Armenian origin, who were imprisoned by the court's verdict and the term of the imposed sentence has expired," according to the statement.

A similar exchange had taken place in mid-June.

New clashes erupted last September and ended with a Russia-brokered cease-fire on Nov. 10, 2020.

During a subsequent 44-day conflict that ended under a deal signed Nov. 10, Azerbaijan liberated several cities and nearly 300 settlements and villages from Armenian nearly three-decade occupation.

A Russia-brokered peace deal that ended the hostilities between Baku and Yerevan last November was celebrated as a triumph in Azerbaijan. But it sparked a political crisis in Armenia, with thousands of opposition supporters taking to the streets to protest the terms of the deal and to demand the resignation of Armenia's Prime Minister Nikol Pashinian.

Now, work is underway to clear the retaken territories of land mines, repair infrastructure destroyed in the fighting and work on transit routes for the region that have been paralyzed for nearly three decades amid the conflict.

With the opening of new transportation lines, the rebuilding of liberated cities and the restoration of historical monuments, Azerbaijan intends to transform the region into an economic and tourism hub.