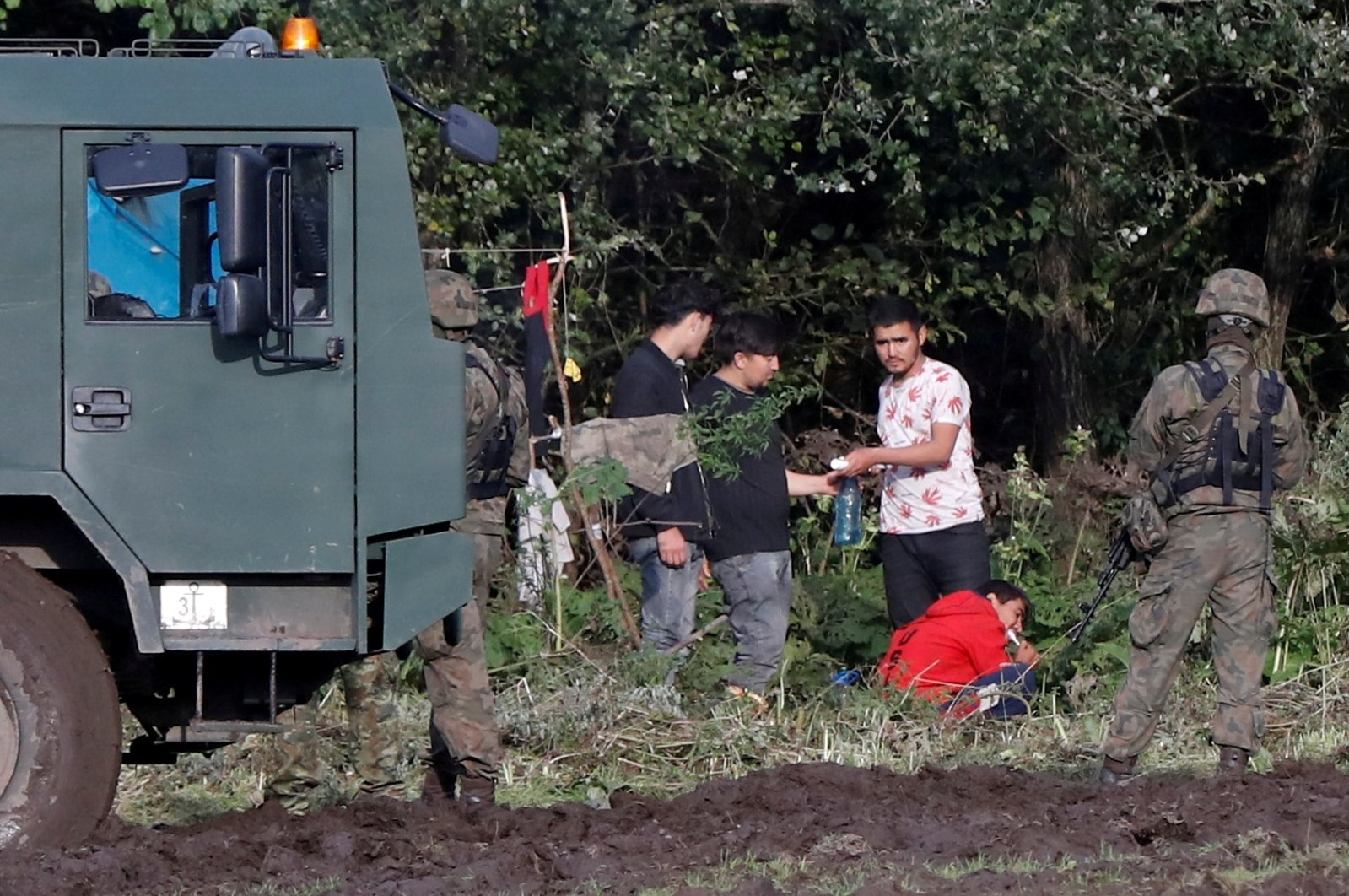 Polish border guards stand next to a group of migrants stranded on the frontier between Belarus and Poland near the village of Usnarz Gorny, Poland, Sept. 1, 2021. (REUTERS)
by ASSOCIATED PRESS Sep 27, 2021 8:28 pm
RECOMMENDED

Warsaw seeks to extend a state of emergency enforced along is border with Belarus, as Poland accuses its neighbor of provocative actions and claims some migrants detained on the border have links to terrorist groups.

Interior Minister Mariusz Kaminski told reporters Monday that Poland has recorded 9,400 attempts to illegally cross the Polish border from Belarus since August, with 8,200 of them being foiled. He said about 1,200 people are being held in detention centers after being caught attempting to illegally enter Poland.

He presented the findings of Poland's special services, which alleged that the phones of some of those detained show evidence of them having a criminal past, including ties to terrorist organizations, and in some cases longstanding ties to Russia.

The materials “suggest that Russia is emerging as more and more important point on the illegal migratory route to Poland and the European Union. Some of the detainees had photos documenting their long-standing relationship with Russia,” a statement from the special services said.

It said the presence of such individuals in Poland “may pose a serious national security threat.”

It was not possible to verify the claims.

“Incidents are being provoked at the border that may lead to very tense situations,” Blaszczak said.

The interior minister said he will recommend that the government prolong the state of emergency along the border. It was declared in early September for a 30 days and Kaminski said he wants to see it extended for another 60 days.

The governments of Poland, Lithuania and Latvia – European Union members on the bloc's eastern border with Belarus – accuse the Moscow-backed regime in Belarus of encouraging illegal migration into their countries by people from the Middle East and Africa in order to sow divisions and chaos within the EU.

Poland has reacted by reinforcing the borders with soldiers and razor wire to stop the attempted entries. Most aim to reach Germany, and some have apparently passed through undetected.

The state of emergency and other tough actions by the government in the face of the increased migration are largely popular with Poles. Yet, with reports of people being stranded for weeks and five confirmed migrant deaths in the border area, human rights activists say the response by authorities is inhumane.

Rights workers say the migrants are fleeing war or poverty at home and should be treated humanely. They view the state of emergency as unjustified, noting that it allows the authorities to act without any oversight in the border area.

Several activists entered the Warsaw office of the Polish Red Cross on Monday, beginning a sit-in protest as they accuse the organization of doing too little to help the migrants.