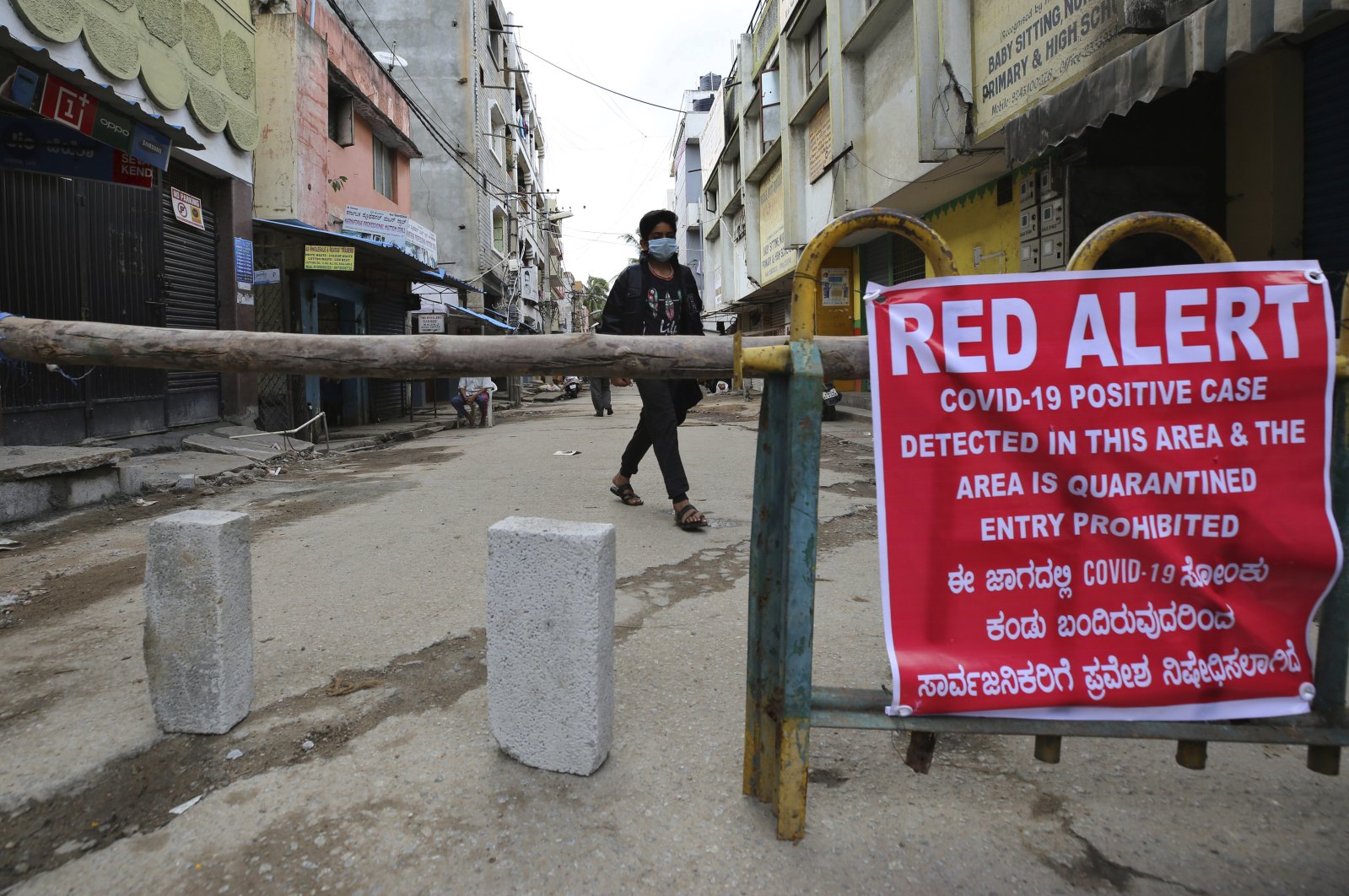 A boy wearing a face mask as a precaution against the coronavirus walks past a notice displayed in a containment zone, Bengaluru, July 5, 2020. (AP Photo)
by DAILY SABAH WITH AGENCIES Jul 06, 2020 2:12 pm

As coronavirus cases have surged in many parts of the world, India virus cases hit a new record, becoming the third hardest-hit country after the U.S. and Brazil

As the coronavirus outbreak is continuing its spread across the world, with more than 11 million confirmed cases, the number of infections has skyrocketed in the U.S., Brazil and India, becoming the top three worst virus-hit countries. Officials at the epicenter of the worsening coronavirus crisis in the U.S. warned Sunday that their hospitals were in danger of being overwhelmed by the upsurge, as India registered a record number of new cases, taking it past Russia to become the third-hardest-hit nation in the global pandemic.

While the coronavirus cases have surged in many parts of the world, countries face the daunting task of trying to guess when the worst is over. The United States is the hardest-hit country in the global pandemic, both in caseload and deaths, and has struggled to respond to the devastation wrought by the virus. The U.S. is now recording 40,000 new cases a day, with a peak of 57,000 on Friday alone. Hospital beds are full in parts of Texas, while calls for fresh stay-at-home orders are growing. Some mayors say their cities reopened too early, as President Donald Trump tries to downplay the disease that has gripped much of the country.

India faces similar challenges as it clocked a record daily number of cases across a vast nation where medical facilities are uneven and many COVID-19 infections are likely to be undiagnosed. India has registered 19,693 deaths from the virus, a much lower number than many other badly hit countries. India's major cities have been worst hit by the pandemic. New Delhi and Mumbai each have about 100,000 cases, with 3,000 dead in the capital and nearly 5,000 in Mumbai. New Delhi has opened a new 10,000-bed temporary virus hospital while other cities are tightening restrictions on movement to head off a new surge in cases. The Kerala state capital, Thiruvananthapuram, imposed a new lockdown starting Monday with public transport shut down and only pharmacies allowed to open. The clampdown came after hundreds of new cases were reported across the state, which had been praised for its action to curtail the pandemic.

African nations face a difficult choice as infections are rapidly rising: Welcome the international flights that originally brought COVID-19 to the ill-prepared continent, or further hurt their economies and restrict a lifeline for badly needed humanitarian aid.

In South Africa, dozens of military medics were deployed on Sunday after a surge in infections in East Cape province. Like India, South Africa imposed some of the strictest stay-at-home measures in the world in late March in a bid to limit the spread of COVID-19, but the number of infections is rising daily as the lockdown rules are gradually eased.

“This is a very important moment,” the World Health Organization’s Africa chief, Matshidiso Moeti, told reporters on Thursday, a day after Egypt reopened its airports for the first time in more than three months. Other countries are preparing to follow. That’s even as Africa had more than 463,000 confirmed virus cases as of Sunday and South Africa, its most developed economy, already struggles to care for COVID-19 patients. But Africa's economies are sick, too, its officials say. The continent faces its first recession in a quarter-century and has lost nearly $55 billion in the travel and tourism sectors in the past three months, the African Union says. Airlines alone have lost about $8 billion and some might not survive.

Elsewhere in the world, Australia has fared better than many countries in the coronavirus pandemic, with just short of 8,500 cases so far, but the Melbourne outbreak has raised alarm bells. The country has reported an average of 109 cases daily over the past week, compared with an average of just nine cases daily over the first week of June. Melbourne locals are concerned that renewed social distancing measures have not been implemented uniformly across the city.