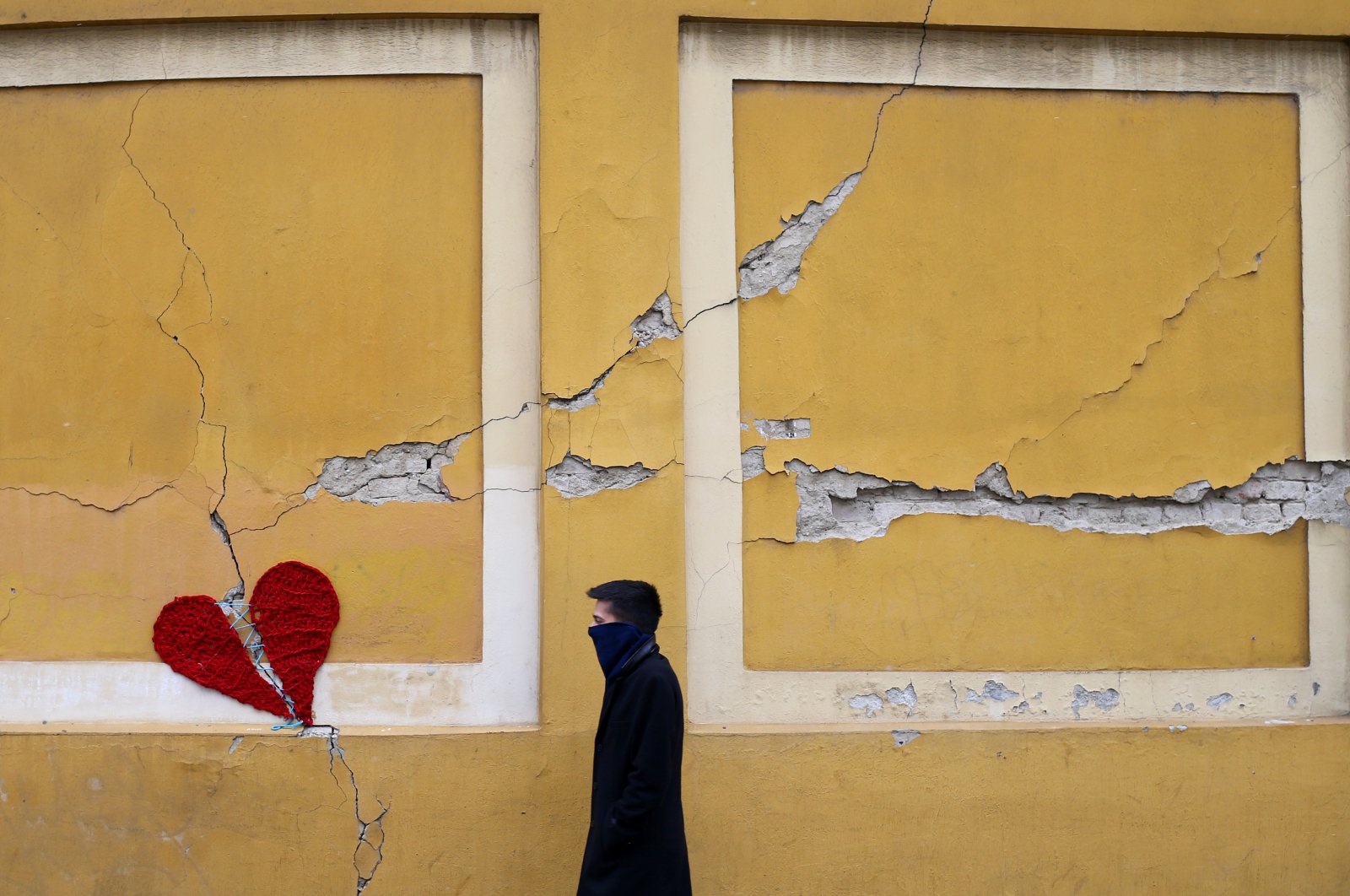 A man walks next to a repaired broken heart made of wool by Croatian designer Ivona, put on a building in downtown Zagreb, Croatia, March 25, 2020, as the country is fighting coronavirus disease (COVID-19) outbreak and the aftermatch of an earthquake that hit the country on March 22. (Reuters Photo)
by Associated Press Mar 28, 2020 7:07 pm
RECOMMENDED

The number of confirmed coronavirus infections worldwide topped 600,000 on Saturday as new cases stacked up quickly in Europe and the United States and officials dug in for a long fight against the pandemic.

The latest landmark came only two days after the world passed half a million infections, according to a tally by John Hopkins University, showing that much work remains to be done to slow the spread of the virus. It showed more than 615,000 cases and over 28,000 deaths.

While the U.S. now leads the world in reported infections – with more than 104,000 cases – five countries exceed its roughly 1,700 deaths: Italy, Spain, China, Iran and France.

"We cannot completely prevent infections at this stage, but we can and must in the immediate future achieve fewer new infections per day, a slower spread,” German Chancellor Angela Merkel, who is in quarantine at home after her doctor tested positive for the virus, told her compatriots in an audio message. "That will decide whether our health system can stand up to the virus.”

The virus has already put health systems in Italy, Spain and France under extreme strain. Lockdowns of varying severity have been introduced across Europe, nearly emptying streets in normally bustling cities, including Paris where drone photos showed the city's landmarks eerily deserted.

Merkel appealed to Germans to "be patient.” Her chief of staff said Germany – where authorities closed nonessential shops and banned gatherings of more than two in public – won't relax its restrictions before April 20.

Spain, where stay-at-home restrictions have been in place for nearly two weeks, reported 832 more deaths Saturday, its highest daily count yet, bringing its total to 5,690.

Another 8,000 confirmed infections pushed that count above 72,000. But Spain's director of emergencies, Fernando Simón, saw a ray of hope, noting that the rate of infection is slowing and figures "indicate that the outbreak is stabilizing and may be reaching its peak in some areas.”

Doctors, nurses and ambulance drivers in Spain's worst-hit regions are working nonstop and falling ill at an alarming rate. More than 9,000 health workers in the country have been infected.

"We are completely overwhelmed,” said paramedic Pablo Rojo at Barcelona’s Dos de Maig hospital. "Seven or eight (patients transported today) and all with COVID-19... And the average age is decreasing. They’re not 80 years old anymore, they are now 30 and 40 years old.”

"Sometimes you become a bit paranoid, you don’t know anymore when you pick up the phone if you have cleaned your hands, if you’ve sanitized them or not. You touch your face with your hands,” Rojo said.

Spain has struggled to get coronavirus tests and protective gear for health workers. The government has started flights to transport the supplies directly from China to reduce waiting times.

As the epicenter has shifted westward, the situation has calmed in China, where some restrictions have been lifted. Six subway lines restored limited service in Wuhan, where the virus first emerged in December, after the city had its official coronavirus risk evaluation downgraded from high to medium on Friday. Five districts of the city of 11 million people had other travel restrictions loosened after their risk factor was downgraded to low.

More than 135,000 people have recovered, according to Johns Hopkins.

The effects of the outbreak have been felt by the powerful and the poor alike.

On Friday, British Prime Minister Boris Johnson became the first leader of a major country to test positive for the virus. He said he would continue to work from self-quarantine.

In prosperous Finland, police at roadblocks started restricting the movement of people into and out of its worst-hit Uusimaa region, which includes the capital, Helsinki.

Countries are still scrambling to bring home some citizens stranded abroad by border closures and a near-shutdown of flights. On Saturday, 174 foreign tourists and four Nepali nationals in the foothills of Mount Everest were flown out days after being stranded on the only airstrip serving the world's highest mountain.

In neighboring India, authorities sent a fleet of buses to the outskirts of the capital to meet an exodus of migrant workers desperately trying to reach their home villages during the world's largest lockdown.

Thousands of people had fled their New Delhi homes after Prime Minister Narendra Modi announced a 21-day lockdown that began Wednesday and effectively put millions out of work.

In parts of Africa, virus prevention measures took a violent turn as countries imposed lockdowns and curfews or sealed off major cities, with police in Kenya firing tear gas and officers elsewhere captured on video hitting people with batons.

New York remained the worst-hit U.S. city. Gov. Andrew Cuomo said that the struggle to defeat the virus will take "weeks and weeks and weeks.”

Virus cases have been rising rapidly in some American cities such as Detroit, where poverty and poor health have been problems for years. Mayor Mike Duggan pointed to aggressive testing as a reason behind the quickly growing numbers.

"Part of what we're seeing in Detroit is that there's such a high number of individuals who have those underlying conditions, who have diabetes and the heart disease, who may have obesity,” said Dr. Joneigh Khaldun, Michigan's chief medical executive, who previously led the city's health department.

"What you're seeing now is when you have really generations of concentrated poverty and what we call those social determinants of health that impact a city like Detroit, when you have pandemics like this, it's going to hit those places harder."

Trump signed a $2.2 trillion stimulus package, after the House approved the sweeping measure by voice vote. It will send checks to millions of Americans, boost unemployment benefits, help businesses and toss a life preserver to an overwhelmed health care system.

Dr. John Brooks of the U.S. Centers for Disease Control and Prevention warned that Americans remained "in the acceleration phase” of the pandemic and that all corners of the country are at risk.

"There is no geographic part of the United States that is spared from this," he said.