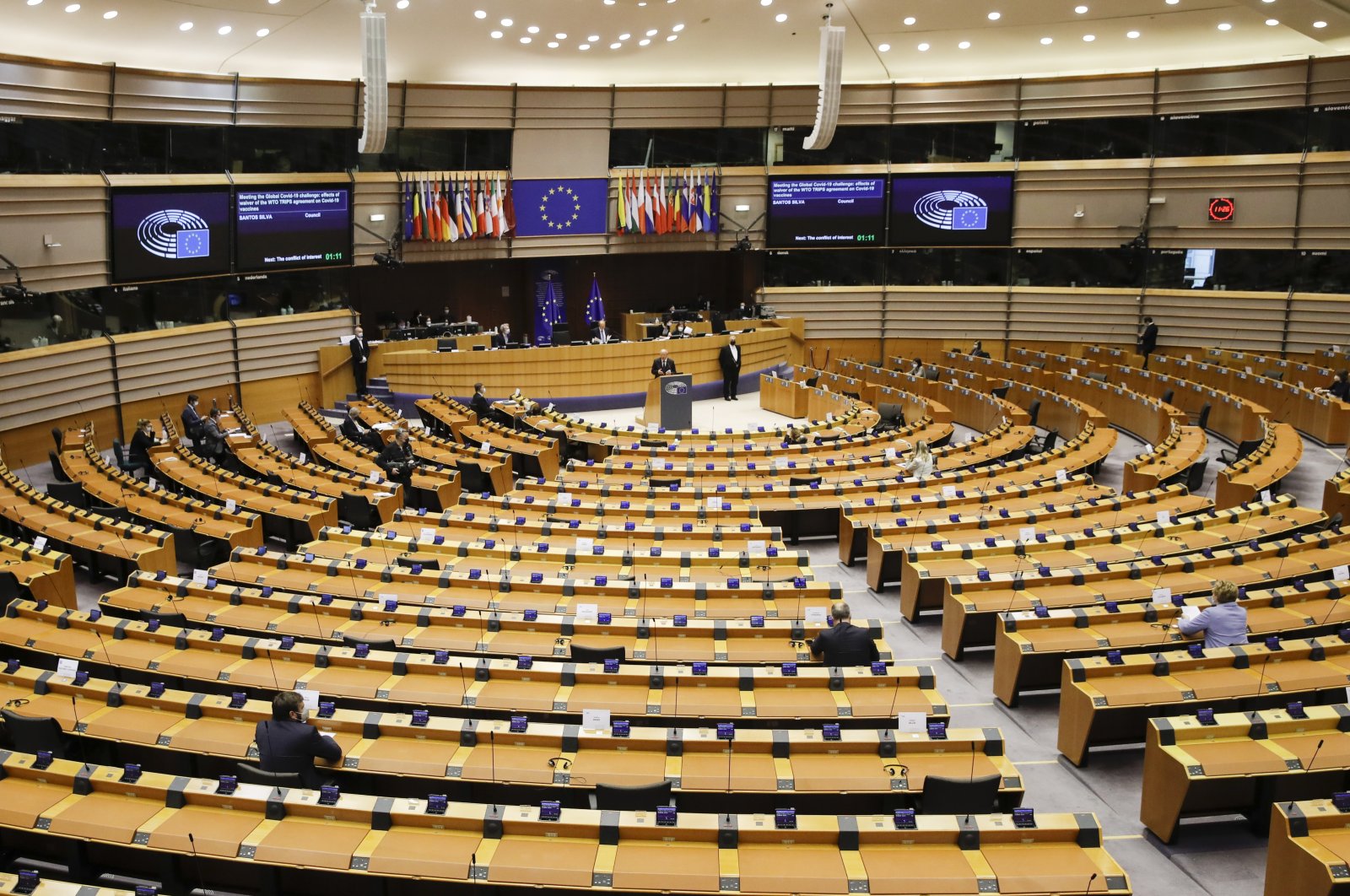 Portuguese Minister for Foreign Affairs Augusto Santos Silva during the debate "Meeting the Global COVID-19 challenge: effects of waiver of the WTO TRIPS agreement on COVID-19 vaccines, treatment, equipment and increasing production and manufacturing capacity in developing countries" at a plenary session of the European Parliament in Brussels, Belgium, May 19, 2021. (EPA Photo)
by French Press Agency - AFP May 22, 2021 5:08 pm
RECOMMENDED

A proposal at the World Trade Organization (WTO) for patent waivers for medical tools for the fight against COVID-19 has been revised by dozens of countries, demanding it must be broader than just vaccines, nongovernmental organizations (NGOs) said Saturday.

More than 60 countries have presented a revision of their text before WTO on ditching intellectual property (IP) protections for COVID-19 jabs and other medical tools while the pandemic rages, according to the Doctors Without Borders (MSF) charity and NGO Knowledge Ecology International (KEI).

KEI published what it said was the revised text, which pushed for the waiver to be broad and long-lasting.

The WTO did not immediately verify the authenticity of the document, but a Western diplomat close to the waiver discussions confirmed it was genuine and had been distributed to all WTO members.

That text said the waiver should cover all medical "prevention, treatment and containment" tools needed to battle coronavirus.

In addition to vaccines, it should include treatments, diagnostics, vaccines, medical devices and protective equipment, along with the material and components needed to produce them, it said.

It also said the waiver should last for "at least three years" from the date it takes effect, following which, the WTO's General Council should determine whether it could be lifted or should be prolonged.

"We are pleased to see the governments sponsoring the COVID-19 intellectual property waiver proposal reaffirm that the waiver aims to remove monopoly barriers for all medical tools ... needed to tackle this pandemic," MSF South Asia chief Leena Manghaney said in a statement.

"With a frightening increase in infections and deaths in developing countries, and with potentially promising treatments in the pipeline, it is crucial that governments have every flexibility at their disposal to beat back this pandemic," she said.

Since October, the WTO has faced calls led by India and South Africa for the temporary removal of such IP protections, in what proponents argue will boost production in developing countries and address the dramatic inequity in access.

That notion has long met with fierce opposition from pharmaceutical giants and their host countries, which insisted patents were not the main roadblocks to scaling up production and warned the move could hamper innovation.

The positions appeared to shift earlier this month, when Washington came out in support of a global patent waiver for the jabs, with other long-time opponents voicing openness to discuss the matter.

The European Parliament voted narrowly this week to urge Brussels to get behind the proposal.

Observers have however said the ambitions for the waiver appear to differ significantly among the longtime supporters and those now coming around to the idea, who have seemed to focus more narrowly on vaccines.

It remains unclear if countries will be able to see eye to eye, but with the pandemic that has killed over 3.4 million people still far from over, there is intense pressure on them to do so.

With the new revision on the table, MSF called for "governments to immediately move towards text-based negotiations," insisting there was no time to lose.

In light of the WTO's usual glacial pace in decision-making – with agreements requiring consensus backing by all 164 member states – a deal could meanwhile take time.

According to MSF, more than 100 countries overall now support the proposal, including China and Russia.

A full 62 countries are now official co-sponsors of the proposal, with Indonesia, Fiji, Vanuatu and Namibia having joined in recent weeks.