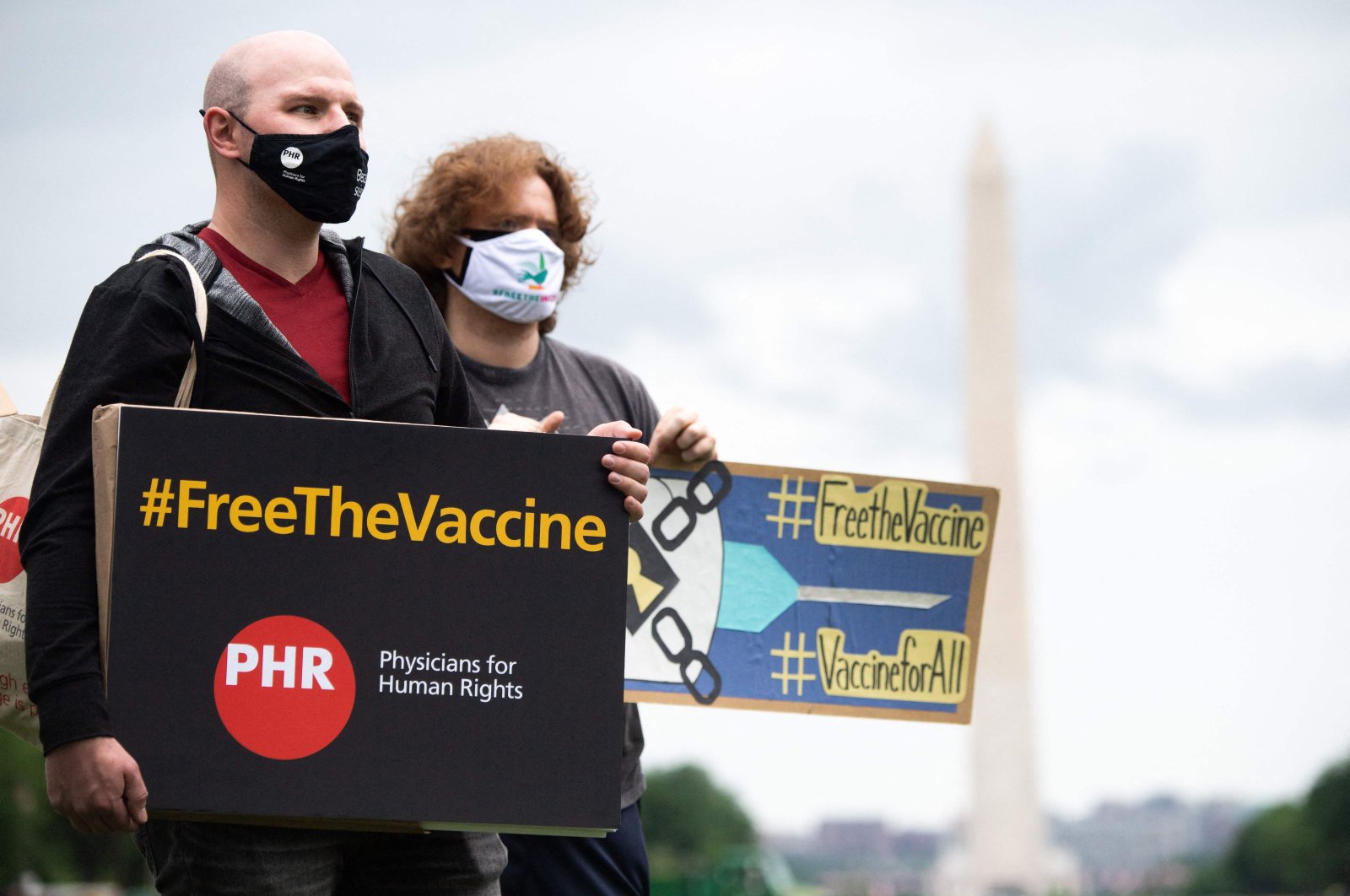 Demonstrators hold a rally to "Free the Vaccine," calling on the U.S. to commit to a global coronavirus vaccination plan that includes sharing vaccine formulas with the world to help ensure that every nation has access to a vaccine, on the National Mall in Washington, D.C., U.S., May 5, 2021. (AFP Photo)
by French Press Agency - AFP May 07, 2021 1:02 pm
RECOMMENDED

The United States proposal to waive patents on COVID-19 vaccines was met with strong opposition from the German government and the country’s vaccine producers on Thursday, which has reduced the prospect of a consensus of World Trade Organization (WTO) members.

Pfizer CEO Albert Bourla meanwhile told Agence France-Presse (AFP) that his company was "not at all" in favor of the measure, insisting intellectual property is not the main roadblock to more production and that building new plants would be counterproductive.

Rich nations have faced accusations of hoarding shots, while poor countries struggle to get inoculation programs off the ground, with the virus surging across the developing world in contrast to the easing of restrictions in Europe and the U.S.

The problem was highlighted as India, one of the worst-hit countries, registered record COVID-19 cases and deaths on Thursday.

Under intense pressure to ease protections for vaccine manufacturers, Washington's Trade Representative Katherine Tai said Wednesday that the U.S. "supports the waiver of those protections for COVID-19 vaccines."

World Health Organization (WHO) chief Tedros Adhanom Ghebreyesus hailed the announcement as "a monumental moment in the fight against COVID-19."

The move was also praised by the African Union, Paris, Rome and Vienna as well as by WTO chief Ngozi Okonjo-Iweala.

However, Berlin's decision to come out strongly against the proposal has now left its fate unclear.

"The protection of intellectual property is a source of innovation and must remain so in the future," a spokesperson for Chancellor Angela Merkel's government said.

Bourla, whose company developed the first vaccine authorized in the West with Germany's BioNTech, told AFP that it was not possible for other facilities to develop vaccines based on mRNA technology.

The U.S.-Germany rift, a boon to big pharmaceutical companies, comes as more than 3.2 million people have died from the virus worldwide since the crisis began in late 2019.

Shares in vaccine manufacturers dropped after the EU and Russia followed the U.S. in signaling they are open to the idea of patent waivers for coronavirus vaccines.

But the sell-off was less severe than the day before, which Gregori Volokhine of Meeschaert Financial Services credited to traders realizing the complexity of reaching an agreement at the WTO and German intransigence.

Supporters of the waiver say that easing patent restrictions will spur the production of low-cost generic vaccines, helping poor countries that are struggling to immunize their populations.

India has been leading the fight to allow more drugmakers to manufacture the vaccines, as it faces a surge that has seen patients die in streets outside hospitals due to bed and medical oxygen shortages.

The country on Thursday reported almost 4,000 COVID-19 deaths and more than 412,000 infections – both new records.

The crisis in India has sparked a chain reaction, with the WHO warning Thursday of a new wave of COVID-19 infections in Africa due to delayed vaccine supplies from the South Asian giant.

"The delay in the delivery of vaccine doses from the Serum Institute of India earmarked for Africa, the delay in the deployment of vaccines and the emergence of new variants means that the risk of a new wave of infections remains very high in Africa," it said in a statement.

Egypt, which announced a partial shutdown of malls and restaurants, called off festivities for the holiday to curb the spread.

The country has now recorded more than 13,000 deaths, with Prime Minister Mostafa Madbouli saying it was suffering a "third wave."

Eid celebrations are also facing disruption in Malaysia, where new rules in the capital, Kuala Lumpur, will see only essential businesses allowed to operate and restaurant dining-in banned after daily cases topped 3,000 recently.

As Europe gears up for the summer holiday season, Israel was added to an EU safe list for countries whose nationals can freely travel to the continent.

The vaccine rollout is speeding up in Europe, with Germany aiming to offer vaccines to all children aged 12 and over by the end of August once a jab is approved for younger people by the European regulator, Health Minister Jens Spahn said.

And gyms, theaters and cinemas on Thursday welcomed Danes back thanks to a new round of COVID-19 restriction easing and a reliance on a "corona pass" indicating vaccination, past infection or a recent negative test.