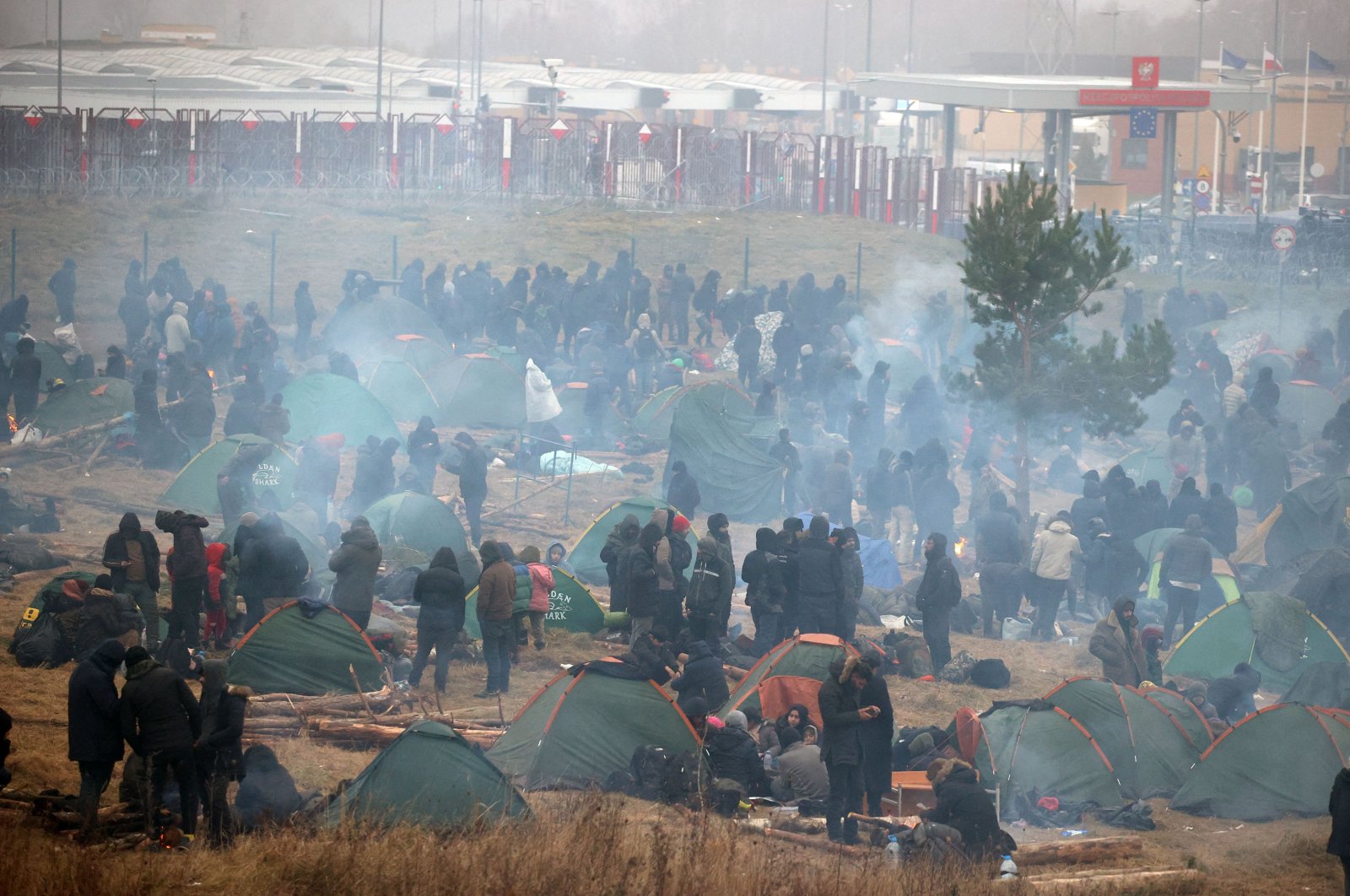 Migrants aiming to cross into Poland are seen in a camp near the Bruzgi-Kuznica border crossing on the Belarusian-Polish border, Nov. 17, 2021. (AFP Photo)
by DAILY SABAH WITH AGENCIES Nov 18, 2021 12:12 pm

The Polish army on Thursday said it had detained a group of about 100 migrants who crossed the Belarus border during the night, accusing Belarusian forces of leading the operation.

The incident came as Belarus, which has said it wants to defuse the crisis, prepared the first repatriation flight for migrants to Iraq that will have between 200 and 300 people on board.

Thousands of migrants, mainly from the Middle East, are camped out or staying close to the Poland-Belarus border in dire conditions aiming to cross into the European Union, in a crisis that began over the summer.

The EU says Belarus engineered the crisis in retaliation for sanctions on the ex-Soviet country. Minsk and its main ally Russia have rejected the charges and have criticised the EU for not taking in the migrants seeking to cross over. In the latest border incident, the Polish Defense Ministry said that Belarusian forces had first carried out reconnaissance and "most likely" damaged the barbed wire fence along the border.

"Then the Belarusians forced the migrants to throw stones at Polish soldiers to distract them. The attempt to cross the border took place several hundred metres away," it said. "A group of about 100 migrants was detained," it said, adding that the incident happened near the village of Dubicze Cerkiewne.

On Thursday, around 200-300 people, mainly men but also families with young children, remained huddled around makeshift fires near the Kuznica-Bruzgi border point, a Reuters reporter on the Belarusian side of the frontier said. Others had set up a few tents and a man could be seen feeding a baby. They were surrounded by Belarusian soldiers wearing masks, helmets and vests, and a water cannon could be seen on the Polish side of the border.

The foreign ministers of G-7 countries urged Minsk Thursday to end a migrant crisis on its border with Poland. Britain, Canada, France, Germany, Italy, Japan and the United States charged that President Alexander Lukashenko's regime orchestrated irregular migration across its borders. In a joint statement also signed by the EU and issued by the government in London, the ministers said: "These callous acts are putting people's lives at risk.

"We are united in our solidarity with Poland, as well as Lithuania and Latvia, who have been targeted by this provocative use of irregular migration as a hybrid tactic. "We call on the regime to cease immediately its aggressive and exploitative campaign in order to prevent further deaths and suffering."

Lukashenko, who has ruled with an iron fist for nearly three decades, has spoken to German Chancellor Angela Merkel on the crisis twice in recent days. His press service on Wednesday said the Belarus leader and Merkel "agreed that the problem as a whole will be brought up to the level of Belarus and the EU."

"Relevant officials, to be determined from both sides, will immediately start negotiations to resolve the existing problems," it said.

Merkel's spokesperson Steffen Seibert said the German leader had "underlined the need to provide humanitarian care and return options for the affected people."

An EU spokesperson said there were "technical talks" and urged Minsk to grant humanitarian access to the border area.

Poland estimates there are between 3,000 and 4,000 migrants along the entire border, with the largest group staying close to the shut down Bruzgi-Kuznica border crossing. The Belarusian Red Cross says around 1,000 migrants are staying in a warehouse near that crossing and 800 more are camped nearby.

Belarus said it was preparing a voluntary repatriation flight that is planned to take off from Minsk at around 10:45 a.m. GMT on Thursday and will fly first to Irbil and then to Baghdad.

Several airlines have also said they are trying to stop would-be migrants from traveling to Belarus in the first place. But officials have warned that the crisis may take time to defuse.

Lebanon instructed airlines to limit passengers traveling to Belarus to those having visas, residency permits or Belarusian citizenship, according to a statement by the country's Civil Aviation Department seen by Reuters on Thursday.

Earlier, Turkish Airlines banned Iraqis, Syrians and Yemenis from flying to Belarus via Turkey and private Syrian carrier Cham Wings Airlines has said it will halt flights to Minsk. Belarus's state-run airline Belavia has also said that Syrians, Iraqis, Yemenis and Afghans are banned from incoming flights from the United Arab Emirates (UAE) at Dubai's request.

Polish Prime Minister Mateusz Morawiecki has warned that Europe will receive an influx of "millions" of migrants if border policies remain lax. Speaking in an interview with German tabloid Bild, he said that he did not rule out the danger of war in view of developments on the Polish-Belarusian border.

"If we are not able to keep out thousands of immigrants now, soon there will be hundreds of thousands, millions, coming towards Europe," Morawiecki told Bild. "If we don't decisively protect and defend our borders in Europe, hundreds of millions from Africa or the Middle East will try to come to Europe and especially to Germany," he said.

Morawiecki described the situation at the Belarusian border, where thousands of migrants are trying to reach the EU country of Poland, as stable with a growing risk. In an interview, he blamed Belarus for using the migrants as a weapon and said that the main target are Germany, France and the Netherlands, as news site Polish News reported Thursday.

While expressing gratitude to leader of Germany's center-left candidate for chancellor Olaf Scholz, Morawiecki blamed the outgoing leader of the country, Angela Merkel, for putting the whole continent under threat, saying that her 2015 immigration policies "threatened the sovereignty of many European countries and created artificial multiculturalism."

“More than 80 million people live in Germany. Would you allow another 50 million to come? I think that people in Germany would not be satisfied with this, because they want to maintain their standard of living. They also want to keep their cultur,” Morawiecki said, adding that while Lukashenka and Putin are clearly pursuing a "strategy of causing unrest" and destabilizing the West "we Poles are determined to protect our border by all means. The eastern border of Europe and also of NATO."

Morawiecki said he was pleased to have the support of Germany and other NATO states. Now a joint declaration by Poland, Lithuania and Latvia could follow.

"Another step could be to activate Article 4 of the NATO Treaty, which officially states the violation of their territories," he said.

The article provides for consultations between the allies, but not yet for military assistance. Morawiecki added that it was not known what Belarus and Russia were planning.

"It is also possible that the crisis on the border is only meant to distract from new military attacks that (Russian President Vladimir) Putin is preparing in Ukraine," he said.

At least 11 migrants have died on both sides since the influx started in the summer, according to aid groups. One of them, a 19-year-old Syrian man from the war-torn city of Homs, was laid to rest on Monday in a cemetery near the border belonging to Poland's tiny ethnic Muslim community.

Polish Defense Minister Mariusz Blaszczak said Wednesday: "We have to prepare for the fact that the situation on the Polish-Belarusian border will not be resolved quickly.

"We have to prepare for months or even years," he told Poland's Radio Jedynka.

In an interview with Agence France-Presse (AFP), Fabrice Leggeri, the head of the EU border agency Frontex, also said that the EU should prepare for more "hybrid" migrant crises engineered for political ends.

"We have to prepare ourselves for situations like this which can arise quite quickly," he said, comparing the current standoff to one on the Greece-Turkey border last year.