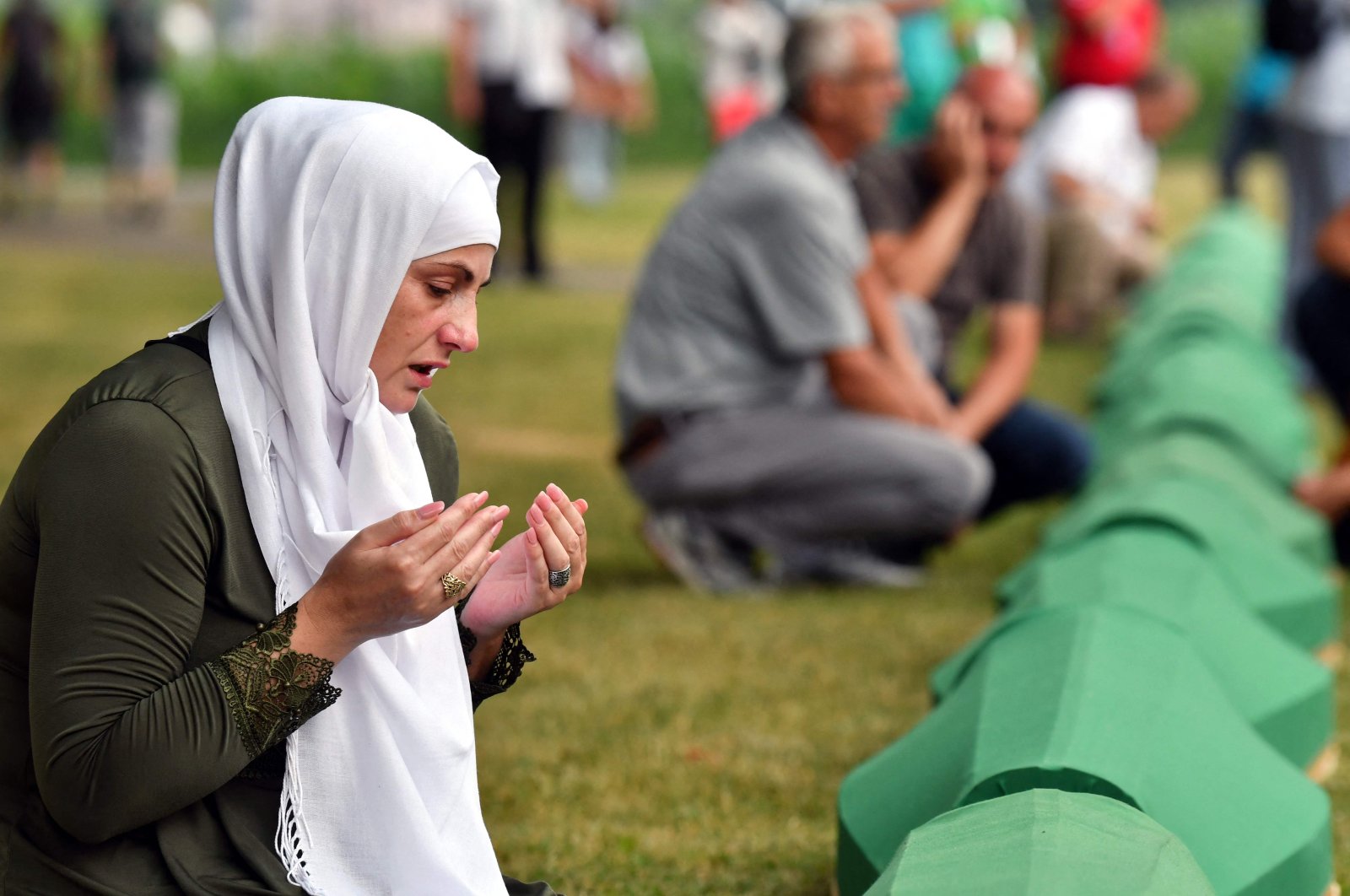 A Muslim Bosnian woman, a survivor of the Srebrenica 1995 massacre, prays as she mourns near the casket of her relative, at the memorial cemetery in the village of Potocari, near the eastern Bosnian town of Srebrenica, on July 10, 2021. (AFP Photo)
by DAILY SABAH WITH AGENCIES Jul 11, 2021 12:34 pm

Thousands of people in Bosnia-Herzegovina gathered on Sunday to commemorate the 1995 Srebrenica massacre – Europe’s only acknowledged genocide since World War II – and bury 19 newly identified victims.

The execution of thousands of Muslim Bosnians, most of them men and boys, is being commemorated in a series of events held Sunday, followed by the reburial of victims whose remains were found in mass graves and recently identified through DNA analysis.

Twenty-six years after they were brutally murdered, 16 men, two teenage boys and a woman will be laid to rest at a memorial cemetery at the entrance to the eastern town, joining more than 6,600 other massacre victims already reburied there. Newly identified victims are given a dignified burial each year on July 11 – the anniversary of the day the killing began in 1995.

"As soon as I got up and had a coffee, I came to visit the graves of my husband and his brother, to say a prayer," said Kadefa Rizvanovic, who lost 20 male relatives in the slaughter and still hasn't found the remains of all of them. "My paternal and maternal uncles are also buried here. I said a prayer for them and for all the victims of Srebrenica,” she added.

The coffins of 19 victims killed in the genocide in Srebrenica were moved to the Potocari Memorial Cemetery. The victims were brought to the cemetery on shoulders from the old battery factory used as a base by U.N. soldiers during the war.

Most of the massacre victims were hunted down and summarily executed as they tried to flee into the nearby forest after Srebrenica was overrun by Bosnian Serb forces on July 11, 1995, in the waning days of Bosnia-Herzegovina's 1992-95 fratricidal war. Their bodies were plowed into hastily dug mass graves and then later excavated with bulldozers and scattered among other burial sites to hide evidence of the crime. Participants of the march, which was held this year for the seventeenth time, prayed for the victims.

The U.N. Security Council declared Srebrenica a "safe area” in the spring of 1993, but troops led by Gen. Mladic overran the U.N. zone. Mladic was later found guilty of war crimes, crimes against humanity and genocide. Dutch troops failed to act as Serb forces occupied the area, killing 2,000 men and boys on the day of July 11, 1995, alone. More than 20,000 women and children were forcibly expelled from their homes.

Bodies of victims have been found in 570 different areas across the country. In 2007, the International Court of Justice at The Hague ruled that genocide had been committed in Srebrenica. On June 8, U.N. tribunal judges upheld in a second-instance trial, and sentenced Mladic to life in prison for the genocide, persecution, crimes against humanity, extermination, and other war crimes in Bosnia-Herzegovina.

Through tears and in between fraught silences, Devla Ajsic refuses to remain quiet any longer. Ajsic was 21 years old and three months pregnant in July 1995 when she was repeatedly sexually assaulted in Srebrenica while her fiance and thousands of other mostly Muslim men and boys were taken away and executed. For decades, Ajsic did not talk openly about the horrors she endured after Bosnian Serb forces stormed the eastern Bosnian town in the waning months of the Balkan country’s 1992-1995 war.

"I locked it all inside for 26 years and suffered in silence. I had no one to confide in, no one to share my pain with ... I cannot take it any longer,” said the now 47-year-old Ajsic, steeling herself as she finally spoke publicly of her ordeal on the eve of the 26th anniversary of the massacre.

When Bosnian Serb forces captured Srebrenica, about 30,000 of its terrified Muslim residents rushed to the U.N. compound at the entrance to town in the hope that the Dutch U.N. peacekeepers there would protect them. However, the outgunned and outnumbered peacekeepers watched as Serb troops took some 2,000 men and boys from the compound for execution, raped the women and girls, and then bused the women, children and elderly to Bosnian Muslim-held territory.

Ajsic said she was sexually assaulted and tortured for three days before departing Srebrenica in one of the last buses packed with refugees.

"The things they did to me, they tied me to a desk, my neck and my chest were blue from bruises, I was sprawled naked on that table,” she recounted, sobbing. The Associated Press (AP) typically doesn’t name sexual abuse victims except in cases where they opt to speak publicly. Ajsic said the Serb soldiers drugged her, clouding her mind, but even so, she was acutely aware she was not the only woman kept bound and subject to horrific abuse in a hangar of the overrun U.N. compound.

There are no words to describe their "screaming, their cries for help," she said of the women. "What could we do when (the soldiers) came through that door unzipping their pants and walked toward us? We were like lambs, like sacrificial lambs waiting for a knife to slaughter us.”

And yet, she believes her personal nightmare, including the loss of the fetus she had to abort after fleeing Srebrenica, is dwarfed by the weeklong Bosnian Serb killing spree. Many wives, mothers, sisters and daughters of those killed in Srebrenica have dedicated their lives to fighting for the truth about what happened to their partners and male relatives and searching for their remains. And yet, in over a quarter-century, only a handful have publicly spoken of the sexual abuse they suffered during the fall of Srebrenica.

Srebrenica’s Bosnian women were key to the cases brought against the U.N. and the Netherlands over the failure of the Dutch U.N. troops to protect the town’s civilians in 1995. Following this success, the European Parliament adopted a resolution commemorating July 11 as the Day of Remembrance of the Srebrenica genocide.

Although the Srebrenica massacre was branded as a genocide by international and national courts, Serbian and Bosnian Serb officials still downplay or deny the crime. For many Srebrenica women setting the historical record straight about what happened to their male relatives has become their life’s purpose.

"We have to keep fighting for truth and justice in order to prevent the young generations (in the Balkans) from being infected by hate, from seeking revenge,” Munira Subasic, who lost her husband, a son and 22 other male relatives in the massacre said. "I hope that the conscience of the world will awaken and that they will protect us as they protected the Jewish mothers, help us get a law against genocide denial, spare us from the offense and humiliation of its denial.”

"Only then will we and our children start living a normal life,” she said.

Bosnian Serb political leaders have consistently prevented the country from adopting a law that would ban genocide denial, with the Serb member of Bosnia’s presidency, Milorad Dodik, even publicly describing the Srebrenica slaughter as a "fabricated myth.”

What Muslim Bosnian women like Subasic are up against is an "active, institutional and institutionalized genocide denial” by Serbian and Bosnian Serb officials, said Emir Suljagic, the director of the Srebrenica Memorial Center.

"The people who took part in genocide are still alive, and the political class which was deeply invested in (the war crimes) of the 1990s is still in power,” Suljagic said, noting that Serbian President Aleksandar Vucic was a former ultranationalist government minister who, in July 1995, threatened to kill 100 Muslim Bosnians for every Serb killed if the international community intervened to stop the Srebrenica slaughter. Vucic has now rebranded himself as a pro-European Union reformer. Still, it did not stop him from condemning as "an act of betrayal" resolutions passed recently by Montenegro and Kosovo condemning the Srebrenica genocide and banning its denial.

Leaders around the world condemned the appalling massacre and called to criticize any glorification of the perpetrators of genocide and war crimes. British Foreign Secretary Dominic Raab has reiterated the U.K.’s ongoing commitment to supporting reconciliation across the western Balkans.

"Today, we pause to remember the victims and honor the survivors of the Srebrenica genocide," Raab said Sunday. "The United Kingdom continues to play a vital role in ending impunity for these horrific crimes as we have shown by agreeing to provide the prison cell so Radovan Karadzic can serve his life sentence for the genocide," he said, according to the statement published on the foreign ministry's site. Raab also urged political leaders in the region to "reject hate speech, to condemn any glorification of the perpetrators of genocide and war crimes, and to respect the verdicts of international and domestic courts.”

Turkey also commemorated those who lost their lives in the genocide. In a video message, President Recep Tayyip Erdoğan said Ankara will continue to stand with Bosnia-Herzegovina and Bosnians.

The country's Vice President Fuat Oktay on Twitter quoted the statement of Alija Izetbegovic, the independent Bosnia-Herzegovina's first president: "Whatever you do, don't forget the genocide. Because a forgotten genocide is repeated."

"We have not forgotten, we will not forget ... On the 26th anniversary of the #Srebrenica genocide, I commemorate our 8,372 Bosnian brothers who were martyred. May their place be heaven," he said.

Turkish Foreign Minister Mevlüt Çavuşoğlu also tweeted an image that said: "July 11, 1995. We did not forget, and we will not forget the Srebrenica Genocide."

"On the 26th anniversary of the #Srebrenica Genocide, a black mark on human history, I wish Allah's mercy on those who were martyred in this persecution, and patience for their families and our Bosnian brothers and sisters," Çavuşoğlu wrote.