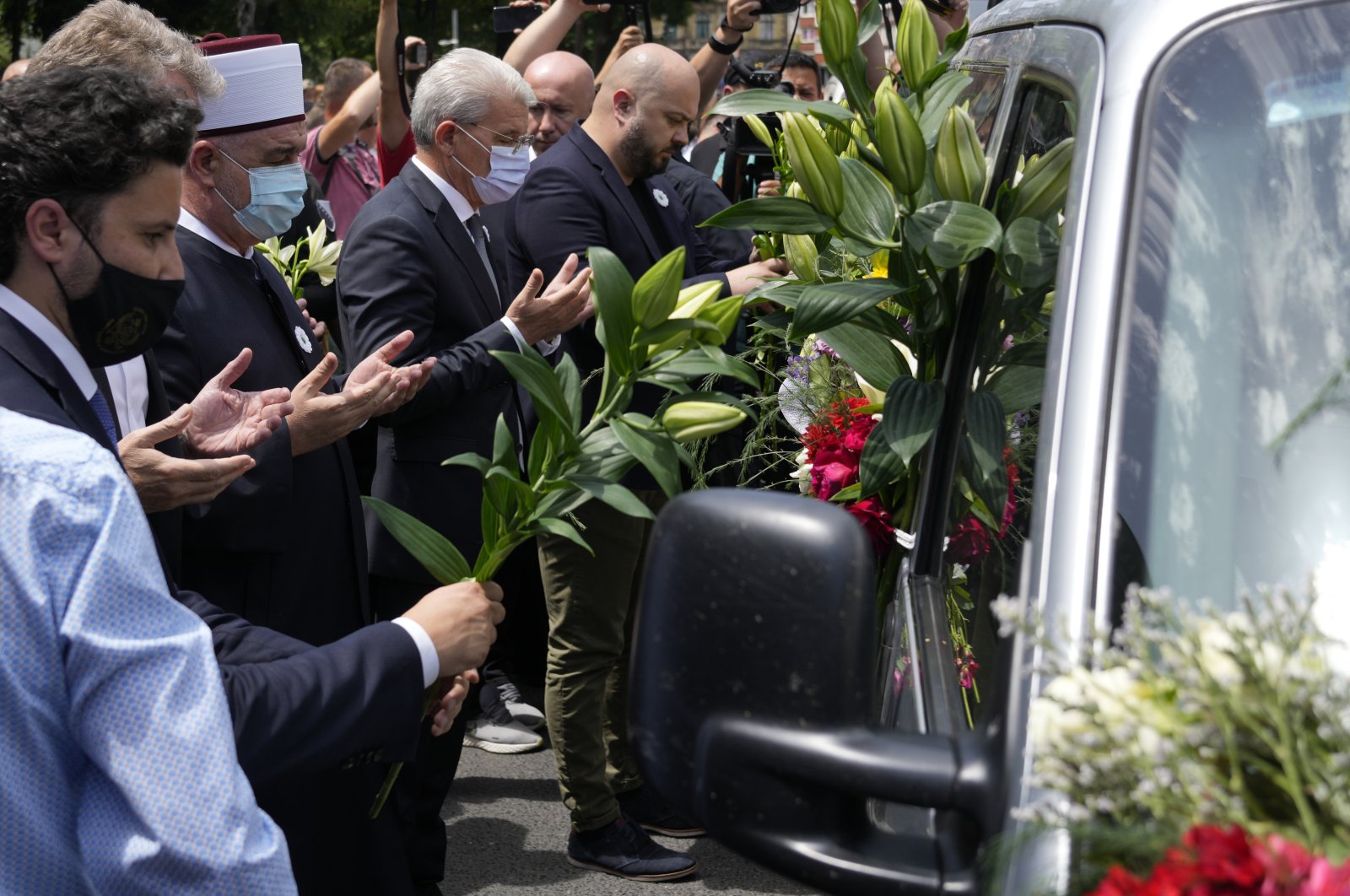 Dignitaries pay respect in front of a motorcade carrying 19 identified bodies of victims that will be buried in Srebrenica on Sunday, Sarajevo, Bosnia, July 9, 2021. (AP Photo)
by Anadolu Agency Jul 09, 2021 11:36 pm
RECOMMENDED

The remains of 19 more victims of the Srebrenica genocide were sent on Friday for burial in the village of Potocari two days later on the 26th anniversary of the 1995 genocide.

Scores of people came out in Sarajevo, the capital of Bosnia and Herzegovina, and the nearby town of Visoko to bid a final farewell to the recently identified victims.

Every year on July 11, newly identified victims of the genocide are buried in a memorial cemetery in Potocari in the eastern part of the country.

After passing by Vogosca, a Sarajevo suburb, the truck carrying the coffins, draped with a large flag of Bosnia and Herzegovina, stopped in front of the presidency near a memorial for children killed in the Bosnian War between 1992 and 1995.

Around 1,500 children were massacred during the brutal 1995 siege of Sarajevo by Bosnian Serb forces.

Husein Kavazovic, grand mufti of Bosnia and Herzegovina, led people in prayers for the departed.

Emotional scenes were witnessed as the truck passed through the streets, with large crowds of people, including women and children, seen crying and praying for the victims.

"I will not forget the victims of the genocide until Judgment Day. This pain is too great," Dzaferovic said.

After Sunday's burials in Potocari, the number of genocide victims laid to rest in the memorial cemetery will rise to 6,671.

More than 8,000 Bosnian Muslim men and boys were killed when Bosnian Serb forces attacked Srebrenica in July 1995, despite the presence of Dutch peacekeeping troops.

The Serb forces were trying to wrest territory from Bosnian Muslims and Croats to form a state.

The U.N. Security Council had declared Srebrenica a "safe area" in the spring of 1993. However, troops led by Gen. Ratko Mladic, who was later found guilty of war crimes, crimes against humanity and genocide, overran the U.N. zone.

Dutch troops failed to act as Serb forces occupied the area, killing some 2,000 men and boys on July 11 alone.

Bodies of victims have been found in 570 different places in the country.

In 2007, the International Court of Justice in The Hague ruled that a genocide had been committed in Srebrenica.

On June 8, 2021, U.N. tribunal judges upheld in a second-instance trial a verdict sentencing Mladic to life in prison for the genocide, persecution, crimes against humanity, extermination and other war crimes in Bosnia and Herzegovina.