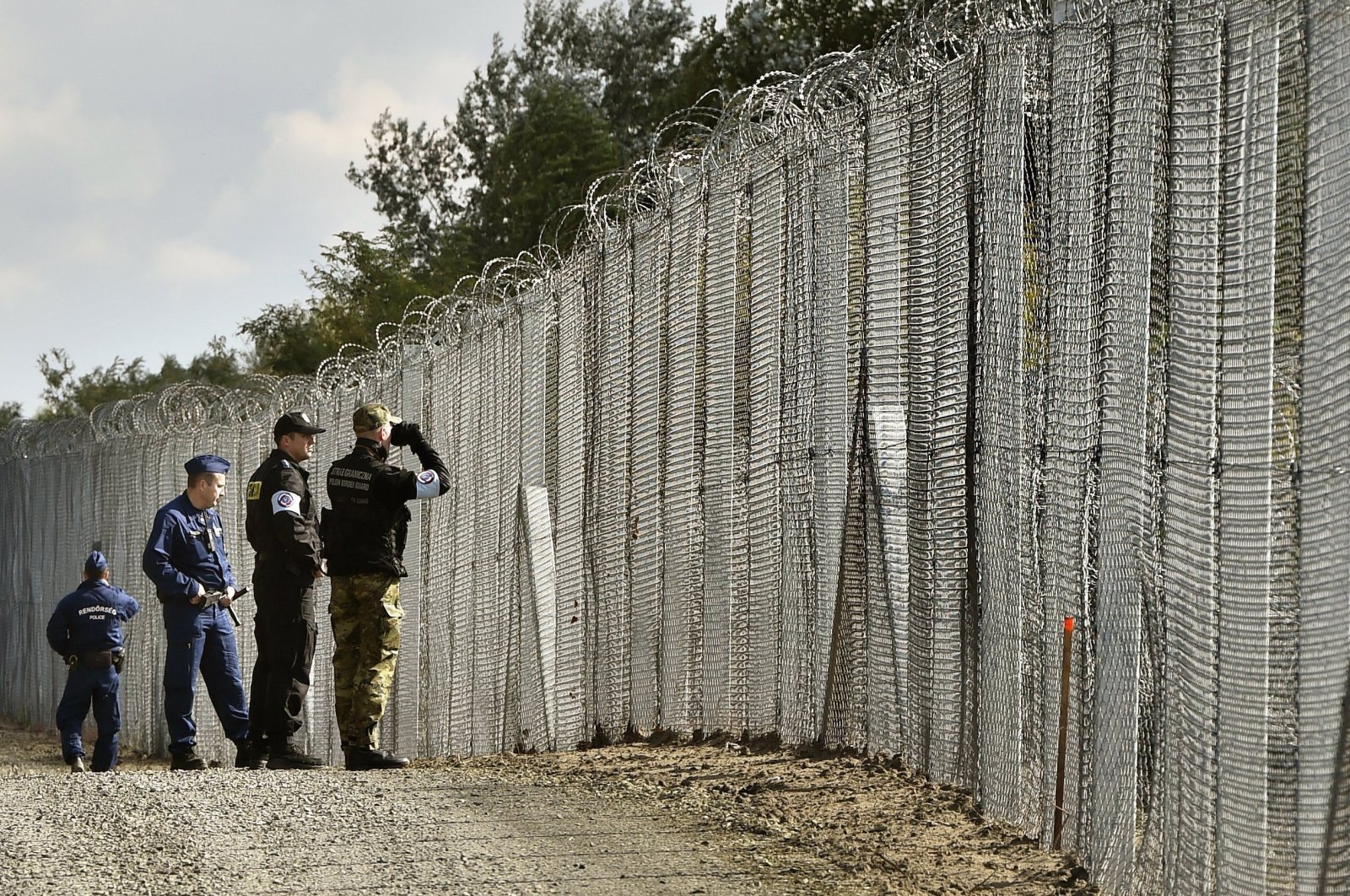 A police officer (2nd R) and border guard (R) of Poland patrol with Hungarian policemen along the temporary border fence on the Hungarian-Serbian border near Roszke, southeast of Budapest, Hungary, Oct.13, 2016. (AP Photo)
by Agencies Dec 14, 2021 9:33 am
RECOMMENDED

Seven people were killed and four others injured when a car with a Serbian license plate carrying migrants crashed into a house in Hungary late on Monday, after its driver refused to stop for a check, police said.

The driver saw that the police were checking cars in the village of Morahalom near the Serbian border and attempted to avoid them by speeding away, police told the MTI news agency on Tuesday.

The car, which was carrying 10 migrants and was headed toward the town of Szeged, then crashed into a house and rolled over, according to Reuters.

Police said that the driver, who was also injured, was detained and proceedings against him would be launched for trafficking people and causing a fatal mass accident.

The accident happened near the border of European Union member Hungary with Serbia, which is not part of the bloc. Prime Minister Viktor Orban's government built a fence in 2015 at the height of the migrant crisis when hundreds of thousands crossed there towards Western Europe.

Car crashes involving migrants and smugglers have been on the rise recently as many people are choosing an automotive vehicle for ways to reach Europe for refuge. Last month, seven migrants were killed while eight were injured in northern Greece after their car collided trying to evade the police near the Greek border with Turkey.

Greek police said the vehicle carrying 15 people had been traveling on a highway from the area of Greece's northeastern border with Turkey toward the north's main city of Thessaloniki when it crashed just after midnight. The six men and one woman were killed in the incident that occurred just after midnight.

The driver of the vehicle – a Moldovan who was allegedly the smuggler and among the injured – tried to evade a police control on the highway, sparking a chase with police. During the pursuit, the migrant car crashed through the highway guard rails and turned over, police said. The nationalities of the people killed were not yet clear, but the injured were all men – four from Pakistan, two Afghans and one Nepali. They have been transported to hospitals in the northeastern Greek towns of Xanthi and Komotini, as Agence France-Presse (AFP) said.

Migrants from Asia and the Middle East seeking to enter the European Union regularly try to cross the Evros River that marks the border between Turkey and the EU member Greece.

Greece is one of the most preferred destinations to enter into the EU for people fleeing poverty and conflict in Asia, the Middle East and Africa. The most frequently used routes for clandestine entries into Greece are the short but dangerous sea crossing from the Turkish coast to nearby Greek islands or crossing the heavily guarded land border between Greece and Turkey.